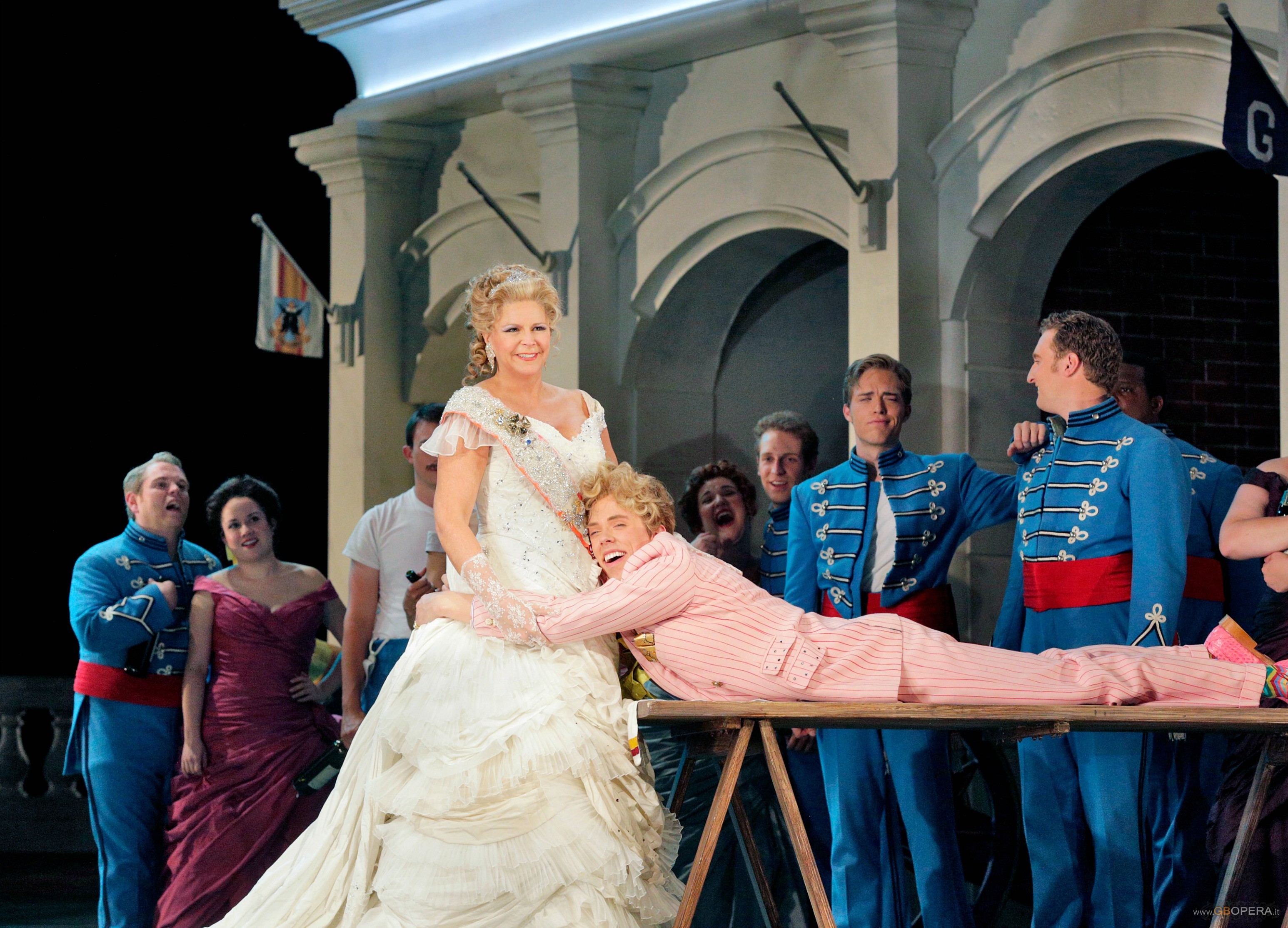 The mezzo-soprano Susan Graham has excelled in French repertoire for many years, and she typically includes operetta numbers and other comic material in her recital programs, her forays into fully staged opéra-bouffe have been rare: her last such appearance was in Offenbach’s La Belle Hélène at the Santa Fe Opera Festival a decade ago, in Laurent Pelly’s production.
The return of the New Mexico native to this stage and this repertoire marked an important occasion, a chance for her to show off two of her greatest strengths before an adoring public. This was a role debut for Graham, and one hopes she’ll return to the Grand Duchess often: she’s a refreshing change from the late-career singers one so often hears in this music. The sensuality that Graham brings to all her singing in French combined with her unerring wit to create a deliciously besotted character as she prowled about the stage, gleefully inspecting cadets and kicking up her heels. Her loony obsession with “militaires” seemed more eccentric than dangerous, however, due to a profound flaw in the staging concept.
Inexplicably, British-born director Lee Blakeley set The Grand Duchess in an American military academy, shortly after the turn of the 20th century, when “jingoism,” a peculiarly American form of nationalism, dominated the public imagination. The catch, however, is that no headmistress of an American military academy (if such a person existed) would have had the power to send her cadets off to die in battle.
Had Blakeley set the piece in one of those steampunk American empires one sees in the old TV series The Wild, Wild West, then his staging concept might have worked. He didn’t go that far: instead, he simultaneously made Offenbach’s operetta more immediate and more trivial. In the process, he lost every particle of the librettists’ intended satire of Napoléon III’s adventurism and rising German nationalism in 1867.
Indeed, the Festival’s marketing of this opera — featuring a cougar in a tiara, a reference to the current American slang term “cougar” that describes an older woman in pursuit of younger men — suggested a distinctly lowbrow approach, which the Midwestern American setting would confirm, the (demonstrably false) presumption seeming to be that American audiences won’t sympathize with characters who aren’t American. Similar thinking may have informed the inclusion of Walt Whitman in Theodore Morrison’s Oscar, also seen at Santa Fe this season.
In a decision even harder to explain in dramaturgical terms, Blakeley translated only the dialogue, while leaving the songs in French. However, the production benefited from the inclusion of a great deal of restored material, from an edition prepared by Jean-Christophe Keck, for which English translations presumably aren’t available. The restored material includes an expanded scene for Fritz and Wanda, an expanded Act II finale, and a meditation for the Grand Duchess, which do a great deal to round out the characters and to heighten interest in the plot. Emmanuel Villaume conducted a bit too vigorously at times, drowning out the singers, but he supplied every bit of the necessary effervescence and charm.
Ultimately, it was rather like watching an alternate-universe production of the Broadway musical The Music Man in which everybody sings about killing people. Nevertheless, the evening was great fun, animated by Peggy Hickey’s delightful choreography; costume designer Jo van Schuppen took full advantage of the possibilities of the period setting. Only occasionally did the illogic of Blakeley’s concept interfere with one’s enjoyment of the performance, which featured several of the United States’ most gifted singing comedians.
First among these are bass-baritone Kevin Burdette as General Boum and baritone Jonathan Michie as Prince Paul, who combined glorious singing, resonant voices, and crystalline diction with exuberant physical interpretations: Burdette performed a gymnastics routine in one number, and Michie seemed at all times to be made out of elastic. With clarion-voiced tenor Aaron Pegram as Baron Puck (depicted here as a Roman Catholic clergyman, for some reason), they formed a winning team of schemers.
As Fritz, tenor Paul Appleby built on the excellent impression he created last season at the Metropolitan Opera as Hylas in Berlioz’s Les Troyens (the same production in which Graham returned to her superb interpretation of Didon). His Fritz was always sweetly sung and theatrically engaging, though his vocal stamina began to flag during Act III. He, too, threw himself into his physical portrayal — so much so that he injured himself during one performance. His beloved Wanda, soprano Anya Matanovic, displayed a great deal more spirit and personality than the usual operetta soubrette ever does, and one could imagine her becoming a formidable despot herself, one day. Photo Ken Howard