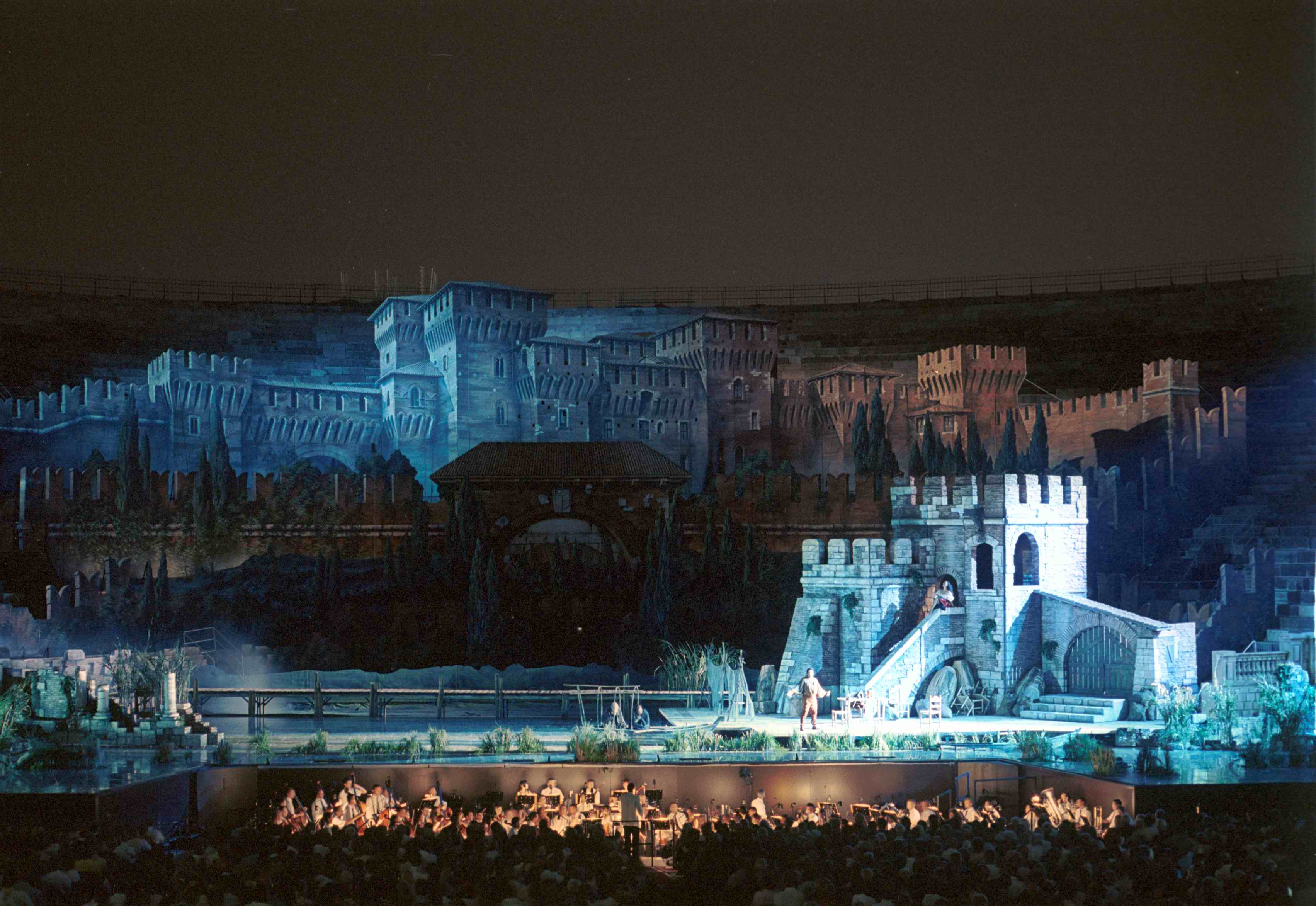 Once again, the weather was the real protagonist at the centenary edition of the open-air, summer, opera festival at Verona’s Arena.  On the opening night of Rigoletto, a revival of the 2003 Raffaele Del Savio production, a gradually strengthening wind eventually got the upper hand as the evening progressed.  The already extremely lengthy scene change in the last interval, saw the back-stage staff struggling against contrasting winds to build Sparafucile’s house, only to have a swaying, monumental, Mantuan,  sky-line, come partially crashing down. After attempts to raise it were followed by a second collapse, all other attempts were abandoned in the face of an impatient audience.  A few rounds of  “olá”, which involved the whole arena including the orchestra, established a sort of camaraderie and restored the audience’s good humour, allowing the performance to continue on the best of terms.
Leo Nucci, in the title role, brought all his class and style to a part which has become synonymous with his name. The former vocal power and  range of colour and dynamics are not what they used to be, but the mastery of his interpretative and stage-craft skills are, and he communicates the psychological complexities of the tragically sympathetic character without ever relying on the grotesque or histrionic. Generous to his audience, he encored ‘sì, vendetta’ and climbed up the ‘gradinata’ at the end to greet his admirers.  Alexsandra Kursak‘s Gilda, was characterized, both vocally and dramatically by the freshness and simplicity of a young girl. The emission was firm and clean, and the phrasing  graceful, especially in the lyric soprano register. A very sober coloratura throughout, though, without fireworks in ‘Caro nome’, and when  obliged to sing the customary e-flats, in both ‘Caro nome’ e ‘sì, vendetta’, they were just hinted at.  Saimir Pirgu’s full-bodied and exuberant singing, made him a particularly credible, disguised student in the first act, and a thoughtless rake in the third.  His sound was round and ringing and even throughout the entire range. However, there was little contrast in dynamics and colour in his performance, and his phrasing resulted direct, rather than elegant and seductive.
Andrea Mastroni as Sparafucile revealed a dark and interesting vocal quality, with  which he coloured and characterized his role. He sang both the extremely low and high notes with ease, without over emphasizing them, giving the impression of casual aplomb.  Anna Malavasi‘s Maddalena was vocally unwieldy at the beginning of the third act compared to the other solo voices, but became more focused as the act progressed.  Abramo Rosalen‘s Monterone declaimed the anathema with a suitably strong and harsh voice. Irene Favro’s Page, could have been clearer.  A fine performance by Milena Josopic in the small role of Giovanna. The other singers, Marco Camastra, Saverio Fiore, Dario Giorgelè, Vittorio Garcia Sierra and Stefania Abbondi as respectively, Marullo, Borsa, Count Ceprano, an Usher, and Countess Ceprano were musically and theatrically precise and appropriate.
A certain perplexity regarding the orchestra. Throughout the evening, the sound was subdued, controlled and uniform, resulting in a certain flatness. When, in two distinct moments, the sound of the solo cello and the solo violin seemed to come from the back of the orchestra, behind the trombones, the doubt arose that a sound system was controlling the audio. The conductor, Riccardo Frizza, got through the evening without musical mishaps, but without any particularly memorable moments. The men’s chorus was appropriately goliadic when called for, and on the whole were  compact and expressive, especially in their strong dramatic moments. Unfortunately in fortissimo, there’s a tendency to yell which distorts the sound. The monumental sets, effectively recreate the  town of Mantua.  The overall effect is both realistic and grandiose, elegant and picturesque. There is a fixed sky-line looming in the background including the Ducal Palace, the town walls, gardens, and other recognizable features. The foreground sets, where the action takes place, change according to the scene. All are exquisitely depicted.  The first scene, with its ashlar rustication, waterworks, bridges and balustrades, with a suggestion of the surrounding marshes, is reminiscent of the  pleasure palace devoted to profligate pursuits of the Gonzaga Palazzo Té on the outskirts of Mantua.  The second scene is the faithful reproduction of a typical town courtyard complete with out-door staircase,  well and garden, flanked by a lane which crosses the stage diagonally. The last act, is a very evocative  representation of Sparafucile’s rustic hostelry replete with lake, mist, reeds, jetty and a slowly moving boat. The costumes reflect the rich subdued colours of tapestries.  Only the garish costume of the court jester stands out.  The direction, by Ivo Guerra follows the tight and dramatic story-line, in a natural and unobtrusive way, except for the introduction of writhing Nereids and Tritons(figures much represented in the two existing palaces),  who are used to underline and emphasize particular considerations: in the first scene to underline the lascivious pastimes of the court, and in the second scene, transformed into spirits, to enact the  rape of the nurse in the kidnap scene alluding to Gilda’s fate.  Photo Ennevi for Arena di Verona