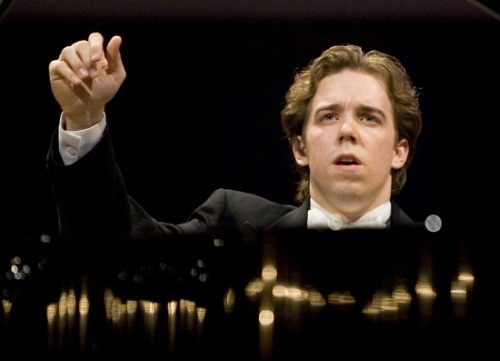 The one recital included in this year’s Accademia Filarmonica concert series was given by the young Austrian pianist Ingolf Wunder, second prize winner at the prestigious International Chopin Piano Competition at Warsaw in 2010, and already launched on an international career. The programme was a rich offering from the grand Romantic repertoire.  It was framed by Beethoven’s universally popular “Moonlight Sonata” , written in 1801, and a work which is often considered Liszt’s greatest for the solo piano, Sonata in B minor, written in 1853.  Between these two sonatas, Wunder presented a captivating choice of pieces, rich in cross references, by Chopin, Schubert, and  Schubert arranged by Liszt.  The programme was a luscious treat of works, as irresistible for their melodic and harmonic beauty as for their exhilarating  virtuosity.  Embarrassingly, Wunder had to recompose himself three or four times before he could attempt to begin the “Moonlight” sonata, (closing doors, mobile phone, late-comers, talking, handbags opening and closing) and when he did, it was still without the sort of quiet needed to create the necessary atmosphere for this rarefied beginning. And, despite everything, rarefied it was, with the opening broken chord accompaniment almost imperceptible. For the entire first movement, the  accompaniment never rose above a murmur beneath the rise and fall of the main melody, an effect he repeated in the staccato accompaniment, in the opening verse of Ständchen later in the programme.  In the first piece of his Chopin group, Nocturne op. 9 n°3, he similarly continued to privilege the spun melodic line over an increasingly complex plaiting of counter-melody, coloratura ornaments and left-hand  arpeggio accompaniments. His approach to the Ballades was  measured and lyrical.  He did not tug at the phrasing, nor dwell on the exquisite dissonances, nor  exact  tension before the resolution of harmonic suspensions, but  neither did he allow himself a degree of abandon in the dramatic passages or the extemporizing moments.

The second half of the concert began with the most technically demanding of Schubert’s Impromtus, op.142 n°4, written in 1827 and published posthumously.  Wunder attacked the dazzling challenge of the scale runs, arpeggios, broken chords, the rapid thirds passages, and trills with dexterity, but failed to exploit the off -beat rhythm and whimsical theme in this free-form musical  composition with its character of ex tempore improvisation.  His choice of tempi were rather measured overall in the evening’s programme and here, as in other moments during the evening, an excessive use of the pedal blurred the harmonic and rhythmic clarity, as did  a certain nonchalance, at times, for the odd wrong note.  Liszt’s arrangement of the simple but moving Schubert serenade, “Ständchen”, was the perfect transition to the last work on the programme, Liszt’s monumental Sonata in B minor.  The yearning and  transparent lied, transformed into the more sonorous piece, denser and thicker texturally, led the way into the  impressive musical architecture of the Sonata. Made up of only one grandiose movement, the sonata goes beyond the confines of the  orthodox form of this period, expressing all that is profoundly technical, passionate and emotional in phrases of great breadth and power.  Wunder undertook an intense dialogue musically and physically, with the work, but  an extra notch of power would not have been amiss.  A relaxed and easy stage-presence, encouraged by insistent and enthusiastic applause, Wunder delighted the audience with three contrasting encores.  The first, was Chopin’s  Fantasie Impromptu(1834), written  in the same key as the  opening work of the concert, the Moonlight Sonata, which  Beethoven had also subtitled “almost a fantasy”.  Interestingly, Chopin’s Fantasie  also contains similarities to Beethoven’s work.  Two measures after the melody begins, an abrupt run up and down has exactly the same notes as the cadenza in movement 3 (Presto agitato) of that work. The climax on a six-four chord is similar in both pieces.   Also, the Fantaisie-Impromptu’s middle part and the second movement of the Moonlight Sonata are in D-flat major.  Whether by chance or design, it was an interesting choice of encore which enriched the fabric of cross references in the programme.  The second encore was “Etincelles” (1886), by Moritz Morowski, which as the name, “Sparks”, suggests, is a show piece which the pianist rendered in a dazzling display of brilliance and levity.  And to end on the same theme as the beginning, “Clair de Lune” (1890-reworked 1905)by Debussy, played with delicacy in an intense  and enchanting mix of atmospheric colours, dynamics and rhythmic ebb and flow.