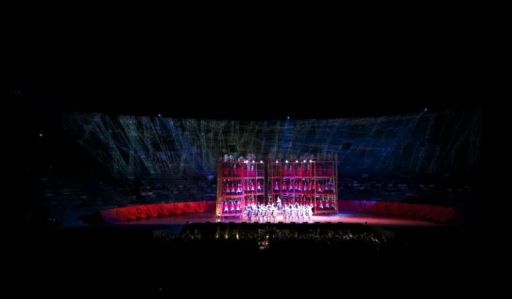 The audience is the real star of the Arena. A packed Arena is what  gives the input to make a performance memorable and exciting. So it was desolating to experience the spectacle of an almost empty shell of the Arena at the second of only three performances of Gounod’s Roméo et Juliette on Wednesday 4th September. This opera, the last to be mounted in this season, due to the notorious literary, though spuriously factual connection of its story to the city of Verona, since 2011 has become an annual fixture in the Arena programme alongside Aida. The commercialization of Romeo and Juliet is evident all year round and in every possible venue in the town.  The most implausible topographical locations from Shakespeare’s imagined Verona, have become pilgrimage sights even to the more  sceptical.  In this context, it is natural that the Arena in the wake of this popularity would  also capitalize, in its own sphere, in the overwhelming interest in this subject matter, and propose operas and ballets on this theme.  In fact, Bellini’s Capuleti e Montecchi is the last opera of their 2013 winter season in the Teatro Filarmonico in November. Perhaps the fact that another version of Romeo and Juliet, a much publicized musical in October, is present in the Arena this year has deflected the attention from the Gounod version.
Whatever its merits or defects, at least the Gounod opera saves us from the tawdriness and banality of  what’s on offer to the tourist in Verona  regarding the omnipresent Romeo and Juliet. As for its merits, the sets and costumes are an intelligent mix of Elizabethan, contemporary, and futuristic, anchoring the story in its original period but merging it timelessly into an undefined present or future.  The sets and costumes would not be out of place in a rock musical and nor would  the staging, which is youthfully physical.  The main male characters spend their time climbing ladders, scaffolding and ivory towers, or duelling in suspended wire cages.  The mobile globe-theatre-like scaffolding, built from a cluster of ladders and lances, effectively gathers and distributes the crowd scenes in its three tiers, like so many balconies, from where its occupants witness and comment; an amphitheatre within an amphitheatre. Striking and  effective, the other mobile sets, especially Juliette’s tower of intricate, beaten metal work which simultaneously creates a focused space,  atop a exquisite and monumental set, which provides the wider setting.  This scene, the duel scene in the wire-cage, the arrival of the Duke of Verona perched high on a golden feathered float and the out-sized metal wedding dress of Juliette, all elevate their characters onto a higher plane, projecting the particular musical and dramatic moments.  On the whole, the historical blend of costumes worked; the stylized, minimalist Elizabethan chorus, the  punk, gang factions, with crested and coloured haircuts and their bikie line-up as the two biers carrying Mercutio and Tybalt were carried out.  A modern leather jacket thrown over Romeo’s shoulders was not out of place over his Elizabethan boots and britches.  The futuristic hooped dresses lent levity to the ballet and Juliette’s balletic costumes were youthful, graceful and simple.  Luckily, so was this Juliette’s figure. The atmospheric use of hundreds of candle lamps during the love scenes,  was counter-balanced by the noisy and distracting substitute of Queen Mab’s carriage.  This mirth arousing batmobile was certainly light-years away from Shakespeare’s original gnatmobile, even if the sadomasochistic passengers did mime out the dark, underlying sense of Mercutio’s tale. Then there was the banal and trite finale at the very end.  Two enormous backdrops, unfurled to form a heart with dove-like wings surrounded by peace logos, while Romeo and Juliette, rose from their tomb-slab and climbed up the sort of mobile ladders used in Italian cemeteries to reach tomb niches, before tearing themselves apart, to run down separately into the stalls, join again in front of the conductor and then run down the middle aisle into the sunrise.  A Hollywood ending?
As mentioned in previous articles, the amplification resorted to in the Arena performances, hinders any objective judgement, especially where the power and volume of individual voices and the ensuing psychological support and serenity that such amplification ensures, is concerned.   In any case, Marina Rebeka was an enchanting Juliette; her clean emission and round, vibrant quality captivating in the full lyric moments, especially in  the middle register.  However, dynamic contrast was almost completely lacking from the performance, and  the extreme top notes resulted a little thin and strained.  Francesco Demuro was convincing as a poignant and love forlorn Roméo.  He gave an intense performance, although not having a big voice, he had to fight with all his strength to get the dramatic scenes across, especially those involving ensemble and chorus.   Sanja Anastasia‘s Gertrude seemed a vocal caricature of  the nurse and Nino Surguladze‘s  young page Stéphano was vocally cumbersome and heavy-handed.  Michael Bachtadze was an incisive presence as Mercutio and Paolo Antognetti’s Tybalt was measured rather than forceful.  Enrico Marrucci was a strong and expressive Capulet, although at times the voice tendered to quaver.  The Duc de Vérone, Deyan Vatchkov, was rather stiff and his phrasing lacked ductility.  Francesco Pittari as Benvolio, Dario Giorgelè as Gregorio and Nicolò Ceriani as Pâris,  were precise and appropriate in their parts.  The most impressive performance of the evening came from Giorgio Giuseppini whose Frère Laurent was theatrically and vocally engaging. His voice full, firm and even, his emission and articulation clean and clear, his French diction comprehensible(he alone), all contributed to creating an authoritative stage  presence.  The elegant conducting of Marko Letonja, propulsive and joyous in the crowd scenes, tender and fervent in the intimate scenes could not avoid the odd unsynchronized stumble in the orchestra. On the whole though, the orchestra played cleanly and with style, paying attention to the atmospheric colours and effects. Photo Ennevi / Fondazione Arena di Verona