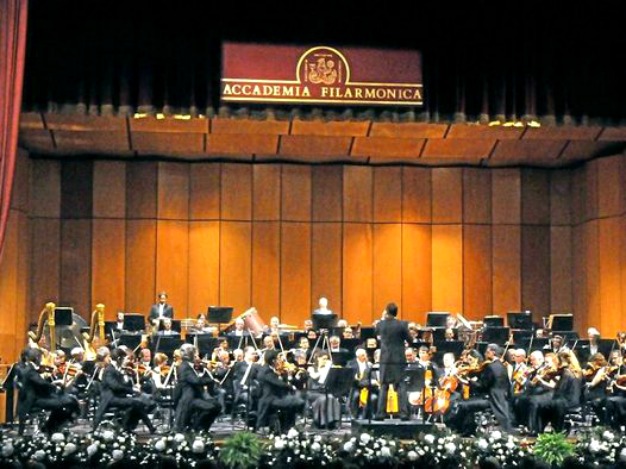 For the last 22 years, during the month of September, the concert going public in Verona is treated to a series of concerts by world renowned orchestras, conductors and soloists organized by the prestigious and antique(founded in 1543)cultural institution  of the Accademia Filarmonica, at the Teatro Filarmonico.  For almost 500 years the Accademia has fostered the highest levels of cultural scholarship and performance in Verona, including a performance by the young Mozart, and continues to do so in its beautifully frescoed Sala Maffeiana and elegant Teatro Filarmonico.  In recent years, the likes of the Chicago Symphony, the Vienna Philarmonic, and the London Philharmonic has graced its stage, and next year will see the debut of the Berlin Philharmonic.
The inaugural concert of this year’s season on Saturday 7th September, was entrusted to Italy’s National Symphonic Orchestra of the RAI(the Italian broadcasting commission), which is based in Turin, in an impressive programme constructed along an interesting philological vein. The order of the programme was chronological, passing from Debussy’s, “La Mer”, to Ravel’s, “Daphnis et Chloé”(Suite n°2), to Stravinsky’s “Le Sacre du Printemps”, presenting three works by three composers whose relationships, work and study intersected in the vivacious cultural scene of  turn- of-the-century Paris, in the ten years between 1903 and 1913.  It was fitting, that amidst the plethora of this year’s centenaries and bicentenaries, that the centenary of the first performance of Stravinsky’s explosive  and epoch-making “Le Sacre du Printemps”, on 29th May, 1913, was not forgotten.
The  supernumerary orchestra, required by the programme, including 15 individual percussion instruments,  the 8 horns of the Stravinsky,  4 of which doubled on the Wagner tubas, was conducted by the young Slovakian conductor, Juraj Valčuha.  Firm in his musical intent, sustained by a clear and precise gesture,  particularly communicative and varied in his expressive range, he led the orchestra with vigour through the rich and refined musical course provided by the programme.  In “La Mer”, written between 1903-05, the descriptive devices and the suggestive and subtle depiction of the ocean, wind and waves, the daring impressionistic harmonics, the sensuous tonal colours, the rapid and changing fragments of images, the continual change within an architectural structure of great breadth, the animated sequences of of internal tonal and rhythmic material, the interplay of overlapping effects, the atmospheric creation of an impression of reality, and the intrinsic restlessness, where the melodies lose their romantic function and become an idea of a melody, ambiguous and evocative, were all rendered clearly in every section of the orchestra.
They responded with even greater intensity in Ravel’s popular  “Daphnis et Chloé” suite n°2,  from the ballet commissioned by Diaghilev for the Ballets Russes,  in 1912.  Its prodigious orchestration and colours, reflecting the celebration of sensual love,  rich with suggestive melodies and lush harmonies, luminescent in the Lever du Jour with its progressive, orchestral awakening, was palpable in the shimmering strings and pulsating wind instruments: the winds who became the real protagonists in the brilliant whirling and eddying, of the final orgiastic feast.
Stravinsky stated that “ Daphnis and Chloé” was one of the most beautiful works of French music.  Both he and Ravel were fellow members of a Parisian group of artistic outcasts called Les Apaches and shared a genuine mutual admiration. But although Ravel was a real advocate of Russian music, of spontaneity in orchestral colour and of exoticism, they differed in personality and their approach to music. Ravel applied the aesthetics of his mentor Debussy, while Stravinsky, as most strikingly witnessed in “Le Sacre”, made a real departure from romanticism.  His “Sacre”, like Ravel’s “Daphnis”, was also commissioned by Diaghilev for the Ballet Russes.   Considered one of the most influential works of 20th century, it pushed uncompromisingly to the extreme musical limits, and included amongst its novel features experiments in tonality, metre, rhythm, stress and dissonance. The second half of the programme dedicated to the “Sacre” gave the orchestra the opportunity to measure itself in the expression of the savage and cathartic energy intrinsic in the atavistic primitivism, in the complex metrical character, duple against triple time, in the irregular beats emphasized by the powerful percussion, and to make sense of the scattered elements of the musical language. This they did: the  harmonic movement as slow as a glacier, grasping the rhythmic invention and vitality, and highlighting the distinct roles of both  individual and small groups of instruments written in chamber fashion, within the fabric of the enormous orchestra. The wind, brass and percussion sections excelled for precision, power and colour and were hailed triumphantly at the end.  The haunting and plangent bassoon solo, the silvery arabesques of the flute, the snarling brass chords were exemplary and representative of the quality of each section as a whole.  Completely out of context, was the hit and thrust viola solo disappointingly devoid of any pathos, at the beginning of the encore, the Intermezzo from Puccini’s Manon Lescaut.  The passionate and heart-rendering intermezzo should have offered the perfect contrast to the preceding Stravinsky.  Puccini isn’t Stravinsky and “Manon Lescaut” isn’t “Le Sacre du Printemps”!! Photo Brenzoni / Pressphoto