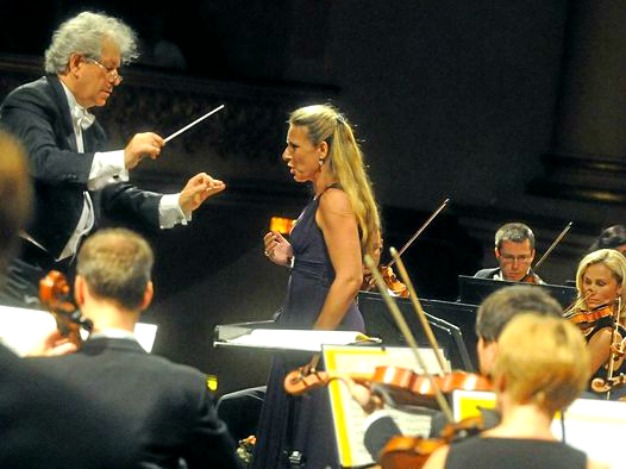 The youthful and relatively recently founded Prague Philharmonia was the guest of the third concert in the Settembre dell’Accademia concert series  dedicated to visiting orchestras. The internationally established and esteemed orchestra, in this occasion, was conducted by its founder  Jiří Bělohlávek.  Prague, with its antique and glorious musical traditions lies within the cultural sphere of both Beethoven and Wagner, the two composers represented in the concert.  Although the Prague Philarmonie is a small sized orchestra, in the tradition of the Viennese orchestra of the classical period,  this didn’t prevent them from honouring Wagner in the year of the bicentenary of his birth.  For even in Wagner’s day, reductions of his works  were known to circulate and it is said that arrangements for small forces, the famous Coburg versions, so named after the place of their presumed first performance, were allegedly authorized by him.   However, it must be admitted that the resulting sonority is consequently less dense. In the first half of the concert the  orchestral excerpts offered were three of the most moving and emblematic of Wagner’s works;the stately gravity of Wotan’s farewell, the scintillating flickering of the Magic Fire Music, the tragic  breadth of Siegfried’s Funeral Music woven with an eloquent eulogy of  leitmotivs, and the yearning of the prelude and the rapturous ecstasy of  the “Liebestod” from Tristan und Isolde.  The conductor was not given to grandiloquence nor facile theatrics, but held the thread of the multiple voices and dynamics lucidly and with calm control.  His secure gesture was both expressive and incisive, illuminating the hidden leitmotivs and overlapping phrases, while spinning out the grand over-arching musical lines. The orchestra responded sensitively to his guidance. If the wind section wasn’t always perfectly accurate or well modulated, the string section absolutely shone. Precise and brilliant in the technical passages, compact and warm in the deep and rich sustained melodies and motives.  In the Liebestod, the soprano Annalena Person gave an admirable performance, passing seamlessly between registers, but tending to privilege a declamatory style over a more  linear and sustained soaring vocal line.
In the second half of the programme, and with further reduced forces, the orchestra came into its own, with a beautiful performance of Beethoven’s 7th Symphony. The finesse of the phrasing, the homogeneity,  lustre and vibrancy of the string sound, and the energy and vigour in the rhythmic and technical passages contributed to make it an effulgent execution led with assurance and elegance by  the conductor.  From the beginning, the transition from the majestic opening poco sostenuto with its long, taut ascending scales, to the dancing and pulsating vivace, the orchestra immediately demonstrated their capacity for delicacy and levity of style. The  buoyancy they maintained in the following dotted rhythms, the attention to articulation, their whirling in the third movement minuet and  expansiveness in the trio,   the joyous, accented and dynamic last movement  and the progressive blossoming of the splendid allegretto from its initial ostinato were all elements of  accomplished ensemble playing. A work with a particular connection to Prague, the capital of Bohemia.  It was composed it  between 1811 and 1812 while Beethoven was improving his health in the Bohemian spa town of Teplice! Principal Photo Brenzoni