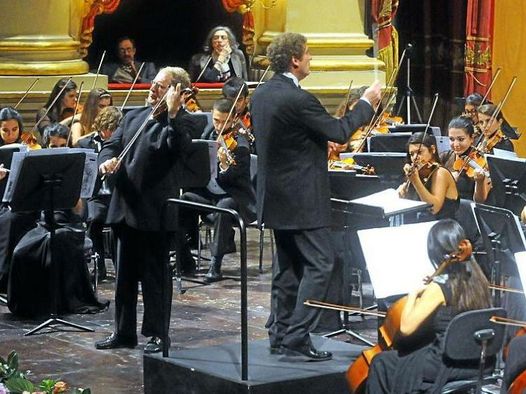 This season, the Accademia Filarmonica which has a long tradition of supporting and promoting emerging talent, has included three orchestras made up of young musicians, in their programme. The first to take the stage, on Tuesday evening 17th, was the Turkish Youth National Orchestra, made up players from 16 to 22 and conducted by its founder Cem Mansur.  The results of their work are extraordinary, especially in the string section, considering that this is the first project of this type to take place in Turkey, a country which doesn’t have the consolidated musical traditions of its European counterparts. What was evident, was the serious and rigorous technical preparation and the  great attention paid to amalgamating each individual performance within the section.  Under the expert guidance of Mansur, and a varied choice of programme which provided a showcase to individual players as well as separate orchestral sections, the players charged their well-channelled energy, enthusiasm, and total involvement into an impressive performance.  The first part of the programme was dedicated to Beethoven, opening with a fresh though very straightforward rendition of the Leonora Ouverture noteworthy for the clean, compact and disciplined fast scale passages in the first violins.  In the following Beethoven violin concerto, they were joined by the renowned Russian Israeli violinist Schlomo Mintz who unfortunately didn’t seem in form on this particular evening. Only spasmodically were we graced with a sweet enrapturing sound.  He appeared stiff and his bow arm rigid.  His playing was marred by uncertain intonation and splashy bow work.  It was in the cadenzas and the virtuoso encore, Kreisler’s Recitative and Scherzo, that we were given a glimpse of his extraordinary talent. The second half of the concert opened with Rossini’s ouverture from Guglielmo Tell, with an intense and  commanding solo from the principal cello, well backed by her four fellow solo companions.  Further into the ouverture however, and especially in the alpine themes,  the winds were consistently loud and overly present.  Hommage was rendered to an important Turkish cultural and musical figure, the composer Ferit Tüzün, prematurely deceased, with the inclusion of  his charming Suite, Esintiler.  But it was The Galanta Dances by Kodaly that showed the orchestra to its best advantage. The traditional Hungarian verbunkos style, alternating slow figures, swaggering melodies, foot-stamping rhythms and fiendishly fast passages gave scope to all of them to give a bow: the slow and sensuous clarinet of the first dance, the lively second flute of the second, the oboe in the third, and the fourth and fifth in quick succession, increasing in speed and a whirl of excitement until the end. A triumphant reception to which they generously offered a substantial encore with the Ballabili from Macbeth, in honour of  Italy and Verdi in his bicentenary.