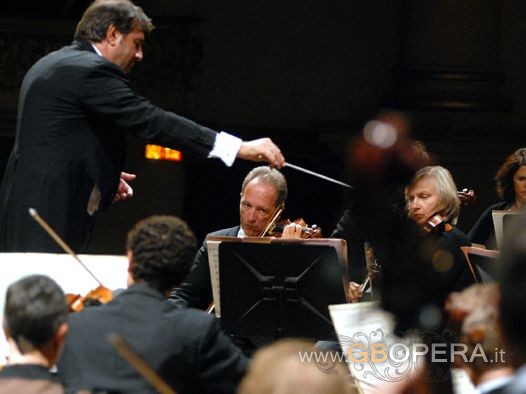 The prestigious Mahler Chamber Orchestra conducted by Daniele Gatti played to a packed hall in the second last concert of the Accademia Filarmonica’s  Concert Season in Verona last night. The orchestra, presented a programme of works from a repertoire with which they have a particular affinity, as their name itself implies. This orchestra, formed on classical proportions, retains a core string section, to which it adds the necessary  wind instruments,  according to the scoring, as it did in the second work of the evening, Mahler’s Rückert Lieder, sung by the renowned German baritone Matthias Goerne.
From the opening bars of the first work on the programme, the Siegfried Idyll, a homage to Wagner in the year of his bicentenary celebrations, the quality of the string playing was immediately apparent.  The suffused stillness  at the beginning, emerging imperceptibly with an intense warmth of sound, the taut and smooth pianissimo legato line, the separate sections compact and homogeneous while maintaining vibrant individual performances, created a rarefied atmosphere that was to be maintained for the first half of the programme. The orchestra responded with transport at the slightest hint from the conductor who accorded great relief to accents and sudden dynamic contrasts creating beautiful shades of colours, surges of sound and incisive effects. The performance was characterized by a sensitive musical rapport both between  individual players, and the different sections. Phrasing was shaped with care and beauty.  Gatti maintained a strong, overall  architectural line reflected in his clear and expansive style, without losing sight of  the underlying details.  Individually the winds played expressively and with technical expertise, although often the entries of their ensemble  resulted untidy, and at times the balance was not calibrated.
The intimate and reflective Rückert Lieder were rendered with interpretative and vocal elegance by the firm and generous voice of Matthias Groene.  The range of  contrasting spirit,  from the light-hearted, Ich atmet ‘einen linden Duft to the  eerie Um Mittenacht  were delicately woven into the rich and varied individual  orchestrations and masterfully interpreted by Matthias Goerne.  He changed mood and colour with agile ability, spinning out light, ethereal, introverted sustained passages from Ich bin der Welt abhanden gekommen, and sweeping into its broader deeper phrases with ease and power.  His rich cavenous vocal quality expressed in turn grimness and triumph in Um Mitternacht accompanied by solo woodwind, tympani, harp, piano and celeste in a most suggestive scoring.  In Liebst du um Schönheit, orchestra and singer breathed together in beautifully moulded phrasing.  Goerne  moved with ease throughout the wide range, and in all registers. Noteworthy throughout, the individual orchestral soloists from the winds and the concert mistress.
There was a distinct change of spirit, from rarefied to energetic, in the second half of the programme dedicated to Beethoven’s third symphony. The youthful orchestra under Gatti’s firm and decisive guidance, highlighted each musical element in the dense score with clarity and attention to detail.  In the first movement, with its syncopated rhythms and harmonic tensions of its dissonances, in the second with its the fugato, in the quiet brilliance of the third and in the variations of the last movement, they demonstrated a whole-hearted involvement in the great range of emotional expression.  While fluid and propulsive, the constantly driving pace of the chosen tempi in the first two  movements however, left little time for breathing space, depriving the music of a sense of largesse, the  weight and heightened tension of which would have contributed to a greater dramatic impact.   The performance was a resounding success, but no amount of coaxing could elicit an encore.