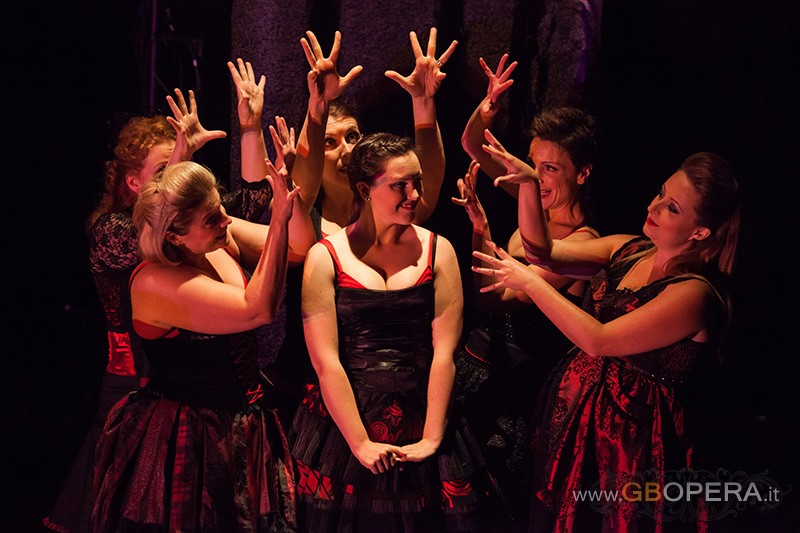 From  hipster Brooklyn, to Toronto, and Philadelphia there is much ‘buzz’  among young American composers about that “..most expensive and impractical of art forms”: opera. Opera companies are supporting efforts to bring new life to an old form and new young audiences to the old standbys. Major theaters like the Met with it’s Two Boys provide the high profile productions, but  it is the smaller companies, and “Indies’(Independents) who supply creative ferment, trying to find the musical alchemy that turns present day sounds and stories into that exciting synthesis known as opera.  But where does that alchemy come from? Composer Ana Sokolović seeks to brew it from her Serbian heritage, using not only the vocal styles of her native culture but in Svadba-Wedding, the rituals as well. Here, it is a female ritual,  Bridal Shower which traditionally takes place the entire night before a Balkan Wedding when the Bride’s girlfriends prepare her for her upcoming nuptials, doing her hair, bath, gown, chattering, reflecting and playing.Commissioned and produced in Canada at Toronto’s Queen of Puddings Musical Theater, the Philadelphia Opera in cooperation with FringeArt has brought the production virtually intact, for its Opera In the City Series to FringeArt’s small and newly renovated theater-space.
Ideal for such a venue with six a cappella women-3 high voice and 3 low, the piece is 90 minutes long in seven vignettes. Conducted from a roped off audience seat by Musical Director Dáirine Ní Mheadhra the music is true to its vignette form, with short and distinct sections and styles.  Complex and very well crafted, Sukolovic alternates between rhythmic deconstructed speech outbursts, close modal harmonies, and some haunting monodic tunes. The piece opens with the piercing “call” style of singing  which harks back to the Serbian tradition of calling over the hills in the north. The soloists sing the close modal harmonies extraordinarily well in tune and with remarkable clarity, textual and rhythmic accent. Ms.Sokolović deconstructs the Serbian text using rhythmic repeated syllabic outbursts and plosive Slavic consonants to effectively portray the girls’ energy and sometimes comic excitement. To the non Serbian, at least, the language is very well used and executed by composer and ensemble. These often alternate with the closely harmonized chant like modal sections whose many dissonances had purpose and direction, if not resolution. The third compositional element is the Gregorian  like chant which seemed to embody the ritual of which the women are all a part.  Sokolović  ends several scenes with a deft dramatic touch, and the final scene starts with an affecting aria for the Bride which develops into a strong chorale.
The vocal style also recalls to the old traditions of both northern and southern Serbia. The piercing call of the north alternates with the oriental” (the composer’s word in a radio interview)-Byzantine/Arabic trills and warbles of the south. The singing is mostly with little or no vibrato in the ‘early music’ style of Medieval and Renaissance singing. The composer in the same radio interview likens these trills to those of Monteverdi, who she thinks may have taken them from the same source. And perhaps we should look to Monteverdi, who took the newborn Renaissance art form to almost instant maturity and began the Baroque era which saw opera’s first great flowering, to understand its essence.  And its essence is the voice, but not just the voice telling a story, but a unique identifiable voice and character set apart from the mass. The drama and emotions in these voices is what sets opera apart from other musical forms  involving singing. Monteverdi began the emergence of the individual from the collective in music.
But most elements of Svadba-Wedding point in the other direction. The preparations are all in aid of the Bride leaving her friends and individual life to participate in a ritual. And what is a wedding if not a celebration of the survival of the tribe through propagation? As the Bride’s final and only aria seems to suggest, this Bridal Shower Night is an observance of the subsuming of  an individual into the collective. Whether greater or lesser, it is the opposite of the musical form which was born in 17th century Florence in which the individual  is distinct from the mass. In contrast to Orfeo, who tries to bring his wife out of the world of the non-living, Sokolovic’s Bride seems to be leaving the world of the living for an unknown realm. Extraordinarily well crafted and superbly executed by the singers under the direction of Music Director Dáirine Ní Mheadhra and atmospherically staged by director Marie-Josée Chartier along with elegantly simple costumes and lighting by Michael Gianfrancesco and  Kimberly Putell, it is nonetheless more of a secular cantata. A welcome female meditation on one of the central institutions of the species, it lacks the dramatic structure and above all the Voice to be called Opera. Orfeo enters the Underworld, but his triumph is  that he emerges from it. Sokolović’s Bride is travelling the other way.