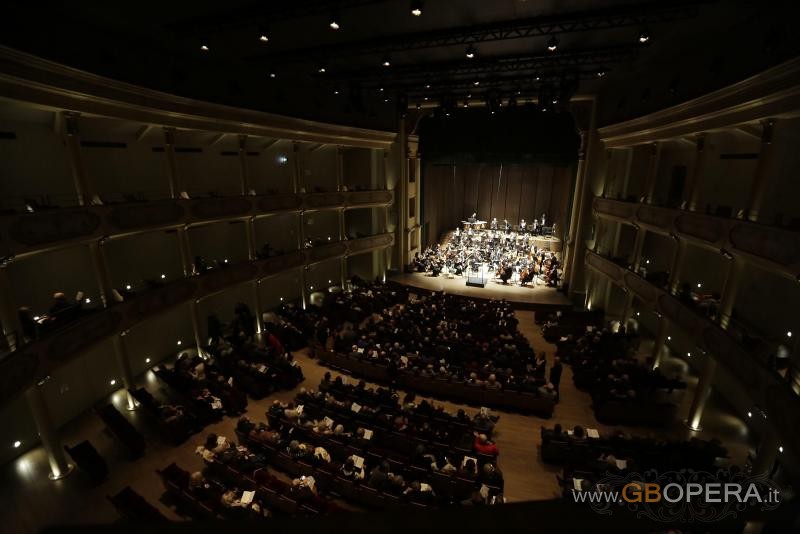 The audience at the second concert of the concert series of the Fondazione Arena di Verona, dedicated to the music of the first Viennese School at the acustically superb, Teatro Ristori, was above all delighted by the performance of young dynamic duo, the violinist Anna Tifu and the violist Daniel Palmizio.  Their individual instrumental mastery combined with distinct but compatible musical personalities, resulted in a rich and vibrant dialogue in Mozart’s Sinfonia Concertante.  With sinuous ease Tifu propelled her performance with a romantic exuberance, against the elegant and more controlled style of Palmizio.  Tifu’s crystalline and sweet tone was complemented by the round and burnished timbre of Palmizio’s viola. Tifu gave generously, expanding her tone into a luscious ringing sound when she descended into the deeper register, providing a strong balance to the viola. The dialectics of the duo was elastic and engaging.   Their phrasing was attentively moulded and their combined cadenzas were eloquent and in  graceful  syntony of degree and intent. With unselfconscious refinement, especially in the more introspective and lyrical moments of the second movement, Palmizio allowed the exquisitely  melancholic colour of  his viola prominence.  The smoothness of their musical line, the phrasing and the dove-tailing of the two parts was offset by a very articulate characterization of the work, unfortunately not shared by the orchestral accompaniment, which  was often sloppy and seemed insensitive to the soloists. The introduction to the second movement was unintelligible, and in general the balance was lop-sided and the phrasing heavy.  The soloists, enthusiastically received, rewarded  the audience with an appealing and well-loved encore, Passacaglia by Halvorsen, based on a theme by Handel, from the last movement of his harpsichord Suite n°7 in G minor, made world famous by artists from Auer and Heifetz to Perlman and Zuckerman.  The duo gave a stunning performance of the virtuoso piece, with its repertoire of effects, nevertheless taking their time to highlight the contrasting lyrical and stately passages, the extrovert and reflective ones or the hushed and eery moments, before launching into the gripping final stretto.
The rest of the concert, was rather disappointing and ordinary. Throughout, the orchestra was  heavy, never managing to attain pianissimo playing. There was little evidence of a continuous musical line, untidy violins, the upper woodwinds were often not together and the intonation was disturbing. Also disturbing was the first trumpet’s very noticeable exit from the stage in the opening Leonore ouverture n°3, only to come back in after the off-stage trumpet call, and circumnavigate the entire orchestra to get back to his place. Almost funny, and very distracting. The three trumpets named in the programme who weren’t playing on stage?  Notwithstanding the energy expenditure and exuberant gesticulation of the conductor Ola Rudner, an habitué of these seasons, the Beethoven Symphony n°2 suffered from many of the same complaints as the first part of the programme, although by the last movement, and in virtue of the movement’s aggregating nature, the orchestra finally found an equilibrium and compactness. Photo Ennevi