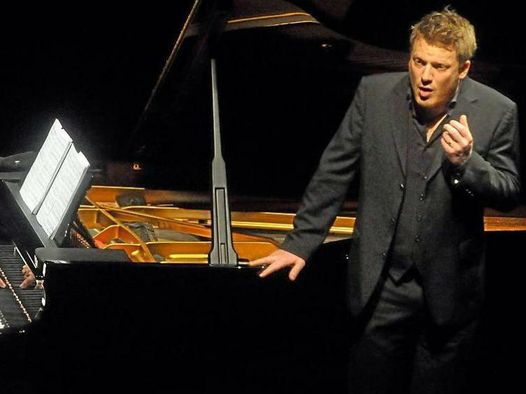 Verona. Teatro Ristori. Verona Amici della Musica Society, 2013/14 Concert Season.
Baritone  Daniel Schmutzhard
Piano Helmut Deutsch
Franz Schubert:“Winterreise” D.911 op.89 to text by Wilhelm Müller
Verona. 21st November, 2013
The perfect evening to reconcile you to life, the week that you’ve had your bag snatched, and a whirlwind has torn off your roof-covering and knocked down the chimney, and as a last straw, you have to brave a winter storm to get to the concert. The audience was rewarded for their resolve. To go to a recital by the baritone Daniel Schmutzhard and Helmut Deutsch is to be comforted in the knowledge that in this culturally, quality quenched world, there are artists not only capable of beautiful playing and singing, but who also who have the depth and power to embody and transmit culture at a profound level.  With consummate  artistry, the two performers conducted the audience through the 24 lied of  Schubert’s final masterpiece,  the song cycle Winterreise,  illuminating each fragment with its most recondite significance and mood.  This last will and testament of Schubert’s, published posthumously, is a musical counterpart to Friedrich’s “Wanderer” paintings.  The desolate symbolic landscapes examine not nature but the artist’s own preoccupations, transforming the experience of nature into a personal exploration, grappling with the inner struggles and resolutions of the human mind. The idea of the Wanderer expressing their own thoughts, while meditating on a journey, became a very popular theme in early nineteenth century poetry and Lieder, and were understood to be an analogy to the journey through life, and a meditation on the human condition. Schubert’s Winterreise, written in the last year of his life when he was very ill and dying, is unarguably the most famous.  This song-cycle, performed as a complete artwork, has a predominantly melancholy, and as it progresses, increasingly bleak, character.  Schubert’s masterful fusion between music and poetry, singer and piano, draws out the emotional situation with extraordinary intensity.
Schmutzhard and Deutsch  gave an exemplary performance maintaining the narrative span and the psychological scope of the one and a quarter hour long duration with mastery: the first half focussing on the anguish of lost love and the second, of the rejection of an outcast from society. They never allowed the tension to lapse, passing from one lied to the next with just enough time for the pianist to turn the page.  Surtitles in German and Italian were provided above a projected backdrop of a faintly discernible bleak winter landscape which discreetly created the setting. The audience was held spellbound by the performers, who never resorted to facile over dramatizations or mannerisms. They delivered with composure and simplicity, highlighting the specific characteristics of each lied with flawless technique and a perfectly balanced dialogue: the symbolic journey towards death, the pilgrimage following a refusal, the entire landscape pervaded by the harshness of winter, the absence of  human life, the foreboding of a crow, the organ-grinder, pessimism, overwhelming solitude , the metaphor for the icy journey into the recesses of his own mind, the Wanderer’s journey, perception ,rejection.
Schmutzhard’s perfect diction, firm vibrant voice, sustained breath control, seamless range and burnished colour were a beautiful basis onto which he moulded the appropriately heart-rending colours and nuances of pathos, and the intensity of  introspection and desperation. Sung by memory and standing almost informally in the curve of the piano,  the directness and purity of his delivery captured and enthralled the audience.  But without wishing in any way to minimize Schmutzhard’s performance, it must be said that Helmut Deutsch was superlative. The piano part is the propelling force of the journey, often setting the mood, the character, the pace and rhythm.  It sets and maintains the scene, underlining the dramatic impact of the texts. Deutsch did all this with the precision of the craftsman and the creativity of the artist.  Each note was perfectly calibrated . The complex piano part rippled, swirled, rustled and limped with unfaltering perfection, transporting the listener into each new tableau, or with quietness and depth underlining the calm and darkness of the long, slow vocal lines.  Cup bearers of a great tradition, they gave a beautifully polished and memorable performance which evoked the aura of an authentic Schubertiade. Foto Brenzoni