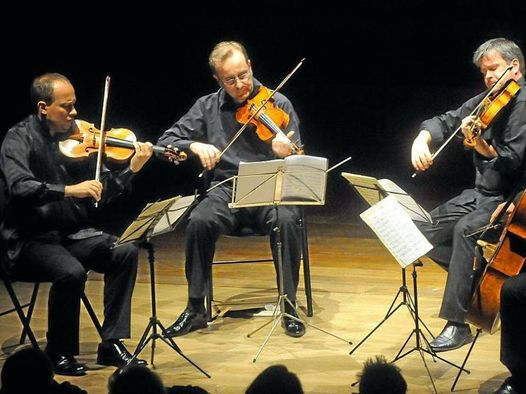 The Veronese chamber music society, Amici della Musica,  recently hosted a concert by the Quartetto d’archi della Scala in the third concert of their 104th season. The first half of the  programme was devoted to a repertoire not heard frequently in string quartet concerts; the elegy,  Crisantemi, by Puccini, and Verdi’s only string quartet.  It was a fine coupling to collocate together, the  works of two operatic composers who were venturing into a musical language which was uncommon to both of them.  The quartet launched into Crisantemi with gusto, in a very straightforward rendition of this piece, dedicated to the memory of Amedeo of Savoy, Duke of Aosta. The themes, laden with pathos, are those of Puccini’s opera Manon Lescaut.  Rather than linger over the elasticity of the ‘rubati’ or the interiority of the searing, heart-rendering harmonies, the group privileged a forward moving, passionate thrust, with the counter voices given their just relief.  The Verdi String Quartet in E minor, written in 1873, during a period  forced inactivity in Naples while waiting for a production of Aida, is a delightful work, which  reveals melodic charm and technical skill in the instrumental writing. It has the four classical movements and is characterized by a formal unity and rigour mated to the hues of operatic taste. There are rather strong overtones of Amneris in the first movement, and the final fugue in the last movement anticipates Falstaff.  From the beginning of the first movement, the writing is rich in Verdian operatic devices; the urgent, syncopated rhythms, and plucked accompaniments, the long solo instrumental line, imitating a vocal line, and cascading, descending, unison scales.  The quartet presented it with vigour, although at times there appeared to be a lack of agreement on balance and phrasing, in particular with the second violin often overwhelming the first.  In this first half of the programme, the four players  gave the impression of playing independently, with little apparent contact between them.
This changed in the second half of the concert, where the interplay between the quartet members in Webern’s luscious, post-romantic, Langsamer Satz, exhalted the long taut chromatic lines, the counter melodies emerging from the dense musical weave, the sudden drops to pianissimo, the rolling  waves of sound and the overall complexities of the rich and expressive score. The perfect prelude to the administration of the tension of the sonorities of which the  mighty Great Fugue 0p.133 by Beethoven is formed. However in the more energetic sections the articulation,was not always decipherable. The quartet was applauded enthusiastically by the audience and after repeated curtain calls, conceded two encores which were briefly and charmingly presented by the cellist.  The first, Contrapunctus 1, from J.S. Bach’s The Art of the Fugue, was movingly played with great simplicity. The second, a transcription for quartet of the aria Caro Nome, from Rigoletto, as an ulterior tribute to Verdi in his bicenntenial year, was performed  with grace and levity, and an innate sensibility to this repertoire which betrayed their appurtenance as principal players of the La Scala orchestra. Photo Brenzoni