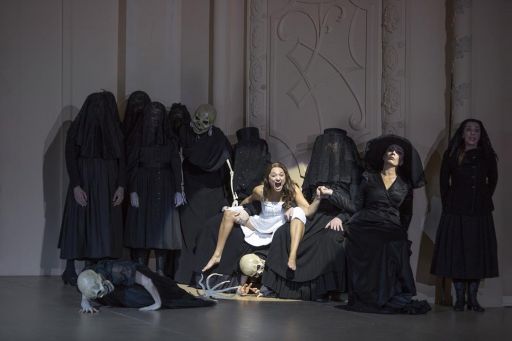 The Czech composer Antonin Dvorak is internationally well-known for his 9th symphony (“From the New World”), the Cello Concerto in B minor, and the Slavonic Dances. Rusalka has become his most popular opera outside Bohemia, at his time part of the Austrian Empire, now the Czech Republic. There has been a staging tradition of Rusalka in Germany since the 1930s. Opera director Barrie Kosky’s production at Berlin’s Komische Oper follows the plot and adds a new approach. He says: “Rusalka is Tchechov with music” referring to the basic melancholy of the Dvorak’s Slavonic music added by popular folk song elements. Klaus Grünberg reduces the scenary to the front stage with a white room that extends the auditorium with a door opening up for the singers and the chorus to appear. Thus the spectator has enough space to imagine the fairy tale in his own way. Barrie Kosky drops the traditional elements of the fairy tale and concentrates on Rusalka’s world of feelings and her eager desire to become a woman by leaving her fish-like body. That becomes especially evident with the pantomime in the 3rd act. Black ghosts from the realm of death precipitate Rusalka’s end. She seems between life and death after her experience with human beings.
Rusalka is a water sprite who wants to become a human being for her love for a prince who regularly visits her lake. After the Water goblin has warned her of leaving the realm of ghosts, sprites, and goblins, a witch helps her turn into a human being while extracting a huge fish bone from her body and cutting her fish tail off. Fairy tales are cruel as well. As a human being she is dumb and will not be able to talk to her beloved prince who soon turns to a foreign princess who attends a ball at his palace. His repentance is of no use and he has to die after kissing Rusalka for the last time. She will disappear in her lake forever putting a fishhook in her mouth while the prince is holding the fishing pole between his legs, crouching in his tails. Rusalka is both bait and victim. It is the final climax of the evening with one of the most beautiful and touching opera finales ever: solemn music of a funeral march along with desperate singing about love and death, parallels to Wagner’s Tristan (Liebestod) or Debussy’s “Pelléas”.
Asmik Grigorian’s soprano has “corpo” in the title-role and sounds tragic right from the beginning. Her interesting timbre and dynamic singing predestine her for the Slavonic repertoire. The dramatic moments are well prepared and her singing and acting form a wonderful portayal. The highly dramatic passages towards the end fell a little short, perhaps a problem of breath control and condition as her acting is extraordinary. The best-known part of the opera, Rusalka’s “Song to the Moon” (“Měsíčku na nebi hlubokém”) from Act 1, is part of the action and not a single aria but sung superbly reflecting her strong desire to become a woman. The Welsh tenor Timothy Richards sings the Prince with italianità and lots of intensity making the top notes special moments but always embedded in the vocal line. His breath control is amazing for a wonderful legato. Jens Larsen uses his profound bass for the Water goblin, partly a ghost, partly Rusalka’s father. His arioso in the 2nd act is most touching. In the 3rd act he sings from the 2nd tier only, which is less effectful. Agnes Zwierko has a real contralto with deep and dark notes for the witch Jezibaba who shows up with a black cat reminding us of witches from Shakespeare to Wizard of the Oz in a Guard of honour. The pipe-smoking Foreign princess with a Turandot-like look is sung by Ursula Hesse von den Steinen with dramatic attitude and she makes most out of the relatively short role. Peter Renz and Christiane Oertel as Gamekeeper and Turnspit, respectively prove that there are no minor roles in a Komische Oper production. They are part of the production and give comical vocal and scenic portrayals. The three elfs are sung nicely and homogenously by Mirka Wagner, Annelie Sophie Müller, and Katarina Morfa. Henrik Nánási conducts the Orchestra of the Komische Oper in a highly concentrated way with some piercing sound at the beginning. His conducting is fast following the rhythmic passages that remind us of Dvorak’s Slavonic Dances. Like that he tends to give the orchestra a little too much sound over the singers. The more lyrical passages do not lack musical poetry and are basically supported by the harp. Yet he develops the full musical power towards the end of the opera.
The production has been in Komische Oper’s repertoire since February 2011 now and will have its place there for a long time. According to Komische Oper’s tradition it is sung in German.