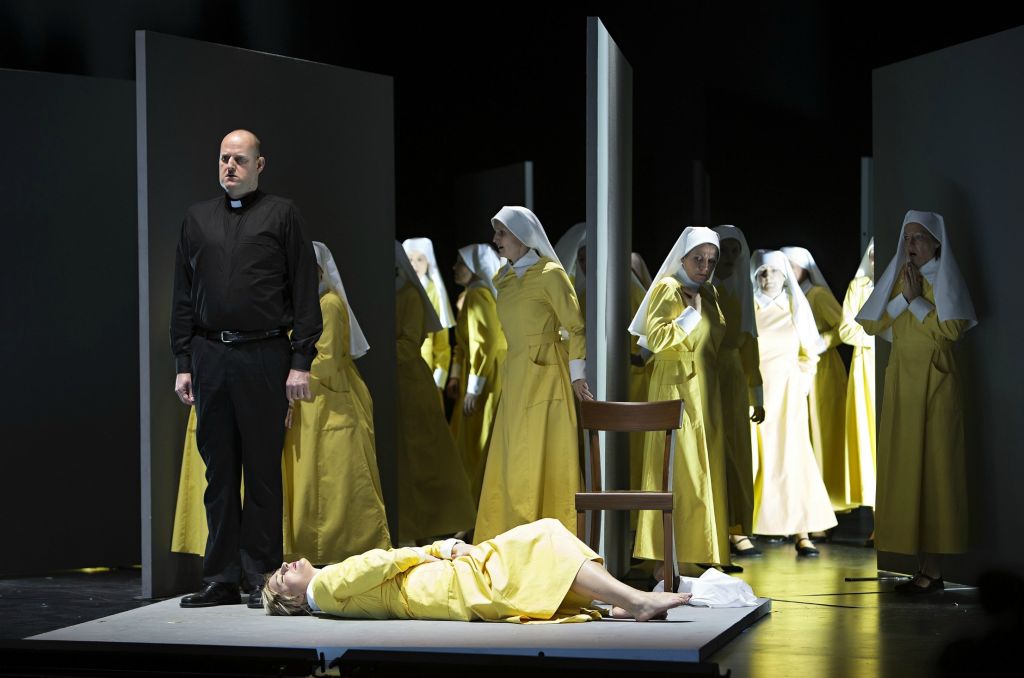 “The fiery angel” is one of the highlights of the Prokofiev Week at Berlin’s Komische Oper. Benedict Andrews’ production of the masterpiece is the first new one in Berlin after 40 years and unlike the tradition of the opera house, it is not sung in German but the Russian original language.  The composer’s relatively unknown opera is staged in a breath-taking way. As the plot can be considered timeless, it is not specifically set in the Middle Ages and even everyday props such as TV-sets, metal dust bins etc do not give you the idea of a modernized drama. The haunting story of the demon possessed Renata and her unhappy lover Ruprecht is universal and could very well be used for the script of a prime-time crime or psycho thriller in our modern over-individualized society where psychological malfunctions and diseases are gaining ground such as burnout, obsessions, and paranoia.
The production is concentrated on the relationship between Renata and Ruprecht and their characters are multiplied by male and female extras of the same look. They are present most of the time to change the stage which is on the minimal side but never leaves any doubt about the whereabouts of each scene. Altogether it is a good example again for how effectively you can get most out of the scenery by simple means, which is a feature of most Komische Oper productions. The multiplied Renatas and Ruprechts put together or dismantle plain grey wall and floor parts on the revolving stage and add some distinct props to create the different locations where the action takes place: hotel rooms, studies, Count Heinrich’s living room with an open fireplace, finally the convent with the cells of the aesthetically yellow-clad nuns in the final scene. Victoria Behr’s bright costumes (pink and yellow dresses, a blue sequin dinner-jacket for Agrippa von Nettesheim) nicely contrast with the generally gloomy stage of Johannes Schütz, lighting by Diego Leetz. Renata’s character is also multiplied by several Renatas of the same look at several ages illustrating her life story from childhood to present during the narration in the 1st act. Little Renatas accompany her during the performance like the haunting ghosts her soul to finally cut her hair off and mock at her when she enters the convent. The fiery angel Madiel also appears in this production as a priest representing both Count Heinrich and the Inquisitor at the end. Not even Madiel’s wings are missing and the petrol can that he brings along when he appears for the first time in anticipation of Renata’s end at the stake. In this production she is emancipated enough to commit suicide by pouring the petrol over herself to go up in flames. Renata is partly wearing a pink Lolita dress alluding to some sexual abuse during her childhood which might explain her psychological condition. Ruprecht looks like a successful businessman at the beginning who is gradually turning into an outsider the more he falls in love with Renata and gets involved in her obsessions until he gets heavily wounded in the duel with Heinrich. The setting of a cheap hotel in the opening scene and even more the appearance of landlady and fortune-teller give you the idea of a brothel where Renata is working and Ruprecht may be a client. This approach makes sense with the last scene of the opera: from brothel to convent even though it would simplify the plot and precipitately lead to Renata’s condemnation as really done by the Inquisitor after all.
Benedict Andrews’ debut at the Komische Oper was highly supported by the orchestra of the opera house whose musical director Henrik Nánási developed a wonderful sound of Prokofiev’s futuristic music, sometimes with some domination over the singers. Thus the interludes became orchestral highlights. No wonder as Prokofiev used parts of the opera for his 3rd symphony. The experienced Russian soprano Svetlana Sozdateleva who had sung the role of Renata before at the Théatre royal de la Monnaie in Brussels, gave a great two hour tour-de-force (the opera is played without any interval). She sang with lasting stamina almost making forget the uncomfortable tessitura. Her acting went perfectly well with her intense singing even though she seemed to be a little too controlled sometimes, perhaps a result of the opening night stage fright. The Azerbaidshan baritone Evez Abdulla was a vocal match for her. His convincing macho Ruprecht at the beginning gets dismantled the more he gets under Renata’s influence but he throws himself heroically into the duel with Count Heinrich. Jens Larsen sang an authoritative Inquisitor but his acting as Angel Madiel and Heinrich was somehow self-conscious. Dmitry Golovnin was a highly convincing Mephistopheles with his strong tenor to dominate the scene at the tavern and he also excelled in the short role of Agrippa von Nettesheim. Xenia Vyaznikova sang both the fortune-teller at the beginning and Mother Superior at the end beautifully with her lush and impressive contralto. Alexey Antonov as Faust completed the idiomatic cast in a wonderful way. All the other singers, the chorus, and the extras contributed strongly to the success of the performance. There was partly frenetic applause for the singers and the production team at the end. Photo Iko Freese /drama-berlin.de