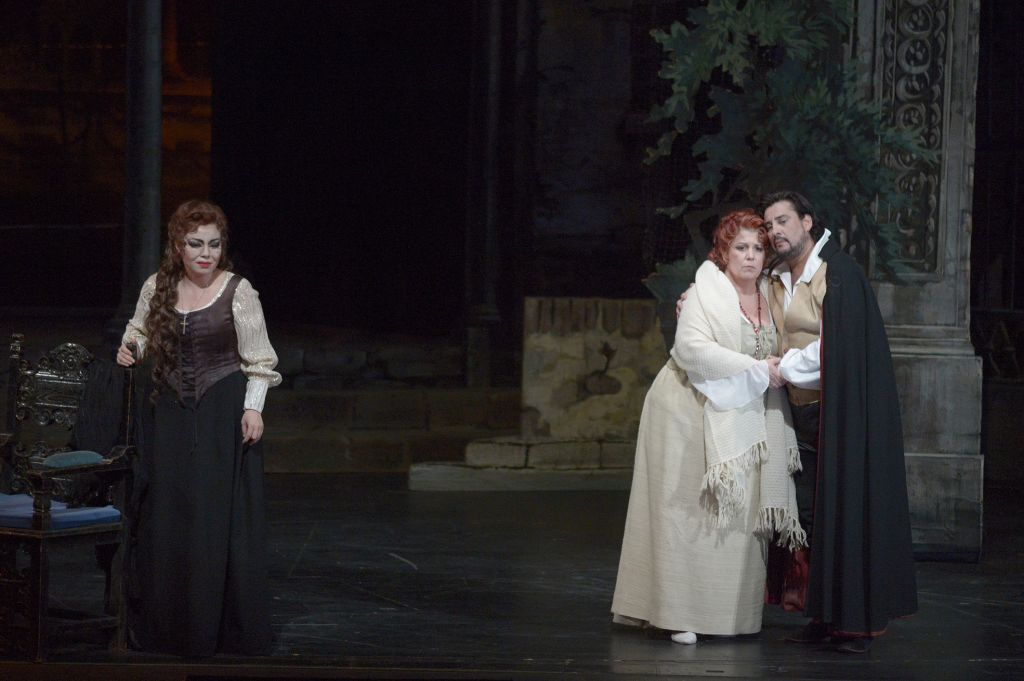 The production of “La Gioconda” at Deutsche Oper Berlin is 40 years old but still a box-office hit. So it was once a good idea of the producer to choose original decorations from the time when the opera was composed and staged for the first time. Along with a traditional production, it is timeless and has attracted generations of opera-goers in Berlin. Of course Amilcare Ponchielli’s masterpiece, a late case of a Grand-Opera with great chorus scenes and a ballet, is a musical gem and has a fixed place in the Italian repertoire. The Deutsche Oper Berlin justifies itself to be one of the leading opera houses world-wide with a cast that is a who is who of present-day opera life, a powerful chorus, very good ballet soloists, and an excellent orchestra. The all-the-time sumptuously decorated stage (Scenografia Camillo Parravicini, Roma) carries you back to Venice in the 17th century. The sight of each decoration when the curtain rises is so fabulous that it makes up for the three long intervals necessary to change the stage. Filippo Sanjust’s production and costumes give you an idea of what opera used to be like before the era of the Musiktheater, above all if it comes to a Grand-Opera like La Gioconda. It is like a fancy-dress party in a historical setting and leaves the deep impression of something beautiful. That is the objective of art in general, music and opera in particular. That does not necessarily mean that a Personenregie is missing. All the action becomes quite clear: Gioconda’s passion for Enzo who still loves Laura, the spy Barnabá’s intrigues between his passion for Gioconda and loyalty towards the Inquisition embodied by Laura’s husband Alvise. The scenes of the 1st act turn out especially touching when Gioconda is looking after her blind mother and defending her in front of the threatening Inquisition. The mass scenes of the chorus of the Deutsche Oper (Chorus Master William Spaulding) in the 1st and 2nd acts are similarly impressive and prove the quality and professionalism of its members. A highlight of the evening is undoubtedly the ballet in the ball scene of the 3rd act. The famous Danza delle ore (Dance of the Hours) is staged as a copy of the plot (choreography by Gudrun Leben): Alvise and Enzo are both courting Laura’s favour. The pas de trois is brilliantly danced by Anna Lieceica who also excels in her fouettés, Gauthier Dedieu, and Miguel Angel Collado Sanchez. They are supported by the wonderful Corps de ballet. Jesús López Cobos, general music director of the Deutsche Oper in the 1980s returns to the opera house very successfully. The prelude still has some Wagner speed but as soon as the curtain rises and it comes to the joyful mass scenes of the 1st act he makes the orchestra of the Deutsche Oper play Italian opera at its level best for the rest of the evening. Whatever you can see and hear on stage – Italian opera of the 19th century – is reflected by the pit. López Cobos gives the orchestra room where suitable and the final scenes of each act turn into real highlights but at the same time, he makes the orchestra accompany the singers in a wonderfully traditional way which has unfortunately become out-dated nowadays when singers are often drowned by the orchestra. Speaking of the singers, Italian opera is singing and you get the idea that the cast have joined for the time trip to the 19th century. Marcelo Álvarez is a virile Enzo and he has got what it takes to be an Italian tenor with striking top notes. His “Cielo e mar” was romantic and effective at the same time. Lado Ataneli does not take second place to him and uses his powerful baritone to bring the lousy spy Barnabá to life. Ante Jerkunica’s sonorous bass is 1st class for Alvise and his solo scene at the beginning of the 3rd act left a deep impression. His wife Laura is sung by Marianne Cornetti whose voice reminds me of Fiorenza Cossotto. It is round and sumptuous but her top notes fall sometimes short. Dana Beth Miller has a real contralto and convinced as Mrs Quickly recently. Her voice fits ideally to La Cieca and her “Voce di donna” was one of the highlights of the 1st act. Hui He had a great success in the primadonna title role but also the burden of her fabulous predecessors such as Arangi-Lombardi, Callas, Cerquetti, La Rysanek who sang on the opening night of this production on 1st March 1974 or Scotto. Her “Come t’amo” was ethereally piano but whoever heard key passages such as “O madre mia” or “Essa fugge ed io qui resto” in the 2nd act with her did not really hear them. The German surtitles were partly good to retranslate them into Italian to have an idea what she was singing in fact. Yet her Suicidio did not fail in its very effect. Altogether it was a glorious night of Italian opera as it is and the audience appreciated it frenetically. Photo © Bernd Uhlig – Bettina Stöß