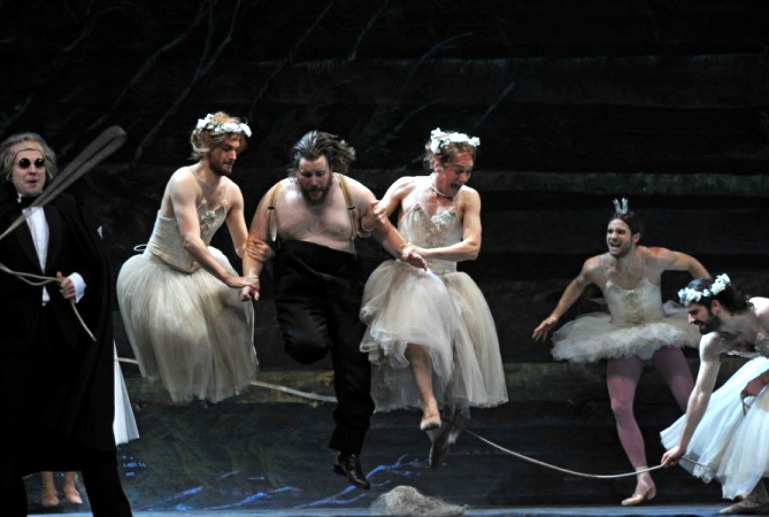 The Falstaff production of Deutsche Oper Berlin with its opening night on 17th November 2013 is one of the Opera house’s contribution to the Verdi year 2013. Producer Christof Loy‘s idea to set the action in an old people’s home is not new. Damiano Michieletto did the same in his production of Falstaff at the Salzburg Festival last summer. The idea may not be far-fetched as Giuseppe Verdi composed Falstaff as his last opera at the age of 80 when he also founded the Casa di Riposo for musicians.
The performance starts with a black-and-white documentary about the supposed Casa Verdi in the manner of a silent film. An old singer rehearses “Quand’ero paggio” sung by Victor Maurel, Verdi’s first Jago and Falstaff. When the curtain rises, we will hear the same song sung by the old Falstaff who we recognize from the short film. All characters but Nannetta and Fenton are elderly people who turn into younger ones during the performance. A play in the play starts. There is a constant changing clothes on stage and Falstaff even gets rid of his big paunch. He is also allowed to put a traditional Falstaff costume on at the end of the scene with the dressed-up Ford who is turned into a kind of cartoon character. At the end of the opera the characters return to the old people’s home by putting their costumes as elderly people on again. There is much slapstick going on with a few nice ideas of the producer which do not really impair the plot. The singers act ambitiously and fit into the producer’s intention of a good Personenregie. The scene is reduced to curtains, Falstaff’s bed, bookshelves, a portable door etc.
The orchestra undoubtedly plays the musical major role of the opera. The score is one of the most subtle and differentiated of the 19th century based on Rossini’s brio rather than Wagner’s broad sound even though Falstaff was composed ten years after the death of Verdi’s German contemporary. Little wonder that Donald Runnicles has difficulty in conveying the transparency of the score and holding the ensembles together. He is at his best towards the end of the opera. The singers are sometimes drowned by the orchestral sound which is partly clumsy and heavy.
The title role is a showpiece for an experienced singer with full vocal skills but Noel Bouley is not. One must take into consideration that he replaced the originally cast singer who had fallen ill but an opera house like the Deutsche Oper should be able to find an appropriate replacement. It is funny to hear in the first scene that Marko Mimica as Pistola has a much more powerful voice. Michael Nagy sang a very good Ford but some brilliance was missing at the end of the jealousy monologue. Joel Prieto has a light tenor for Fenton and sounds a little inhibited when it comes to the great romantic moments. The reliable Burkhard Ulrich is a trenchant Doctor Cajus. Gideon Poppe as Bardolfo and Marko Mimica as Pistola are lively in both singing and acting. Dana Beth Miller as Mrs Quickly stands out of the female quartet with wonderful deep notes for “Reverenza” and a homogeneously round voice. Jana Kurucová uses her sympathetic light mezzo for the little grateful role of Meg Page. Barbara Haveman as Alice Ford makes forget that she is to lead the female quartet musically. Her soprano is not really charming, has no Verdi melos, and tends to shrillness. In the role of Nannetta, Elena Tsallagova cannot hide the Slavonic origin of her soprano and the expected ethereal piani often turned out shrill and sharp. The chorus shared the functions of chorus and ballet professionally. Photo Falstaff © 2013, Hans Jörg Michel