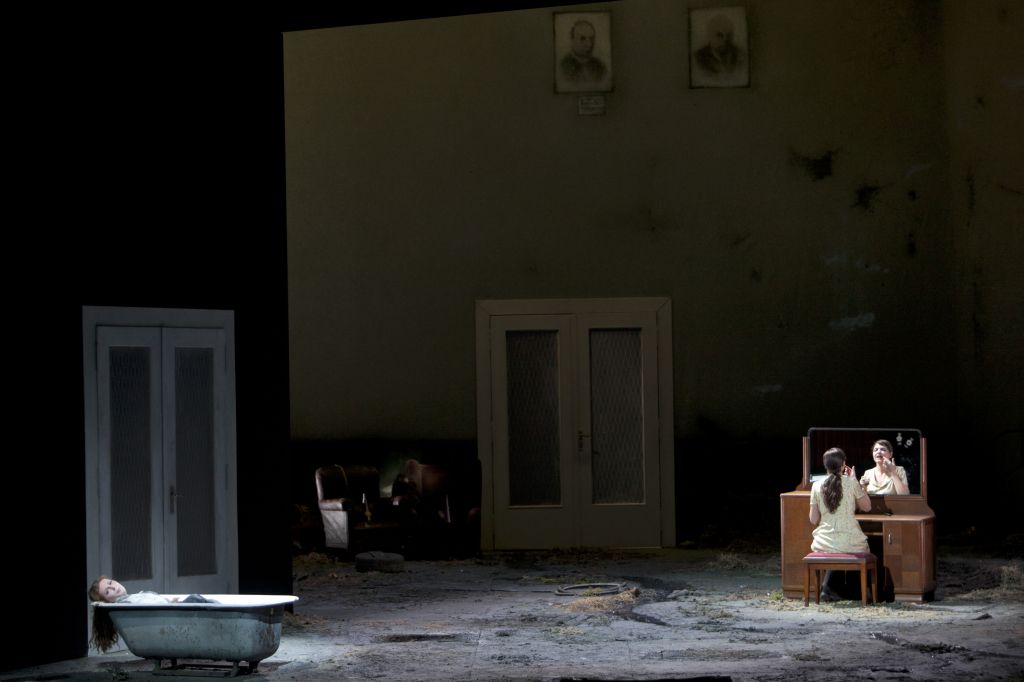 The chief conductor of the Berlin Philharmonic Sir Simon Rattle turns to opera once or twice a year, usually with the Staatskapelle Berlin at the Deutsche Staatsoper. After his successful conducting of From the House of the Dead by Janacek there a couple of years ago, he returns with the composer’s Katja Kabanova in Andrea Breth’s production taken over from the Théatre de la Monnaie in Brussels. It is another example for whatever the director’s approach to the plot is, the music of a masterpiece can hardly be affected or even destroyed. So whatever could be heard from the orchestra pit during the evening, it was Janacek in an enriched and dense form rather than a detailed presentation of the score in all its harshness, inevitability, and at the same time Slavonic beauty. Despite the orchestra’s fame the evening started with some intonation problems in the orchestra pit, perhaps an opening night phenomenon but Rattle kept everything together for an overall solid and compelling musical experience. It has little to do with the plastic and detailed interpretation of Rattle’s compatriot Sir Charles Mackerras who once analyzed Janacek’s operas thoroughly for the highly-appreciated Decca recordings to put all the details together like a wonderful mosaic thus creating a model of Janacek’s typical and specific musical language. But there we go: two different conductors of an undoubted top level, two different interpretations. The orchestral parts of the score, the prelude and the interludes are turned into musical highlights by Rattle and he also accompanies the singers deliberately to pave the way for the specific Janacek sound with the underlying Czech language.
Whatever happens on stage within 100 minutes without any interval seems to differ from the music and yet orchestra pit and stage form a sometimes unintentional unit. Whatever Andrea Breth’s approach to the plot offers, it is definitely no hope. All seems determined, finished, even condemned before any character can start to act for or against his fate, the least Katja herself whose breaking out of her unhappy marriage to mummy’s boy Tichon is a desperate attempt rather than a solution. The scenery by Annette Murschetz is more than confined atmosphere of a small Russian town. The unified stage consists of two grey walls with a glass door each, sometimes completed by a third wall. It looks like a run-down apartment with a bath tub, fridge, sometimes a table, an oil radiator etc. In this banal setting of today’s time, there is no space for the Volga river that dominates the play in fact. There is a rivulet instead running diagonally across the stage. Glasha (Emma Sarkisyan, once Felsenstein’s celebrated Carmen and with a highly impressive stage-presence) is washing some linen in it in the opening scene and Kudrjash later carries a plastic bag full of water and gold fish to give an idea of the actually omnipresent Volga in the score. The costumes by Silke Willrett and Marc Weeger underline the gloomy stage and turn Katja into an unattractive woman with a dull grey cardigan. We find her in a fridge at the beginning and towards the end of the opera with its door closed by Kabanicha. Katja recalls her childhood at the beginning lying in the same bath tub where she finally cuts her veins to commit suicide. That anticipates her end before the love affair with Boris really gets going. Boris appears as a spick-and-span business man ordered about by his uncle Dikoj and he can little do to prevent Katja’s end. The servants wear dresses of orthodox nuns that give you the idea of a closed society reigned by Katja’s mother-in-law Kabanicha who embodies the moral standards of her dictatorship over all people who have to do with the Kabanov family. She washes her son’s private parts and buries a baby later but she also indulges in some “forbidden” games when it comes to an explicit love scene with Dikoj on the family table. The nice idea of pouring rain at the beginning of the 2nd act for the family dinner of Kabanicha, Katja, and the servants makes little effect on the already oppressive scenery. In the last act, the burning fires of the cave scene are replaced by candles on metal barrels giving the idea of an orthodox church and suggesting that Katja’s death was calculated right from the beginning. Altogether Andrea Breth sets up lots of pictures that go with the story but there is no development of the characters.   Eva-Maria Westbroek in the title role is most affected by that approach. Without doubt she is an aspiring singer who can do the part of Katja but whenever it came to the key passages there was no poetry or radiance in her singing. Pavel Černoch is not only highly idiomatic but also masters the demanding role of Boris vocally. Deborah Polaski has meanwhile turned to roles of the Charakterfach which is a plus for her Kabanicha. Her once dramatic soprano still offers compelling notes. Stefan Rügamer delivers a character study as Tichon suppressed by his mother, dominant towards his wife. Pavlo Hunka sings a competent Dikoj. Florian Hoffmann as Kudrjash with a suitably light tenor and secure top notes and the pretty Anna Lapkovskaja as Varvara with her beautiful mezzo are equally committed to their roles. The Staatsopernchor (Chorus Master Frank Flade) was up to its high standard. Sir Simon Rattle was unambiguously acclaimed by the audience as was the production team around Andrea Breth. Photo Bernd Uhlig