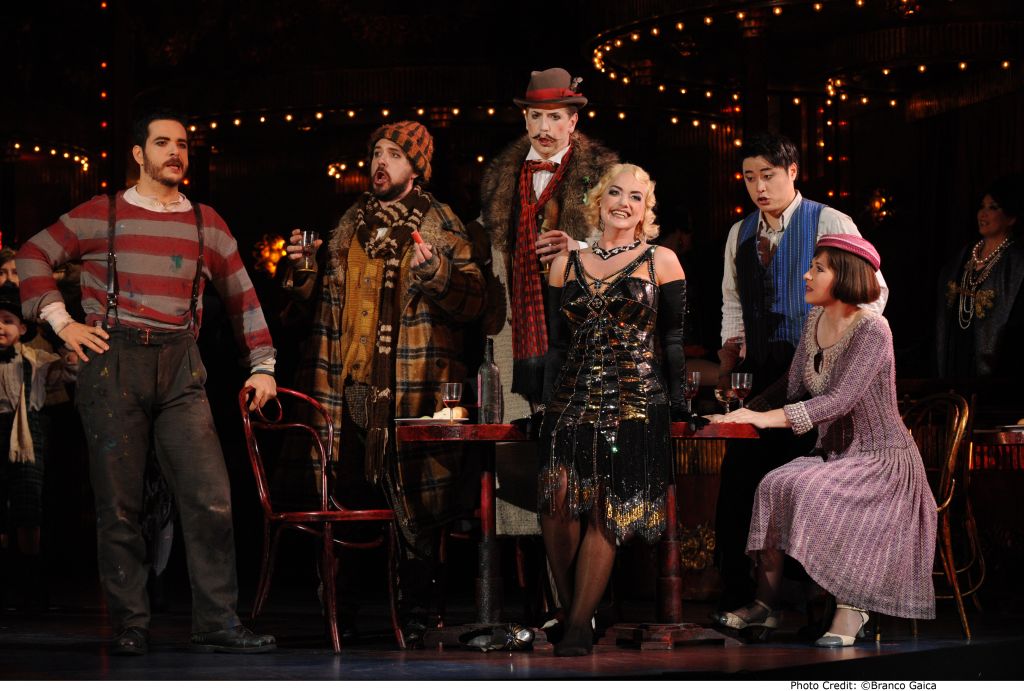 Opera Australia chose the revival of the Gale Edwards/Brian Thompson 2011 production of  ‘La Bohème’ to herald in the operatic New Year at the Sydney Opera House. Although one of the best-loved and most popular operas of the repertoire, the tale of poverty, cold and death, didn’t seem a particularly appropriate thematic choice as the operatic icon within the summer holiday and harbour fireworks atmosphere which is the trademark of  the Sydney New Year.  The, by now, well run-in production’s most striking aspect, was the director’s decision to locate the story in the Weimar Republic Berlin of the late 1920’s instead of the original location in 1830’s Paris.  Although parallels can be drawn, the transposition causes problems, especially in the second act.  Edward’s vision was  seconded by Brian Thompson’s inventive set and Julie Lynch’s effective costumes.   The Spiegeltent structure which took up the entire, rather small Sydney Opera Theatre stage, remained a fixture throughout, and lent itself discreetly to a tall garret in the outer acts and to a wired check-point in the third.  It came into its own in the second act where it was filled with balconies, furnishings and flashing lights to resemble its original function. But the staging of this act proved the most unsatisfactory in regards to the authentic spirit of the opera. Notwithstanding some masterful touches, the clever employment of  a central rotating stage so that the clients’ tables  passed around Musetta, allowing her to sing directly to the audience without turning her back to them, (creating at the same time the movement and dynamics necessary to the scene), and the obvious Musetta/ Marlene Dietrich at the mike citation (who it seems actually performed in a Spiegeltent), overall, there were some awkward inconsistencies. If the general opera going public can turn a blind eye in the first act  to the incongruous references to Paris(Quartier Latino, comingnoli di Parigi, La Banca di Francia) and put it down to a touch of nostalgia from Parisian expatriates, it would seem, however, unlikely that the expats would be paying homage to Luigi Filippo (m’inchino a mio Re!) a hundred years down the track.  And in the third act, “quelli di Gentilly” are a bit far from home at the customs/check-point in Berlin.  However the second act poses the greatest problems. However seedy Paris was in the 1830’s,  the overarching atmosphere in Café Momus is gay, noisy and carefree, where the bohemians are testing liberation promised by post-revolutionary society.  It acts as a foil to the underlying, already glimpsed, dramatic and tragic events to follow. In this production, Café Momus has the distinct connotations of a brothel complete with the domineering presence of a nazi in full-uniform, surveying the proceedings.  It lends a sinister and ominous air which is at odds with the libretto, the music and the  original setting as described by Puccini in the score. This leads to an ulterior suspension of belief.  What are a gaggle of children contending the toys of the popular itinerant toy stall of Parpignol doing in a brothel? The children’s chorus, however, shone for musical precision, beautiful, individual voice quality and fine ensemble singing.  The same can be said of the milkmaids and peasants from the women’s chorus at the beginning of Act 3, whose firm voices and clear diction gave their small role particular presence.  The soloists all performed with commitment and intensity.  Sharon Prero, as Musetta, was pertinently brassy in this Jean Harlow-like context, although not as convincing in the declamatory part in the last act.  Strangely, for the only Italian of the cast, the diction of Giorgio Caoduro, as  a virile Marcello,  resulted woolly even though he sang and acted with ease.  Ji-Min Park, as an ebullient Rodolfo,  gave his all from start to finish.  In fact, too much so.  He boomed the beginning of Che Gelida Manina into Mimì’s ear, and although even and flexible over the entire range and  strong in the high register, the voice, lacking in colour and dynamic changes, came over as one-dimensional.  Nicole Car‘s Mimì was portrayed as rather coy and as the opera progressed, almost ethereal and detached figure. A technically even voice with a full and round quality, a fast vibrato nevertheless gave a continuous tremulous effect.  Unfortunate to leave the couple on stage singing at full volume at the end of act one, instead of having them off-stage and attenuating the sound into the distance as requested in the score.  As with Park, little contrast, so important in this musically fragmentary opera, was given to the timbre and colour of individual phrases and words, resulting in a vocally uniform performance in the first three acts.  The very nature of the last act allowed her, however, to demonstrate her interpretative qualities and capacity to sing firm and controlled sustained pianissimi, which she did with pathos.  Shane Lawrence made a brilliant and theatrical Schaunard, and Richard Anderson was a convincing Colline, natural in his delivery and  moving in the simplicity and directness of his Vecchia Zimarra.  Graeme McFarlane was a convincing Benoit, and Tom Hamilton, a thankfully unmannered Alcindoro.  Benjamin Rasheed as Parpignol, Clifford Pumpton and Malcolm Ede respectively as Customs Officer and Sergeant, completed the cast.   An authoratitive conductor, Andrea Licata elicited clean, fine and attentive playing from the orchestra, with beautifully warm solo string parts.   Highlighting a stronger characterization from each woodwind instrument, would have conveyed, however, a more defined musical sketch.  He was in caring and constant syntony with the singers, never abandoning them for a moment. His rather comfortable chosen tempi, could have been  more elastic overall, and if  taken at a tighter speed at the beginning and end of the second act, would have given that scene more life and sparkle.  The performance was enthusiastically received by the audience, who in the exceptional setting of the foyer, overlooking the breathtaking spectacle of  the harbour, exchanged appreciative comments and compliments during the intervals. Photo credit Branco Gaica.