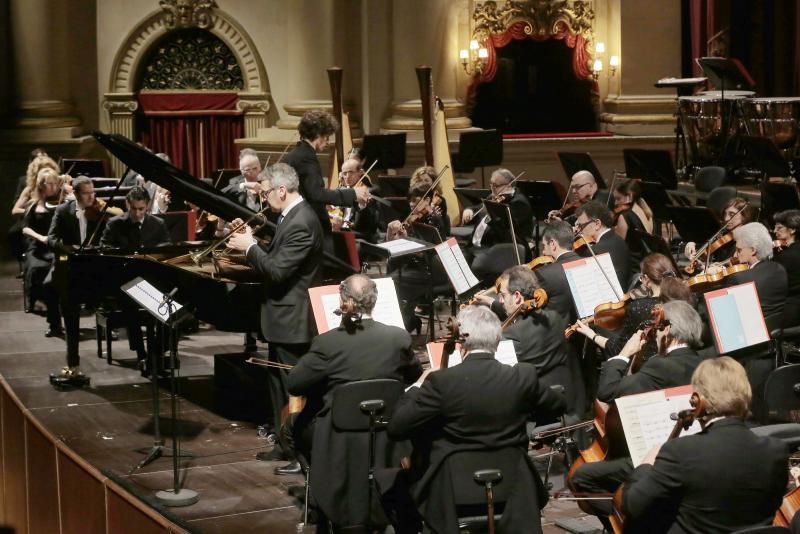 Verona. Teatro Filarmonico. Arena di Verona Concert Season 2013-14
Arena di Verona Orchestra
Conductor  Nicolaus Kraus
Piano   Roberto Cominati
Trumpet   Massimo Longhi
Dimitrj Shoshtakovich: Concerto for piano and trumpet  n.1 op.35
Maurice Ravel: Piano Concerto for the Left Hand in D major
Béla Bartók: Concerto for Orchestra
Verona. 7th February, 2014.
The 4th orchestral concert in the  Arena di Verona’s winter series was dedicated completely to music composed in  the first half of the 20th century.  An interesting juxtaposition of three uncustomary examples of the same genre, the concerto, the first two written almost in and around the same time, 1933, and the third example ten years later.  All three works have characteristics which make them particularly unique. The first, Shoshtakovich’s concerto for piano and trumpet, utilizes only a string orchestra and solo trumpet to accompany the piano soloist in an experimental neo-baroque combination of instruments.  In fact the real name of the concerto, Concerto for piano accompanied by string orchestra and trumpet, gives a truer picture of the form, given that the piano and trumpet are not given equal prominence. Only in the last movement after the piano cadenza, does the trumpet, in this occasion played by a principal trumpet from the Arena Orchestra, Massimo Longhi, assume a relatively equal role. The poise, elegance and refinement of the pianist, Roberto Cominati, brought out the sophistication of this very distinctive work, in which Shoshtakovich succeeded in moulding a polyglot collection of quotations and influences: the parody of the “Appassionata” at the beginning, the sarcasm of an Austrian folk song, other quotes and references, from Beethoven, Haydn, popular folk music, to Shoshtakovitch’s own compositions.
In the second work, Ravel’s Piano Concerto for Left Hand,  which was written for Paul Wittgenstein, Ludwig’s brother, who had lost his arm in the First World War, Cominati gave a powerful and commanding performance.  He explored the full sound and texture of the solo part with determination and drama, drawing out weighty rich and ringing sonorities which together with the exquisite orchestral scoring gives the piece its heroic grandeur.  He interpreted the  dreamy, delicate interventions with refinement and tenderness, and  without self-indulgence. His restrained and rarefied rendition of the encore, Clair de Lune by Debussy, was fluid,  restrained and simply delivered, lingering even after he left the stage.
The second part of the programme was devoted to Bartok’s Concerto for Orchestra. Rich in  characteristic Bartok elements, rhythmic asymmetry of his melodies, repeated ostinati, accelerandi, fugues, contrappunto, Hungarian folk music inspired motives, every instrument or section is treated as a soloist, with many opportunities for virtuoso playing.  There remains, nevertheless a rigorous architectural shape, within which the eclectic style of Bartok finds intense expression.  The conductor Nicolas Kraus led the orchestra with energy and enthusiasm  in the virtuoso and frenzied sections, and with care and suppleness in the contrasting melancholic or lyrical.  Even though not all the string sections responded compactly, and the general ensemble at times seemed almost uncertain, the overall performance was vibrant and compelling. Photo Ennevi