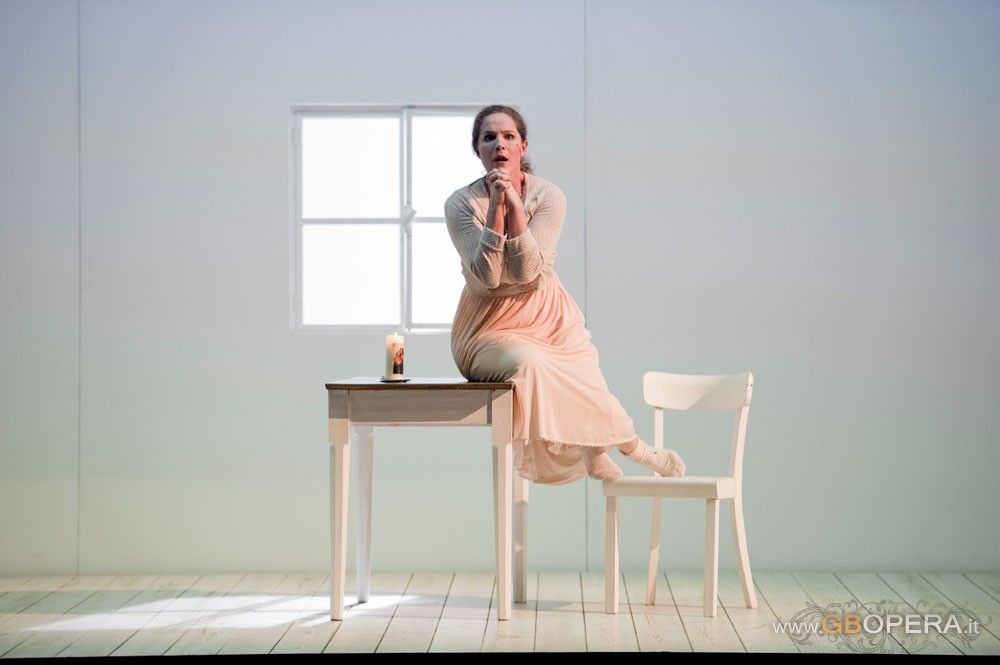 Producer Christof Loy’s first work for the Deutsche Oper Berlin was Jenufa in 2012. 9th February 2014 saw a revival of the successful production with almost the same cast of the opening night two years ago. Loy avoids almost all folkloric elements and concentrates on the drama as such by transferring it to the present time. Starting with Kostelnička who enters a prison cell with a modern design bag, the story is told as a kind of retrospective of what happened. The approach is supported by the stage design by Dirk Becker that is often an assembly of photographic pictures. It turns the evening into something esthetical but one should know the plot to understand the reasons for the actions of the characters, above all Kostelnička’s. The pictures and their framework underline the idea of a confined world with religious and moral standards which are so pure that the dominating colour is white. Sometimes the background opens up for a broader view of a lovely corn field in summer in the 1st act and the same but then hostile icy landscape in winter in the 2nd. But the room where the action takes place is normally closed by walls, doors, windows etc. and it widens or shrinks on the two sides. Sparsely used props focus on the characters. Jenufa probably goes through most development during the evening, a happy expecting girl in a bright red dress in the 1st act, a hidden and worried young mother in home clothes of pastel colours in the 2nd, and a black bride in the 3rd (costumes Judith Weihrauch). Kostelnička yet is the action driving character who tries to save Jenufa’s honour and does not even shy away from murdering her baby. She dominates the stage in her uniformly black outfit almost all the time that looks designed by Dior or Prada rather than H&M or C&A. Grandmother Buryjovka completes the female trio of three women who represent three generations of the Buryja family. She is mostly present in the 1st and 3rd acts and leaves no doubt that she has seen a lot in her long life and Steva is her favourite grandson. The two half-brothers are characterized by their contrasts. Steva is the bon vivant and beau in his smart suit whereas Laca is the down-to-earth farmer who is watching Jenufa jealously in the 1st act to stand by her straightforwardly at the end even though he is second choice. Loy cannot avoid Janacek’s musical description of rural life and integrates the boisterous dance scene of the 1st act and the folk-song wedding choir of the last act with wonderfully choreographed mass scenes. His Personenregie is most compelling and it would make a great play without the music. But it is there and Donald Runnicles is reigning in the orchestra pit. Some inaccuracies at the beginning may be due to the first night of the revival run but they are forgotten as soon as the plot unfolds. He knows very well about Janáček’s complex and subtle music and gives space for beautiful passages such as the good night motif in the 2nd act. The sometimes direct sound of the percussion underlines the musical rhythm of the score. The Deutsche Oper chorus (chorus master William Spaulding) is perfectly in line with the orchestra, which is especially acclaimed by the audience at the end. All singers are committed to the elaborate production making sometimes forget that it is an opera rather than a play, above all in the 2nd act when the things come to a head. Hanna Schwarz is standing out as Grandmother Buryjovka. Her stage presence is striking and so are her tones. She marvellously starts the ensemble “Kazdý párek si musi svoje trápeni prestát”. Ladislav Elgr’s Steva is like Jana Kurucová’s Barena highly idiomatic. His rather lyrical tenor with Slavonic qualities and his good looks are ideal for the role of the womanizer. His not understanding the final situation is most convincing. Laca is sung by Will Hartmann whose more dramatic tenor has it all for the demanding role including the jealous outbreaks of the 1st act and thrilling top notes. Michaela Kaune has developed out of the Deutsche Oper company as a leading lyrical soprano. Her Jenufa is finely played and sung, and the big solo scene of the 2nd act culminating in the prayer is undoubtedly a highlight of the performance. Yet the vocal radiance in the upper register is somehow missing, which was also evident in the finale of the opera. I admit that I do not have an unambiguous opinion about the Kostelnička of Jennifer Larmore. As usual the acclaimed belcanto and baroque singer has studied her part very well but for a Kostelnička it is not enough to sing the notes (she sings all of them, also in “Co chvíla!”) and act impeccably according to the producer’s Personenregie. Kostelnička must also have some vocal personality and if I recall Mödl, Olivero, Varnay, Jurinac, La Ry(sanek), Kniplová, Randová or Urbanová, the reader may know what I mean. Simon Pauly is a young Stárek whose vocal presence was suffering from his struggle with the Czech text. Stephen Bronk is a competent Mayor whose wife is sung by the veteran Nadine Secunde. Both Martina Welschenbach and Alexandra Hutton have fresh voices for Karolka and Jano, respectively and Fionnuala McCarthy as herdswoman completes the cast. Photo Monika Rittershaus