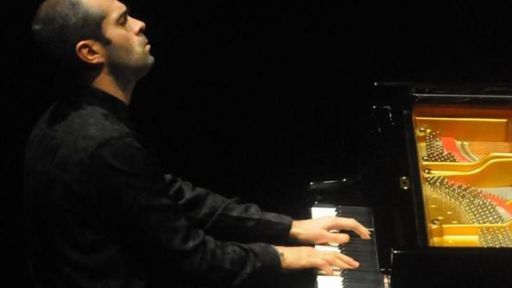 Verona. Teatro Ristori. Amici della Musica di Verona Concert Series 2013-2014.
Piano Alberto Nosè
Ludwig van Beethoven: Sonata op.13 in C min. “Pathetique”
Franz Liszt: Mephisto Waltz n.1
Johannes Brahms: Klavierstücke op.18
Maurice Ravel: La Valse
Verona. 4th February, 2014
A recital by the internationally acclaimed Veronese pianist, Alberto Nosè,  was the 7th concert of the Amici della Musica Society concert series at the Ristori Theatre in Verona on Tuesday 4th February. The pianist presented a programme of particularly well-known and much loved works from the piano repertoire,  Beethoven’s Pathetique Sonata, Liszt’s first Mephisto Waltz, Brahms 6 pieces  and Ravel’s La Valse.
His approach to the first work on the programme, Beethoven’s Pathetique, an effulgent example of the composer’s fiery, young temperament, was forthright and direct, favouring the forward thrust of the vigorous character of its first movement over the pathos of its dramatic tension. Exemplary technical clarity and articulation,  resolutely contending with the bass tremolo, the brusque right -hand jumps between registers in the second theme and its associated modulations, and the transparency of the tight juxtaposition of the two themes in the development, and the sudden and peremptory conclusion after the last reappearance of the initial theme.  The  romantic and tender second movement cantabile, was not overly contemplative, while  the third and last movement, the rondo, balanced grace and articulation, bringing the work to a convincing close.
But it was the following work, the  Mephisto Waltz n.1 by Liszt, that Nosè came into his own. He faced the fiendishly virtuoso score with power and control, throwing himself into it with passion. The details were never blurred, each line and voice distinguishable within the complex technical structure. The brilliance and regularity of the scales, the rippling of the runs, the thrill of the glissandi, the clarity of the trills, the weight and energy of the contrary motion and consecutive chord and octave passages, the impulses and outbursts, the obbligato and superimposed voices reminding the listener that the stunning virtuoso display is inextricably linked to the drama and spirit of the Mephisto/Faust episode, all added to the momentum of the impetuous  finale. Between the decidedly theatrical works, the Mephisto waltz and Ravel’s La Valse, the insertion of the 6 Klavierstücke op.118 by Brahms, was a perfect contrast and foil, allowing for a moment of  calm and introspection before the second of these two overwhelming works.  Although a coherent unity, the Klavierstücke are effectively six individual miniatures, brief and intimate, dedicated to Clara Schumann.
The climax of the evening came with Ravel’s version of La Valse for piano. From the initial, expectant  rumbling of what would be double bases, through the build up of chromatics, cross-rhythms, compound glissandi, all manner of piano effects, rubati, fragments, virtuosisms, waltz citations, this homage to the great Johann Strauss whirls and spins with vigour and rapture, propelling the music into a final obsessive danse macabre.  Nosè enthralled the packed hall with the ease of his technical prowess and the force of his momentum as he swept the music and audience into the final frenzy. A standing ovation was rewarded with four much requested encores, three Preludes by Gershwin and Feux d’artifice by Debussy. Photo Brenzoni