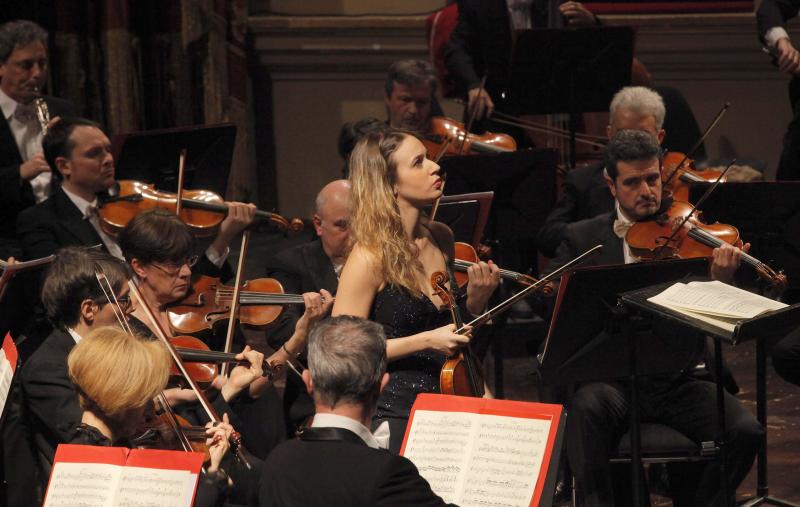 Following her two appearances in the last two seasons in Verona, performing the Beethoven Violin Concerto and the Mozart Sinfonia Concertante, Anna Tifu returns with a cornerstone of the violin repertoire, the Brahms Violin Concerto. She enchanted the audience with a polished and intense performance. Her admirable technical precision and elegance was matched by her  musical maturity,  expressiveness and shimmering sound. Every note resulted etched and emotionally experienced, drawing the listener into the splendour of her web. The care and thought given to the shaping of each phrase, to the significance of each note was evident to the listener for the manner in which it was offered.  She seduced with the beauty of every single note, vibrant and sweet, powerful and resonant, in what was clearly a  constant research for beauty.  The low notes were deep and resonant, the highest, of an ineffable sweetness. She demonstrated an impressive grasp of the concerto’s expansive contours, in turn, amalgamating beautifully into the rich orchestration, or soaring above it. She wove between the determination and authoritativeness  in the many passages of grandeur, and  the searing  intensity and sweetness of her pianissimi high notes in the introspective ones. Her intense pianissimi penetrated even the most obtrusive dynamics of the wind section.  A beautifully balanced performance, again between the peaceful pastoral disposition of the second movement and the rustic energy of the tzigane inspired last movement. She delighted the enthusiastic audience with the sarabande from Bach’s Partita n. 2 as an encore. However, not everything ran smoothly in the performance. At times the orchestra seemed uncertain.   It took a few bars at the beginning of the third movement to understand what direction the orchestra was taking, and the balance of timbre and dynamics was not of the most refined.  The orchestra, under the baton of Franz Schottky, at each new entry in third movement, missed the opportunity to recapture the original tempo. The result was a gradual slackening of momentum which resulted in a heavy lagging spirit. The Shostakovich Symphony was also lacking in the spirit that is so characteristic of his music. Although a very early work, written for his last year at the Conservatorium, it already holds many, of what were to become, his linguistic trademarks; a considerable dose of sarcasm and grottesqueness, transparent orchestration, the elaboration of  clearly defined details,  the ability to exploit, with ingenuity, every possible use of timbre, and a masterful use of counterpoint and cross-rhythms.  In the performance, very little of this transpired, and the symphony remained rather flat and did not go beyond a routine reading, with some untidy moments. A mention, however for the principal cellist, whose many significant solos were assertive and expressive. Photo Ennevi