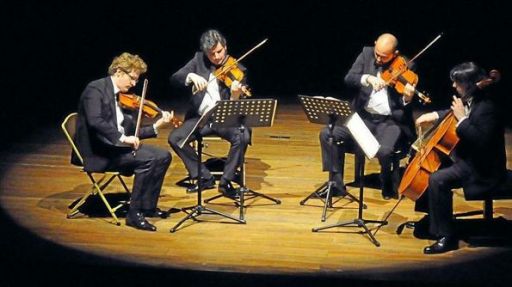 Verona. Teatro Ristori. Amici della Musica di Verona Society. 104th Concert Season. 2013-14.
Quartetto di Cremona
violin  Cristiano Gualco, Paolo Andreoli
viola   Simone Gramaglia
cello  Giovanni Scaglione
Ludwig van Beethoven: String Quartet n° 10 in E flat major, op.74, ‘The Harp’;  String Quartet n° 14 in C sharp minor, op. 131
Verona. 17th March, 2014.
Three beautifully representative works were presented at the concert of the Quartetto di Cremona for the Amici della Musica Society in Verona.  In an all Beethoven programme they traced an itinerary which encompassed the three periods of his quartet production; the early,  the middle and the late.
The quartet opened the concert with the engaging ‘Harp’ quartet, n°10 in E flat major, op.74, so named for the characteristic pizzicati from rotating combinations of the ensemble and the crescent arpeggios.  The Quartet moved with perception and  sensibility through  this work so rich in musical ideas, idioms and playing techniques. The unique shape of each movement was defined without losing the momentum of the thrust of the overall musical arch.  After the long and dramatic introduction, the long lines of counterpoint and dialogue floated over the contrasting harp-like accompaniment before establishing its heroic quality. The beauty and sweetness of sound  and the  elasticity of phrasing from the first violin of Cristiano Gualco were a constant throughout the evening.  The other members of the quartet displayed an equal capacity for beautiful tone production and musical moulding both in the accompaniments as well as their more prominent solistic moments. After the restrained sweetness and alternating poignant longing of the second movement the quartet exploded into the volcanic scherzo, never losing control over the tautness and incisiveness of the musical tension.  The  series of variations of the last movement was a seamless transformation of mood and character of the spirit of each variation in a calibrated unity of purpose and expression, from the intensely intimate to the  energetic  rhythmic and devilishly brilliant.
The second half of the programme was devoted to one of Beethoven’s last works, and the work he  is purported to have considered his most perfect, the op. 131. Expressions of unmitigated and ineffable admiration for it have been attributed to Schubert and Schumann. This elusive work  has gained a new found popularity even amongst non concert goers,  thanks to the recent film ‘A  Late Quartet’. The story of the film is constructed around its rehearsal and performance. The particularity and greatness of this quartet make it an exceptional metaphorical vehicle for the complexities of the human condition.  The Quartetto di Cremona demonstrated a thorough and deep analysis of this enigmatic and monumental work  of seven linked movements.  They captured the overriding sense of fluidity and unity with each movement closely intergrated. The sublimity of the slow painful initial fugue, the delicate dance of the second, the shared simple theme of the variations of the  third, the brilliant presto and the shift from the sombre introduction to the violent rhythmic and  the soaring lyrical of the last, were all presented with a continuous sense of conversation, with particular attention to the balance, the form, the content and the gradual thickening of the  textures. As an encore the quartet chose the adagio affettuoso ed appassionato from Beethoven’s first quartet op.18 n°1 perhaps as a homage to Verona, as it is claimed that this movement was inspired by the tomb scene from Shakespeare’s Romeo and Juliet. The searing pathos and  drama of this  work  was conveyed with poised and sustained emotional intensity and expressiveness, in a fitting and moving conclusion to the concert.  As a prelude to the concert,  the historical recording of a performance of three movements of Bach’s English Suite n°2 by Martha Argerich on 11th February 1969 for the Amici della Musica at the Teatro Nuovo in Verona, was played to the darkened auditorium.  The excellent quality of this live recording, besides testifying to the technical and musical greatness of Argerich, managed to conserve the  excitement and atmosphere of the live performance.  Certainly a precious and laudable initiative. Photo Brenzoni