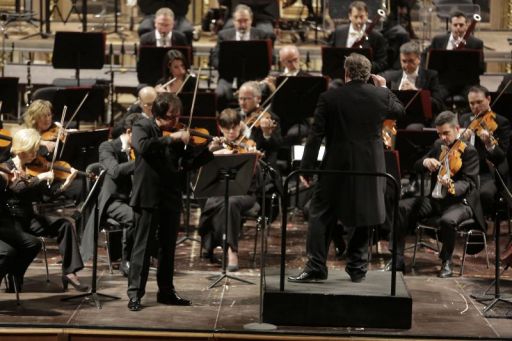 Verona. Teatro Filarmonico. Fondazione Aena di Verona. Symphonic Season. 2013-14.
Arena di Verona Orchestra
Conductor Roman Brogli-Sacher
Violinist  Sergej Krylov
Soprano  Lisa Houben
Piotr Ilich Tchaikovsky : Violin Concerto in D major, Op. 35
Gustav Mahler : Symphony N°4 in G major
Verona 7th March. 2014.
It was an unusual sight to see an excited crowd milling around outside the Teatro Filarmonica in Verona, queuing for tickets for a concert in the symphonic season of the Fondazione Arena. The object of such rare enthusiasm in Verona was for a performance of the Tchaikovsky violin concerto by Sergei Krylov.  And he did not betray their expectations.  Krylov gave a performance charged with intensity, passion and brilliance. He played as if possessed. Technically electrifying, every note was, simultaneously, perfectly calculated and thrillingly death defying. The performance was dramatically gripping with passages of poignantly sweet tenderness: moving and mesmerizing. His vigour, control, and vibrancy never wavered.  Every point of bow contact, and even the most fleeting of  notes was perfectly placed for maximum technical and musical yield.  Never  mere effect, his virtuoso was never an end to itself, but at the service of a deeply meditated interpretation. At the end, the enraptured audience exploded into a thunderous, cheering applause.  If it were possible to raise the audience’s threshold of pleasure, he managed it with the encores.  First, the violin transcription by Bruce Fox-Lefriche of  Bach’s massive Toccata and Fugue in D minor for organ, executed with undiminished power and zeal.  The intricate complexities of the counterpoint were rendered with clarity and incisiveness, the musical and harmonic arch with  depth and resonance.  A truly virtuoso feat which held both orchestra and audience in rapture. In what seemed a dizzying display of one-upmanship he rewarded a euphoric audience with the emblematically virtuoso caprice n° 24 by Pagannini, before leading the concert master off stage to signify the end of a triumphant performance.
The confidence and ease of the soloist was not matched by the orchestra during the concerto. They played on the defensive, and often had to be dragged along by the soloist; once in a very theatrical manner. The overall balance was uneven and often unsympathetic to the solo violin, especially from the winds and horns. All this, despite the prompt and clear directions of the conductor, Brogli-Sacher.  The second half of the evening was devoted to Mahler’s 4th Symphony, which, with its classical poise and unusually restrained opening,  provided a complete contrast to the passionate and intense first half of the programme.  Often considered Mahler’s most accessible symphony, it is the most lightly scored and  has no heavy brass. It is ostensibly simple and has a light and serene character with even some playful moments. The guileless nature of the opening sleigh bells, and  the voice in the child’s vision of heaven in the final  Das himmlische leben, give it an ethereal air, while the opening of the last movement reflects bucolic peace and tranquillity.   In the second movement, the depiction of Freund Hein, a medieval personification of death by a  solo violin tuned up a tone, and often accompanied only by a string quintet, gives a grotesque and  popular feel.  The symphony is however also endowed with rich counterpoint in the first movement and extensive variations and refined melodic beauty in the third. The orchestra, under the accurate and  expressive direction of Brogli-Sacher gave a faithful delineation of the alternating character of the symphony without adding anything in terms of  charm or finesse. The soprano Lisa Houben, gifted with a strong, vibrant voice, overcharged the final lied with emotion.  The pure, even line of a sustained breath control was missing,  rendering more carnal than celestial the embodiment of candid, child-like wonder.