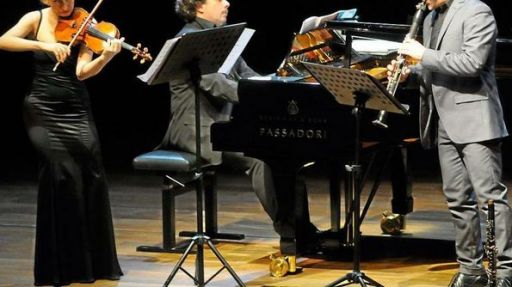 The concerts proposed by the Amici della Musica Society in their 2013-14 winter season, present internationally acclaimed artists and chamber music formations in programmes which range from the purely traditional and established, to the extremely original and innovative, offering stimulating comparisons and parallels regarding both repertory and instrumentation.  In the most recent concert, on 6th March, two renowned performers, the violist, Christophe Desjardins, and the accordionist Teodoro Anzellotti united to form an original and unusual combination. Both performers, prestigious soloists in the European Contemporary music scene have brought their individual  cultural and linguistic experience to the endeavour.  Anzellotti’s bravura has been a fundamental contribution in having the accordion accepted in the classical music world. Their programme contained a rereading of 18th century works of the traditional viola repertory, replacing the harpsichord accompaniment with the piano accordion, the 20thcentury Britten masterpiece for viola, substituting the accordion for the piano, harp or string orchestra accompaniment, a reworking of 6 lied from Schubert’s Winterreise, and a contemporary composition by Marco Stroppa written expressly for these two instruments.
In a conference, before the concert, Desjardins, assisted by Anzellotti and Stroppa , traced the history of the viola repertory from the baroque to the present, as an introductory background to his present efforts in extending the technical, musical and expressive possibilities of the instrument.   What transpired, was his desire to explore the viola/ keyboard genre from a fresh point of view, and to shift the accepted perceptions. This he did with particular attention to the tone colour capabilities and performing techniques of the two instruments.
With disarming simplicity, they preceded the Britten Lachrimae with the brief statement of the Dowland madrigal on which it is based. Britten’s superb ten variations on a theme, gave ample scope to the two instruments to exploit all their available characteristics, from the intrinsically melancholy and nostalgic nature of both, with their imitation of lutes and viols,  to the wildest and passionate  passages  of defiance and the myriad range of colour effects.  The structural rigour was balanced by the  tone colour definitions and, in its most tender moments, a particularly warm and sweet  singing viola sound in a fine performance.
The Winterreise selection, seemed orphaned by the lack of its all important text. And notwithstanding the virtuosity, the delicacy and levity of Anzellotti’s touch,  and his tasteful imitation of organ registers, together with Desjardins elegant musicianship, the Bach G minor sonata, and to a lesser degree the W.F. Bach Sonata were not always convincing.  Marco Stroppa‘s  work, Nous sommes l’air, pas la terre…, was presented informatively before the performance, allowing the public to follow it with a more focused awareness.  In contrast to the other works on the programme which played on the complementary qualities of the two instruments, Stroppa’s work concentrates on the fusion of the two instruments’ sounds. Their voices are indistinguishable.  They blend, superimpose, spin away in various states of fission as conceived by the composer.  The artists demonstrated absolute technical mastery and musical imagination in rendering justice to this significant work, which together with the Britten was the highlight of the evening. The concert was received warmly by the audience who were rewarded by a Haydn encore.Foto Brenzoni