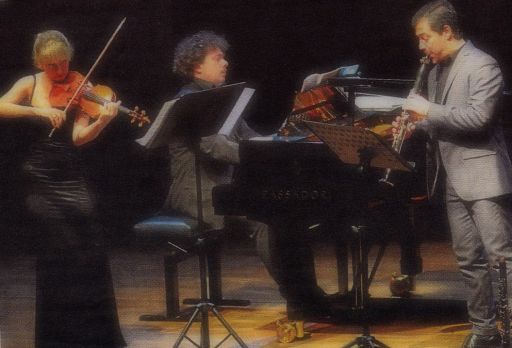 Verona. Teatro Ristori.  Amici della Musica Society, Chamber Music Series 2013-2014.
Violin Elisa Eleanora Papandreu
Clarinet  Alessandro Carbonare
Piano  Monaldo Braconi
Francis Poulenc: L’Invitation du château
George Gershwin/Robert Russell Bennett: Ballate from “Porgy and Bess”
Igor Stravinsky:  Suite from L’Histoire du soldat
Jörg Widmann:Fantasy for solo clarinet
Kurt Weill/Anton Giulio Priolo:  Threepenny in the Dark (2013)
Reiner Kuttenberger:  Habdala-Blitspost (2003)
Verona. 25th February, 2014.
The combination of piano, violin and clarinet, infrequent composition of a chamber music ensemble, proffered a programme of rarely performed works from the 20th century, at the concert of the Amici della Musica in Verona on Tuesday 25th February. The trio was made up of three established and prominent colleagues, Elisa Eleonora Papandreu, violin, Alessandro Carbonare, clarinet,  and Monaldo Braconi, piano. The programme was especially appealing for the originality of its choice of  irresistible rarities, and the three soloists shone for technical brilliance and musical refinement.
The three works in the first half of the programme were all conceived for the stage and provided  the trio with the scope to portray the theatrical and vocal elements inherent in the different dramatic situations. The first work on the programme was Poulenc’s incidental music for Jean Anouilh’s satirical play L’Invitation au chȃteau.  The musicians immediately demonstrated their particular  sensibility in creating the background mood depicted by Poulenc to support the range of  emotion from the sensitive and susceptible to the manipulative and unscrupulous nature of his characters, and the fantasy world of romance, nostalgia and forgotten dreams.  Even more clearly sketched, after a haunting arrangement by Robert Bennett of  a Gershwin medley, Bess You Is My Woman, and It Ain’t Necessarily So, was Stravinsky’s own version of L’Histoire du Soldat for this particular combination of instruments. The cosmopolitan spirit of the different musical references , the march, tango, waltz and ragtime, were clearly portrayed and the  definition of the  rhythmic fragmentation and the various facets of counterpoint were incisive. The individual timbres were balanced and woven  into the complexity of the music, highlighting effectively the grotesque and demonic character  traits, and the difficulty of the ensemble playing was belied by the ease and self-assurance demonstrated by the performers. Braconi masterfully and tastefully provided the musical and dynamic core around which the other two instruments entwined.
The second half of the programme opened with a solo clarinet piece, Fantasia, by the contemporary composer, Jörg Widmann. The suitability of the writing for the instrument betrayed the composer’s background as a clarinettist. With all manner of technical challenge, including the simultaneous sounding of two notes, the composer explores all the possible characteristics of the instrument.  A wonderful show-piece for Carbonare who ran the gamma of his expressive possibilities, enchanting with the warm, velvety sonorities just as much as by his technical feats, without ever losing the overall arching shape and sense of phrasing. The following piece, Threepenny in the Dark(2013) by Anton Giulio Priolo, a fantasy based on the theme of the Cannon Song by Kurt Weill,  was rendered with determination and clarity, and offered all performers cues to shine. Particularly striking during the evening, was the skill with which the violin and clarinet often seemed to be one indivisible instrument, homogeneous in timbre.  With the last piece in programme, the trio launched into a the exhilarating realm of Klezmer with a vibrant performance of Reiner Kuttenberger’s Habdala-Blitzpost, arousing a corresponding enthusiasm from the audience. The trio responded with three encores, including  Duke Ellington and more klezmer, sweeping the numerous audience along with their joie de vivre. Foto Brenzoni