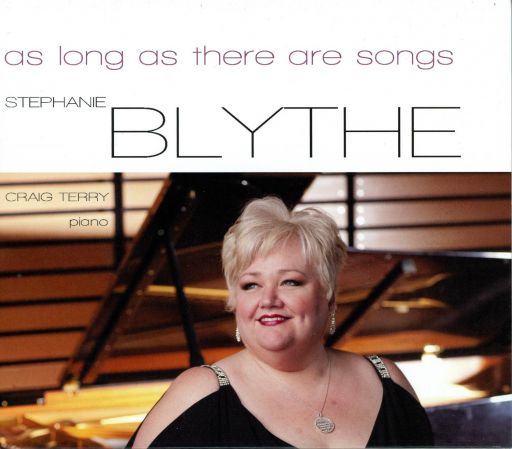 Stephanie Blythe:”As Long as there are songs”

Please Be Kind (arr. S. Blythe and C. Terry); Bei mir bist du schon (arr. S. Blythe and C. Terry); Serenade In Blue (arr. S. Blythe and C. Terry); White Cliffs of Dover (arr. S. Blythe and C. Terry); Sally: Look for the Silver Lining (arr. S. Blythe and C. Terry);  Always (arr. S. Blythe and C. Terry); Ziegfeld Follies: Love (arr. S. Blythe and C. Terry); St. Louis Woman: Any Place I Hang My Hat Is Home – The Sky’s the Limit: One for my Baby (arr. S. Blythe and C. Terry); How Deep is the Ocean? (arr. S. Blythe and C. Terry);  A Star is Born: The Man that Got Away (arr. S. Blythe and C. Terry); The Thrill is Gone (arr. S. Blythe and C. Terry); Wrap Your Troubles in Dreams (arr. S. Blythe and C. Terry); Pinocchio: When You Wish Upon a Star (arr. S. Blythe and C. Terry); This is All I Ask (arr. S. Blythe and C. Terry). Stephanie Blythe (mezzosoprano), Craig Terry (piano). 1 Cd Innova 875
As Long As There Are Songs by Stephanie Blythe must not create wrong expectations: it is not a collection of operatic arias. A pure opera fan might not feel at ease with this recording by the famous Met resident mezzo and quickly dismiss it. Still Stephanie Blythe is not the first opera singer diverting from a strictly operatic repertoire: one fine example – Kiri Te Kanawa, who recorded two albums, Kiri Sidetracks and The  Kiri Selection, in which she gives her signature treatment to jazz standards like “Autumn Leaves” and famous pop songs like “With You I’m Born Again”.
Blythe’s operation is very similar, the only difference being that she deals with the so called Great American Songbook repertoire, encompassing all the most representative compositions of the 20th century American popular music, belonging to the tradition of musical theatre, Broadway, Hollywood musical films as well as the jazz repertoire. Blythe performs songs that belonged to the catalogue of singers like Frank Sinatra (“Please Be Kind” and “Serenade in Blue”), as well as numbers taken from famous shows like Ziegfield Follies or songs become signature pieces for artists like Judy Garland, for example “The Man That Got Away” (taken from the popular musical A Star Is Born) and “Look For The Silver Lining” (taken from Sally), up to “When You Wish Upon a Star”, taken from the Walt Disney’s Pinocchio soundtrack. Examples and quotations might go on and on, but to help our readers understand the historical period we are talking about, it is useful to specify that the majority of the tracklist belongs to the first half of the 20th century.
This very specific repertoire is not very popular among the Italian audience, but this is not a reason to find it difficult to approach: it is a very pleasant listening, the value of which is very clear even to those who are not fans of this genre. No dramatic atmosphere, no forthcoming death and no troubled heroine like in opera, but Blythe’s pure, patriotic tribute to the great American authors. And it should come as no surprise, as Blythe is the daugther of a jazz musician, before being an internationally acclaimed mezzo.
Blythe abandons her role as opera singer to plunge herself in that of the showgirl… and what a showgirl! Even though her voice in this record is far from the usual operatic performance, her style remains opera-oriented, giving a terrific energy to these recordings characterised by a remarkable quality of interpretation. Nevertheless, the impression that the listener gets from this unusual vocal approach is that Blythe’s vocal style suffers in terms of breath and clarity of singing: every now and then, Blythe’s voice seems to come from the throat and quite far from the excellence of her Wagnerian performances (notoriously, as Fricka). This new use of her voice does not work most of the times.
Craig Terry’s accompaniment suggests a smokey intimacy, like that of an American jazz club, and a more grounded essence, far from the magniloquence of the operatic arrangements and thus way more accessible to a wider audience, maybe one more familiar with off Broadway theatres rather than operatic stages. The choice of a live recording for the album adds roughness, reinforcing the impression of a deliberate decision of the artist to distance herself from her usual performing image and to go straight to the roots of American popular music, almost wanting to reach them by digging with her hands in the land: such an impression is confirmed by the realization that Blythe had an active role, together with Terry, in arranging all the tracks of this collection. A pop record – not in the usual sense, but only in its structure – for an undoubtedly talented performer who, in this listener’s opinion, is at her true best when she sings opera.