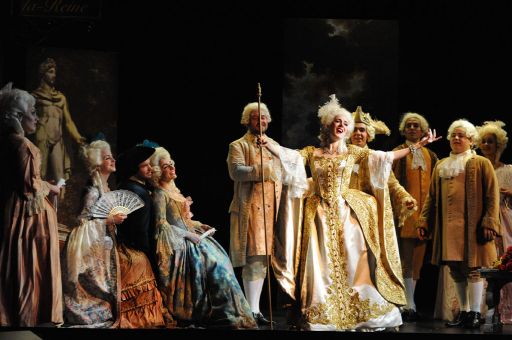 Jules Massenet’s retelling of Abbé Prévost’s 1731 novel is no easy matter for theaters, so it is all the more remarkable that a school for young singers can manage such a feat. Manon requires a dozen soloists a chorus, crowd scenes but more important, depth of preparation and competence are necessary to bring Massenet’s quintessentially French masterpiece to life. Manon is the vocal and physical incarnation of a particular idea of the female principle which has become a signature role for generations of great sopranos. It requires grace, sexiness combined with an innocence unknowing and unknowable, a warm middle voice combined with a glittering graceful, strong supple and extended high register. The “French Isolde” as Beverly Sills described her, is a role with which only a few singers in a generation can make their mark, and at Philadelphia’s Academy of Vocal Arts, at least one young candidate convincingly presented herself. And she was not alone as a potential major singer in the years to come.
This remarkable singing school was able to present a “chorus” which, while small, would be the envy of many an opera house, with a group of strong polished well trained voice Stage Director Tito Capobianco took his young but poised performers and expertly told this big story on the small stage of the charming Helen Corning Ward Theater in the Townhouse-Mansion in Center City Philadelphia which houses the Academy of Vocal Arts. The female trio of Pousette, Javotte and Rosette would also be strong on any stage, although as young soloists eager to show themselves,, they did not always blend. This could be forgiven thanks to their talents.  Credit for achieving virtually professional musical standards onstage has to go to conductor Christofer Macatsoris, who is Music Director of the Academy. Excellent preparation also including the language coaching of Audrey Saint-Gil. However, it is not an Academy of Orchestral Arts and Macatsoris’s small group of local players did not achieve the clarity and precision of the stage, nor did they give a stylistically detailed account of Massenet’s difficult score. But this did not detract from the soaring moments onstage.
In the title role Sydney Mancasola displays a warm and supple voice with a spectacular top, including powerful sustained high D’s. Manon gets ‘bravos’ for her high notes, but must earn her keep in the middle voice, and here Ms. Mancasola also excels. She sang a lovely and moving “Adieu, mon petit table” at the beginning of Act II, with a warm easy sound she used with musical vocality. Her Gavotte was exactly the showpiece it is composed to be, showing not only repeated high notes, but with all the stylistic variations so prized in French vocalism and so rewarding to the listener, capped with stupendous high D’s.  Among the men, her partner, Diego Silva, as Des Grieux, has a sympathetic sound and attractive Latin presence, and sang very lovely “En ferment les yeux” in Act II. Jeffrey Halili, a 2006 AVA graduate, played and sang a first rate Guillot, taking full advantage of Capobianco’s staging to be a glowing vocal and comic presence without succumbing to the ‘hamminess’ which some of his less experienced colleagues indulged in. The male voice on a par with Mancasola’s belongs to a South African bass-baritone. Like the deep voiced Russians and Finns before him, we will soon be learning to pronounce his name: Musa Ngqungwana. His ample and rich voice sounds ready for any stage, and rouses the imagination to consider how he would sound in the major roles of the repertoire. Both he and Mancasola were 2013 Metropolitan Opera National Council Award Winners whose development is being followed by that organization.  The AVA’s Manon was a school production, but a very special school. In an intimate atmosphere of excellence these gifted and highly selected students performed one of the great pieces of the operatic repertoire to a standard which will serve them for their professional lives, and may propel some of them quickly into the top ranks of that profession. .