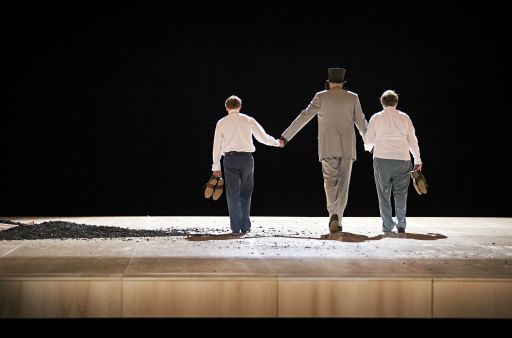 Glittering stardust is raining down on two pairs of shoes left on stage by Castor and Pollux, the two twin brothers who gain immortality through the two bright stars by the same names in the constellation of Gemini. That is the setting for a kind of show finale of Berrie Kosky’s production of “Castor et Pollux” by Jean-Philippe Rameau at the Komische Oper Berlin. The producer and director of the opera house has chosen the second version of the opera from 1754 out of dramatic reasons but along with conductor Christian Curnyn, they add two pieces of Rameau’s earlier version from 1737: Phébé’s scene at the beginning of act 5 and the beautiful aria of a planet sung by Télaire who remains lonely at the end next to her dead sister Phébé. All that is not really new but a co-production with the English National Opera London. It had its premiere there in 2011 and subsequently won Britain’s prestigious Laurence Olivier award for theater. As a London-based critic put it then, Kosky breathed life into Rameau’s Castor et Pollux. So does he in Berlin assisted by his London conductor and early-music specialist Christian Curnyn who makes the string instruments of the Komische Oper orchestra play with baroque bows for the first time. The musicians are seated on a higher level than usual and the conductor is among them before the performance starts. The orchestral sound is softer, quieter, more transparent just baroque but Curnyn does not insist on an original baroque sound. He is more after precise rhythmic tension, contrasts and elegance. Rameau’s masterpiece can be heard at one of the three Berlin opera houses for the first time and – against the tradition of the Komische Oper – in its original French language. The music is not as known in Germany as it is in France but Castor et Pollux will undoubtedly find its fix place in the wide opera repertory of Berlin. Even though there are extensive dance scenes in the score, Kosky does without any ballet. He develops them out of the dramatic run of the plot. Wedding guests will start to dance, the demons as well as the eternally happy shadows of the underworld. The chorus soloists of the Komische Oper are professional enough to be up for that under the leadership of chorus master David Cavelius. The action: two sisters, Phébé and Télaire love Castor whose brother Pollux also loves Télaire. Phébé is angry and wants to take revenge. After only 20 minutes Castor dies on the battlefield. Missing his brother and showing self-sacrificial love for Télaïre, Pollux offers to fetch Castor from the underworld, taking his place. Eventually both brothers are allowed to live in heaven, and Télaïre is left alone in the mortal realm, her sister dead. Kosky meets the emotional turmoil with aesthetical confinement supported by a wooden-box stage which is mostly left empty and made bigger or smaller through several wooden walls that are pulled up or lowered like curtains. A huge angular pile of black soil dominates the stage to represent the entrance to the underworld. Kosky also directs the singers in a physically challenging way. Castor and his murderer Lyncée are fighting fiercely, the jealous and unhappy Phébé is running against walls, both Castor and Pollux dressed in tailor-made suits are digging in dirt piles, God Mercury clad in business suit with gently waving feathered wings is bouncing up and down on the stage like a ballet dancer etc. The chorus members wear black skirts or trousers and white shirts or blouses commenting the action, lamenting, dancing. The opera opens with the two sisters in vibrant green and red dresses – the only splashes of color in an otherwise dull and mostly black and white palette (stage and costumes by Katrin Lea Tag). Jupiter, father of the twins, also wears a suit, platform shoes and a veiled top hat. He is accompanied by a high priest, complete with bleached white face and long, tentacle-like fingers. Their scenes remain episodes and Jupiter can do little about the run of the action. The heavenly enchantments appear like school-girls in pastel-colored baby-doll dresses. Their unruly long hair is completely covering their faces as they dance seductively around Pollux before removing some parts of underwear. There is a lot going on on stage but all details are integrated into Kosky’s approach. Musically, the singers reflect the stage action and the superb orchestral sound from the pit. Allan Clayton is the only of the cast who also sang in the ENO production in London. His lyrical tenor is able to handle Castor’s coloraturas and does not miss out on the tragic side developing from the lover to the suffering brother. His sometimes forceful singing is less baroque-like but thoroughly convincing. Günter Papendell has a dark-timbered but not too big baritone and is an ideal match – vocally and physically – for his twin brother in the role of Pollux. The scene when the two meet in Hades is particularly touching. Things look quite as good on the female side. Télaire is sung by Nicole Chevalier whose mellow and radiant soprano fits Rameau’s music pretty well. She makes highlights out of Tristes apprets with the two final “non”s (Rameau brilliantly anticipates here the much later development of opera) as well as the already mentioned planet aria at the end. Annelie Sophie Müller has a tougher voicewhich seems to be ideal for Phébé’s anger. She sings and acts expressively, perhaps the most intense performance of the opening night. Through the platform shoes the tall Alexey Antonov looks even taller and he offers a sumptuous bass for Jupiter well assisted by Bernhard Hansky as his High Priest. Mercure’s short but striking appearance is mastered by Aco Aleksander Bišćević’s light tenor who sings his bravura aria fabulously. Both singers, the chorus included, and production team were highly acclaimed by the audience at the end of a great and surprising evening. Photo Iko Freese