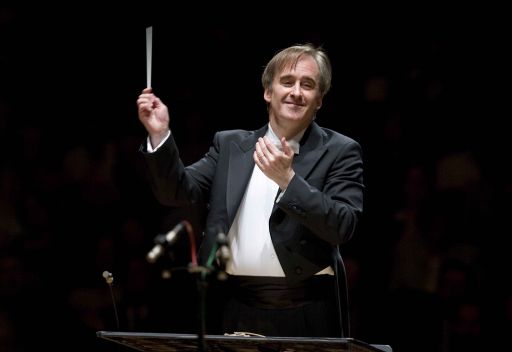 Guest conductor James Conlon prefaced the first work of Saturday evening’s concert, the third movement of Erwin Schulhoff’s Symphony No. 5, with a brief introduction to the Czech-German composer.  Schulhoff is among a group of lesser-known composers who were murdered and otherwise silenced by the Nazis, and whose music Mr. Conlon has championed over the past decade.  The movement is in traditional scherzo form, but is quintessentially modern (the piece was composed in 1938) and reminiscent, particularly in its rhythmic aspects, of Prokofiev’s style mécanique.  Conlon gave an exciting reading, while at the same time featuring a steady pulse and pointed articulation that maintained a sense of order and cohesion in this raucous music.
Following the Schulhoff was Shostakovich’s Piano Concerto no 1, which was composed during one of the composer’s recurrent periods of disfavor with the Soviet government.  It is an amiable, good-humored piece that placed Shostakovich, albeit temporarily, back in the good graces of the authorities.  The piece is technically a concerto for piano, trumpet, and orchestra, and while not a true double concerto, it features the trumpet in a prominent, but secondary role.  The performance featured pianist Jean-Yves Thibaudet and Mark Inouye, Principal Trumpet of the San Francisco Symphony.  Conlon’s reading emphasized the concerto’s neo-baroque elements, favoring lighter textures and a cool approach, with less emphasis on its romanticism.  The work was presented in a modernistic light that accentuated the contrapuntal elements and rhythmic pulse of the music; at the same time, however, Thibaudet, Inouye, and the San Francisco Symphony created a voluptuous sound that effectively counterbalanced the work’s pungent harmonies and dissonances.  This combination of coolness and luxurious sound resulted in a more Gallic flavor, one that happens to suit this particular work of Shostakovich’s very well.  There were times, however, where a deeper lyricism in the haunting moments of the piece would have been welcome (the primary theme of the second movement, for example), as would a more generous rubato and greater contrast between the beautiful, the acerbic, the playful, and the sardonic.  Thiebaud’s playing married a clean, Bach-like approach to his trademark beautiful tone that shone through even in dissonant fortisimmo passages.  The solo trumpet part requires an extraordinarily wide range of pitch and timbre – the low-pitched obbligato of the first movement, the muted melancholy of the second movement, and alternating moments of regality, humor, and poetry in the final movement – and Inouye navigated these extremes with a beguiling ease and perfect intonation.
The second half of the program, Tchaikovsky’s Symphony No. 6, was also on the cool and restrained side, especially when compared to the heart-on-sleeve sensibility typical of performances of this piece. The restraint was effective in places, such as in the initial appearance of the first movement’s celebrated theme.  However, this holding back continued in the recapitulations, so that even with the wonderful flow of Conlon’s phrasing the music lacked expansiveness and did not reach its full emotional potential.  The second movement “waltz” had ample grace, but the 5/4 meter was apparent (whereas it usually does not call attention to itself) and this drained the music of some of its charm.  The third movement was the highlight of the piece, with a wonderful Mendelsohnian pace and texture.  The final movement, which was delivered with superbly-executed dynamic shadings and rests, concluded the symphony with appropriate resignation, but did not fully convey the suffering at the heart of this masterpiece aptly titled Pathétique.