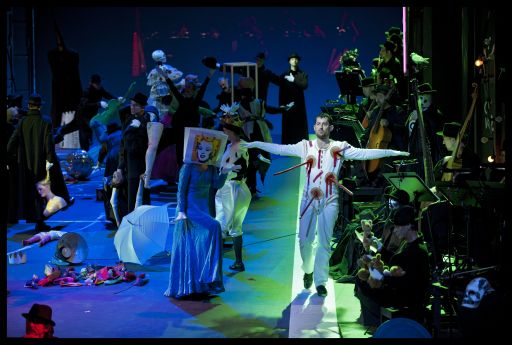 Back to the roots: it is arguable whether Emilio de’ Cavalieri’s workRappresentazione di anima et di corpo (Play of soul and body) can be considered the first opera or oratorio in history or whether it is the first early work of the kind that has survived over more than 400 years. That seems to be an academic question to be discussed by scientists of music. For our ears of the 21st century, it is a trip in time on the one hand when it is about the nearly archaic forms of the music. On the other, the subject of the work is timeless and it is the time, this special dimension of our life that makes up the story of Cavlieri’s early contribution to musical theatre. Time passes by and so does life. Tempo, the personification of time on stage hears the sound of the last trumpet at the beginning. All is transient but how do we deal with our time on earth? It is obvious that Cavalieri had the ancient Greek tragedy in mind when he developed his musical structures out of a homogeneous chorus that integrates the soloists who step out of and return to it during the 90 minutes without a break and the formally three acts become a whole. Like that producer Achim Freyer resolves the problem to stage something that is from today’s point of view an oratorio rather than an opera. When you enter the auditorium the stage is already set. It is like entering a church for the service. The stage is extended over the covered orchestra pit to close the gap between proscenium and audience. All people in the theatre become part of the story which consists of the general questions about our life as human beings. Freyer integrates everything and everybody by taking responsibiity of stage design, costumes and lighting. He uses disco balls illuminated by spot lights to turn the theatre hall into a brighter space than the predominantly black stage and costumes suggest at the beginning. Over the years and with milestones such as the production of Gluck’s Orfeo and Verdi’s Requiem at the Deutsche Oper Berlin, Freyer has developed a special kind of pictorial aesthetics which is omnipresent in this production and serves the purpose of Cavalieri’s Rappresentatione perfectly well. The result is the reflection of life as a kind of world theatre with less abundant antics than previously seen. Of course members of the acrobatic Freyer Ensemble romp about the stage sometimes in partly exotic costumes but they are integrated into the carnival-like athmosphere with circus lighting, a hopscotch game hand-scribbled on the central stage, rolling skulls and glow-in-the-dark skeletons. A clock hanging in the middle of the stage dominates it to make a point that it is the essential thing in the life of all creatures. The most striking element is the position of the orchestra. The musicians of the Akademie für alte Musik Berlin are lined up on the periphery of the stage sharing space with the choir on the left and right and extended at the backdrop as an extra orchestra playing behind a transparent curtain. That results in a heavenly and far-off sound from the back contrasting the direct earthly sound on both sides of the stage. So the two orchestras with fundamental and ornamental instruments may symbolize the present and next worlds. The fact that everyone on stage but the soloists is dressed in black with white gloves suggests the same idea. René Jacobs masterly conducts all musiciansfrom a kind of old-fashioned prompter’s box. In terms of music he is Freyer’s congenial partner. He has enriched the score by a number of instruments such as four harps, different types of lutes, viols, trombones, organs, a harpsichord etc obviously imagined by the composer. Jacobs creates a compelling and colourful sound of the succinct simplicity of the music, the symphony movements as well as the homorhythmic choruses and recitative solo parts. Members of the Staatsopernchor form the Madrigal Ensemble and members of the Konzertchor the hell choir excellently prepared by Frank Markowitsch. Among the thoroughly good cast, Mark Milhofer stands out with his cultivated tenor who sings both Intelletto (Intellect) and Piacere (Pleasure) with a remarkable phrasing. Gyula Orendt’s baritone masters the parts of Tempo (Time) and Consiglio (Council) very well whereas the baritone of Johannes Weisser is perfect for Corpo’s (Body) suffering and vulnerability dressed by a drilled through costume. Marcos Fink sings a dramatic Mondo (World) and Anima dannata (Damned soul) with his powerful bass-baritone. As Anima (Soul) Marie-Claude Chappuis is a real matchfor all the male voices with her clear and substantial mezzo-soprano making a highlight out of her echo scene. The prologue of Cavalieri’s Rappresentatione is convincingly spoken in German by two of the Aurelius Sängerknaben Calw, Tony Muresan and Hendrik Sehmsdorf. That coincides with the composer’s idea to present his work in Italian rather than Latin that was wildly used for church services at his time. The two boys also lend their voices to the Angeli custodi (Guardian Angels) along with Christina Roterberg’s attractive soprano. Luciana Mancini is the only singer who is allowed to show some bravura with her individual soprano to characterize the part of Vita mondana (Worldly life). Altogether Freyer and Jacobs stage a 90 minute allegoric masterpiece in a nearly ideal way. Photo Hermann & Clärchen Baus