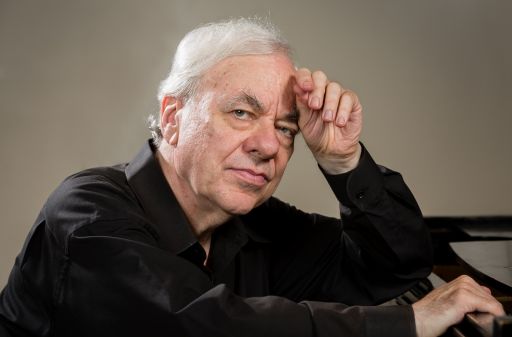 Richard Goode has arguably been the world’s foremost interpreter of Beethoven’s piano music over the last 25 years. When listening to Mr. Goode play Beethoven one can easily imagine the composer himself at the piano, which in this reviewer’s mind is the ultimate compliment.  At Friday’s evening recital of Beethoven’s late piano music at Stanford University’s Bing Concert Hall, Goode reached the higher plane that he regularly inhabits when performing Beethoven’s music – but it took awhile. The first half of the program comprised the Sonata No. 30 in E Major, Op. 109 and the Sonata No. 31 in A-flat Major, Op. 110. While Goode’s playing was exemplary, it wasn’t until the third movement of Op. 110 that the pianist was fully in “the zone” and elevated the music to a truly transcendent experience. There were some glorious moments in the Op. 109: most notably the final variation of the third movement, where bell-like accents in the upper registers rang beautifully above a wash of trills, and in the closing recapitulation of the theme, one of Beethoven’s loveliest melodies. But there was also a tentativeness (including some rhythmic unevenness in places in the left-hand/right-hand interleaving of the opening movement) that kept the music earthbound. In the first and second movements of Op. 110 Mr. Goode seemed to hit his stride, and then in the opening bars of the Adagio, liftoff commenced.   Fortunately the intermission did not bring Mr. Goode back to earth; things just got better and better. The second half of the program began with a selection of Bagatelles from Op. 119. These miniatures feature rapid, radical shifts in key and mood that anticipate the piano music of Robert Schumann, and in Goode’s hands their genius was wholly realized. The recital concluded with Op. 111, Beethoven’s final piano sonata, and by this point Goode was a vessel channeling this sublime music from above.  The Bing Concert Hall, which opened in January 2013, is a beautiful, modern and intimate space, and its marvelous acoustics allowed Goode’s exquisite and rich tone to shine.