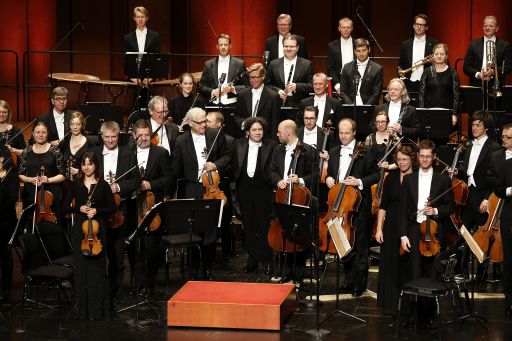 The performance of the Berlin Philharmonic Orchestra on Monday evening for the first time in Verona, was a momentous occasion in the city’s musical and cultural history. The Accademia Filarmonica’s prestigious concert series of international orchestras, which takes place in September each year, was missing this renowned name, having, over the years, already captured the likes of the Vienna Philharmonic, the Concertgebouw of Amsterdam and the Chicago Symphony Orchestras. Needless to say, the much anticipated concert was sold out well before hand. Perhaps the fact that there seemed to be little resonance from the media and the city itself around the importance and significance of this event, was owing to the fact that the majority of the seats are subscription. It was an important weekend for music lovers in Verona, with two first night operas at the Arena, and one felt that much more attention could have been given to this extraordinary conjunction.
The programme, the identical one played in Florence the following night, and to the one to be played at the giant open air theatres of the Waldbühne in Berlin the Loreley-Freilichtbühne at St. Goarshausen, later in the month, was made up of popular works from that core Romantic repertoire for which the orchestra is justly acclaimed, two tone poems of Čajkovskij and Brahms 1st symphony.
The first half of the concert was devoted to Čajkovskij, with two powerfully dramatic works, the symphonic fantasia, The Tempest, and the fantasy ouverture of Romeo and Juliet. The orchestra, under the guidance of the conductor Gustavo Dudamel, rendered justice to the more unfamiliar but wonderfully evocative Tempest, investing its continually contrasting sections and variety of moods with every degree of nuance and orchestral colour, from the placid shimmering sea in the strings, to the rapid flickerings of Ariel in the upper winds, the grotesque Caliban in the lower strings characterized by distorted rhythms and intervals conveying his monstrous shape, the glorious choral brass fanfares, the surging strings of the storm, and the sprawling and soaring love theme melody brimming over with pathos. The orchestra captured the atmospheric colour and splendour of the piece. The four principal woodwind players were even visually in symbiosis, passing themes and accompaniments from one to another, gracefully. Throughout the evening the brass were a strong and impressive presence but at the same time quite contained, in perfect balance with the strings; a difficult feat in a theatre not created acoustically as a concert hall.
From the poetic, atmospheric tone-painting of the Tempest, the orchestra seized the drama and emotion of the Romeo and Juliet overture fantasy, one of the most successful reconciliations in the orchestral repertory of a specific literary programme with the requirements of a logical, musical structure. The dramatic tension established by the orchestra right from the beginning, never wavered. The Lisztian chorale of the introduction depicting Friar Lawrence, the clear and articulate contrapuntal workings of the Allegro Giusto, the mounting thrill created by the stringent runs and cross-rhythms, with tight cymbal clashes of the fight scene, the sweeping lines of great lyricism of the luscious melodies, the searing suspensions, the cooing of the horns, the sensitive shape and form given to every phrase, totally engaged the audience, catching them unawares in apnoea in the brief silence before the final tragic dirge.   The same heightened sense of dramatic tension was carried over into the second half of the programme with the Brahms’ first symphony, from the opening bars of the introduction with the fatalistic, implacable tympany beats under the taut, heart-rending line of the violins, to the final radiant horn call and uplifting chorale. The performance was dynamic and embracing, a compelling mix of control and command matched with flair and passion. The glorious sonorities and weaving chromatics emerged and disappeared continuously into the rich fabric. The first movement was taken at a leisurely pace allowing time for complex transformations of change of rhythm, dynamics and timbre to come through. The ineffable sweetness and beauty of the rapturous violin solo together with the French horn in the second movement, was given an impassioned execution.  After an ecstatic ovation the orchestra conceded a perfect encore; the second movement, off-beat waltz from Bernstein’s Divertimento for Orchestra, for strings alone, performed with levity and lift. It gave the string section, and in particular the string quintet of the principal players, a chance to stand out, and for the orchestra to end a highly charged evening with charm and simplicity.