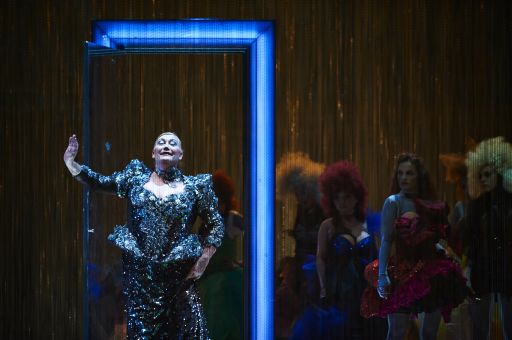 What is left nowadays of Bertolt Brecht’s criticism of capitalism? Certainly the question whether robbing a bank is worse than founding one. Money makes the world go around. This fact has never been more evident than in the last few years. So Brecht is fully right in his opinion and almost 85 years after the first staging of Aufstieg und Fall der Stadt Mahagonny (Rise and fall of the city of Mahagonny) in Leipzig, capitalism has developed into globalized imperialism. We are all dominated by the power of money and Mahagonny is everywhere. At the end of a successful season at the Deutsche Staatsoper Berlin (still in the Schiller theatre), Vincent Boussard stages the result of the brilliant cooperation of writer Bertolt Brecht and composer Kurt Weill. The widow Leokadja Begbick, Trinity Moses, and “Bookkeeper” Fatty arrive like homeless people with the supposedly inevitable shopping trolley at the beginning. They are wandering around behind a mirror on the gloomy stage (light by Guido Levi). In its centre there is a door that is at the same time a mirror, not a passageway to the open air but a place to encounter oneself. Glitter curtains are falling down, typical of Boussard’s productions and the stage decorations by Vincent Lemaires. Here they seem to be misplaced like the false glitter of the city of Mahagonny. Or do they want to tell us that however luxurious something is, it is just the expression of an over-individualized society and at the same time pre-fabricated life? Like that luxury designer Christian Lacroix’ costumes would absolutely make sense in the same way as the artificial and colourful hairdos of the girls who arrive in Mahagonny to make money as prostitutes (dancers in the choreography by Helge Letonja). The chorus men of the Staatsopernchor (chorus master Frank Flade) are all dressed in fashionable designer suits. The gloomy element of the beginning has long turned into shrill details. According to the text, the green moon really shines over Alabama and in the same way, Brecht’s verbal explanations are video-displayed (video artist Isabel Robson). The coming-up hurricane seems little threatening like Jack O’Brien’s gorging himself on food after a pig-headed ballerina’s dance with him and the boxing match between Trinity Moses and Alaska Wolf Joe which remains virtual even though Joe dies as a result of it. A lot is just hinted at for the sake of a more stylish or aesthetical look. The hurricane results in total consumerism that brings up another bang up-to-date problem. Whoever does not produce or consume, belongs to those who – in the logic of capitalism – dig off the resources of the others and had better get off, according to the recent essay “The superfluous man” by the writer Ilya Troyanov. But as Jim Mahoney puts it “I do not want to be a human being”. He himself becomes the victim of this way of thinking when he runs out of money – the only forbidden thing in Mahagonny – and is sentenced to death. Not even his lover Jenny nor “Bank Account Billy”, the only former Alaska companion left are willing to lend him some money. So the core of the Mandalay song comes true that love does not last forever. The young successful Heldentenor Michael König excels in the role of Jim Mahoney providing it with amazing top notes and the lamento even gets some Wagner quality. Evelin Novak as Jenny Hill is allowed to weara beautiful bridal dress and she finds some touching lyrical moments but her Wie man sich bettet, so liegt man remains harmless and is not ambiguous enough. That may be a general problem of an opera singer rather than a singing actor about Weill’s music. The same applies to the renowned Wagner singer Gabriele Schnaut whois Leokadja Begbick. Her part is well studied but her voice rather thin and not able to cope with the musical style between political cabaret and jazz. Yet her playing convinces as the boss of all business in Mahagonny summing up bills, collecting money for the love service of the prostitutes or as a judge in Jim’s trial. Her costumes vary between masculine tails and a sequin dress reminding the audience of Hella von Sinnen, a German comedian who is well-known for her short blonde hair and wearing shrill all-in-ones. Fatty, the “Bookkeeper”is sung well by the tenor Dietmer Kerschbaum and Tobias Schabel’s baritone fits in for Trinity Moses accordingly. Wayne Marshall conducts the Staatskapelle Berlin in a highly competent way and surprises with an extraordinarily subtle interpretation that does not call for any stilistic certainties but carefully goes for a complicated truth. The rhythmic framework is there all right but it serves as a kind of elegant background to emphasize the artistic misproportions of the sound between the different types of instruments such as tubas, strings, and banjos and bandeons. Photo Matthias Baus