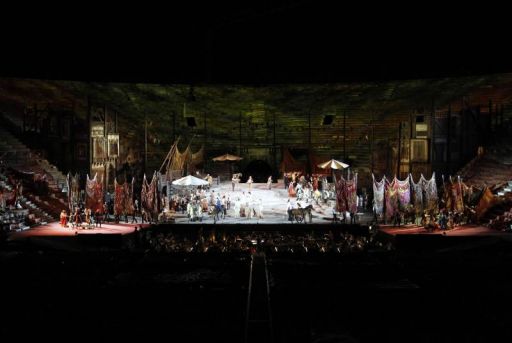 It was with a touch of melancholy that I followed the opening performance of Carmen in the Roman amphitheatre, celebrating the centenary of the first performance of this opera in the Arena. The sense of melancholy sprang from the recollection of the memorable original version of this production 20 years ago in 1995. Zeffirelli had created an opera, considered in local jargon as ‘un opera da Arena’..(an opera suited to the Arena). On the stage, the terraced steps of the amphitheatre were transformed by densely packed white-washed houses, into a   Mediterranean hill-top town, and in the third act, into a mountain range from which lights of scattered dwellings twinkled in the distance.   The Spanish dance company of El Camborio, laced the performance with authentic gypsy spirit and in the long intervals, could be heard extemporizing from the recesses of the amphitheatre. It is also true that the interval of the last scene change was three times the length of the final act, and that the dwindling resources saw cuts, first of all, in the stage-hand department. With the arrival of the financial crisis, Zeffirelli provided a leaner version, sacrificing the very elements which make the Arena so unique. He eliminated the scenic use of the terraced steps leaving them bare, camouflaged in the second and third acts by long painted panels positioned strategically around the stage-within-a-stage area of the main action. They simply give the impression of an expedient…..a bit shabby for the image of grandeur that the reputation of the Arena evokes. The fluttering of the rocky mountain panels gives a rather surreal and precarious slant to an otherwise earthy drama, and the intervals in any case, seem inordinately long for such a modest change of scenery. What has been salvaged, is the beautifully intricate and articulated down-stage action; the interplay of the crowd scenes rich in exchanges, attitudes, character types and situations, the pertinent presence of mounted riders which lend a truly authentic air of real life to the town square. This is enhanced by the magnificent costumes of the late Anna Anni, whose dress designs are as rich and varied as the populace that inhabits the town; the exquisite and easy elegance of the gentlefolk, the vivid and passionate intensity of the gypsies, and the faithful detail of the sundry ragamuffins, workers townsfolk and soldiers. Alas, the choreographic moments have mutated from the fiery, seemingly spontaneous vigour of the flamenco into a more systematic and balletic transposition.
Ekaterina Semenchuk‘s Carmen was more convincing both vocally and dramatically in the last two acts, where she seemed more at ease in conveying a tragic sense of doom and inevitability, than in the first two acts where her attempts to express carnality and sensuality resulted awkward and clumsy. Vocally her voice was clear and firm although in the first two acts, and in particular in the Habanera and Seguidilla, the vocal line was low on musical and expressive characterization. The role started to take form in the card scene and came into its own in the last act. Theatrically. there was a credible build-up of tension, even in the manner in which she took off the ring and simply dropped it rather than throw it, at Don José, as is customary. It was amazing to hear the indignant and uneasy reaction of the audience when Don José pulls out the knife: an eloquent confirmation of the protagonists’ dramatic ability of persuasion, and perhaps an indication of the Italian public’s heightened awareness and sensitivity to the ever growing phenomenon of ‘femminicidio’ in Italy! Carlo Ventre’s Don José was correctly and strongly sung but resulted flat and expressively pale until the last act. A voice of substantial body with good projection, it was nonetheless completely devoid of pathos which the role requires to express José’s temperament, inner turmoil, yearning and desire. The clean and articulated diction of Carlos Avarez‘s Escamillo gave his character presence and command. His performance was marred only by his anti-musical vice of hanging on to the last note well beyond any musical sense. Irene Lungu as the angelic counterfoil Michaela to Carmen’s femme fatale, brought her full round lyric to the role, albeit with a rather generic and self-indulgent interpretation of the text and music. A certain amount of the artistic responsibility for the lack of musical shape and form in general must lie with the conductor Henrik Nánási. While technically efficient and competent, he sent the music along briskly, neglectful of highlighting colours and timbres, or of allowing a moment of expressive elasticity in the tempi. The orchestra played proficiently although rather flat and uninvolved. The French horns stood out for their beautifully calibrated and sensitive playing. Unfortunately in the third act, the sound technicians must have decided that the music of this very atmospheric act was too soft, for the amplifiers were clearly turned up. The result was a playback effect of the orchestra, and a tone quality which had nothing in common with the other acts.  The chorus brought the real energy and colour to the performance, both vocally and stage-wise through their play of timbre and expression, together with a meaningful articulation of the text. Only occasionally did some soprano voices ruin the effect by indulging in an uncontrolled vibrato on the high notes, disturbing the overall compactness of sound. The children’s chorus stole the show with their well-performed mimic of the change of guard. Seung Pi Choi as Zuniga was credible. His delivery was clear, firm and straightforward, his timbre pleasing, and he cut a figure of self-assured authority. Francesco Verna as Morales was measured and secure. Francesca Micarelli, Cristina Melis, Federico Longhi and Paolo Antognetti completed the cast respectively as Frasqita, Mercedes, Dancairo, and Remendado. Photo Ennevi-Fondazione Arena di Verona