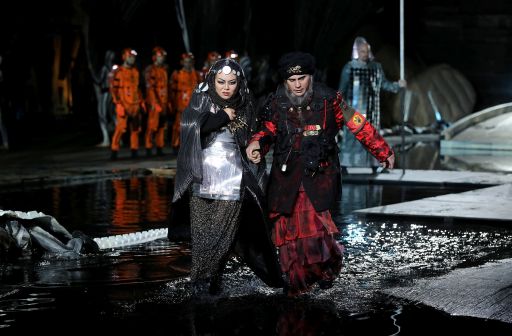 When it unexpectedly started to rain in the Arena, just as the opera was about to begin in on the opening night of this year’s Aida , it looked like the evening would be washed out. But after a false start when the real storm broke, at 10.10p.m. the opera finally got under way without further interruptions finishing at 2 a.m. The Arena was packed for the revival of the spectacular and monumental production, mounted by the innovative Catalan group Fura dels Baus last year for the Arena Festival’s centenary celebration.
It was interesting to see the production again from a year’s distance. On first viewing, the impression had been overwhelming for scope and grandeur, for innovation and technical vent…breathtaking and surprising at every turn, with any number of delightful and amazing devices and pyrotechnics: the rim of fire around the top of the Arena, the gigantic inflated sand dunes rendered even more realistic by exceptional lighting effects which cover the amphitheatre terraces, the flooded stage as the Nile, alive with crocodiles at first and later evocative with floating candles, the full moon and suspended gymnast, the sea of waving palm fronds, the shadow theatre for the ballet, the life-size, meccano elephants and camels with realistic body movements, the giant, gleaming, solar panel constructed during the performance and closing over to become the tomb-stone in the end, are just the most notable amongst many stunning effects. On the other hand some of the effects weigh the opera down, especially in the triumphal scene of the second act. The reference to the Egyptian scarabeo and the Italian scooter with the same name in a parade of electric go karts with a scarabeo logo, is cute, but together with the toxic waste barrels and mobile ladders on which the main singers are perched and the flat and packed massing of the chorus the effect is entertaining rather than spell-binding. The usual marvel and extended applause at this point of the opera becomes a short, polite acknowledgement. Consequently, too, throughout the opera, the musical side is often overwhelmed by the extravaganza.
The musical side, however, had problems of its own. The amplification of the internal female chorus, made it sound like it was coming from the bottom of a swimming pool, miking of the orchestra was uneven, and under the baton of Julian Kovatchek the tempi often lagged, and the orchestra, chorus and even the soloists were often out of synchronization….unforgivable for these Aida professionals. The impression was one of under-rehearsal and the effect was slip-shod. Fabio Sartori was a strong and commanding Radames, his voice powerful and ringing, his extension smooth and his musical line rich in dramatic articulation. The beautiful, rich vocal quality and lovely sustained phrasing of the Hui He, as Aida, seemed pushed to the limits and especially in the high register was often flat. Violeta Urmana was most incisive in her high register with her middle voice a little opaque in comparison. Her portrayal of Amneris gathered force in the final act. Gennadii Vashchenko was a light-weight Amonasro in a production which needed a forceful character and a strong vocal personality. Raymond Aceto was a convincing Ramfis and Sergei Artamonov an adequate Re, although the staging made it difficult to be dignified. Antonello Ceron was a clear and precise messenger. Maria Letizia Groselli‘s off-stage High Priestess was consistently flat in pitch.
The production is definitely memorable and perhaps its greatest merit is having exploited to its fullest the natural and vast spaces of the amphitheatre. A unique and compelling moment, is the almost imperceptible enactment of the Ethiopians’ escape amongst the distant sand dunes as Amonasro sings of their plight. But there are many other details that make this cinemagraphic edition worth experiencing.