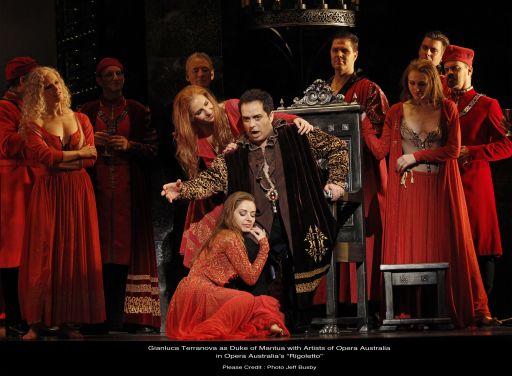 Opera Australia’s new production of Rigoletto, currently being performed in the Sydney Opera Season, manages to combine sleekness with traditional faithfulness to the original setting. The musical and dramatic thrust are aided and abetted by the taut tempi of the conductor, Renato Palumbo and by the clear and lucid vision of the director Roger Hodgman. Seconded, by his set designer Richard Roberts, the sets are streamlined and without period detail, containing just the right amount of props to evoke the appropriate atmosphere; an open air burning fire outside the inn in the third act, wall torches illuminating the lane and palace hall, one princely chair and table under a candle chandelier for the second act. Otherwise the walls, both internal and external, are made up of large serpentine blocks of stone, cold and uncharacteristic for Mantua, but effective in creating the foreboding and lugubrious air of disaster apparent from the opening notes. In the palace scenes, central palatial doors, open onto an internal hall, while others in the wings, onto the Duke’s chambers, giving the illusion of spaciousness to the very restricted stage area of the Sydney Opera Theatre. The background projections of fleeting clouds in the out-door scenes, are consistent with minimum employment for maximum effect approach. In fact the lighting, designed by Matt Scott, subtly enriches and enhances the scenery and staging from beginning to end, blending masterfully in a natural and congruous way. Tracy Grant Lord’s costumes inspired by Renaissance period costumes, but possessing a timeless quality, artfully sustain the overall visual clarity as well. The court scenes are relentlessly red, the courtiers outfitted in every shade and fabric, from velvet to brocades which are enlivened with trimmings of gold. The simplicity of the chiffon-clad, bare-footed courtesans, including Monterone’s daughter, in their balletic mime of the licentious court contributes to illustrate in an unobtrusive but explicit way the existing moral climate. An exemplary use of stage machinery in a perfect execution of seamless, silent, fluid, rotating and immediate scene changes were instrumental in maintaining the dramatic tension and continuity.
Gianluca Terranova, with his easy and effortless stage manner, smiling and light-hearted as he unconcernedly breezes through life, trampling over all in his way, gave a convincing characterization of the dissipation and superficiality of the Duke, chillingly similar in behaviour to that of a recent powerful Italian politician. Vocally Terranova was assured and intense, although at times his tone appeared forced. His first aria Questa o quella would have gained from a more buoyant approach and Parmi veder le lagrime from a more lyrical one. However, he carried his scenes with his whole-hearted and fervid vocal and dramatic involvement. From his entrance, Giorgio Caoduro‘s Rigoletto was a character clearly etched through his use of word, as befits the mocking, taunting, biting sarcasm and contempt expected of the court jester. His interventions were always focussed, expressive and articulated. This attitude was most successful in his declamatory scenes and in his continuous flow of conversation in his first meeting with Sparafucile. In his more purely vocal moments, he managed the more dramatically powerful and sustained lines with intensity but with some effort.  The girlish demeanour of Emma Matthews‘, opening scene as Gilda appeared affected and unnatural. Her voice resulted very light in the centre and her coloratura was always very careful. A tendency to flatness also marred the performance of an otherwise pleasing timbre, clean emission and even range. Surprisingly, she conveyed her purist and sweetest vocal qualities and legato phrasing at the closing moments of the opera. David Parkin was a physically impressive and vocally commanding Sparafucile. His acting was elegant and his phrasing well-honed. Dominica Matthews‘ Giovanna was an excellent and strong duenna. A firm, full voice, meaningful diction and convincingly played. Sian Pendry was convincingly flirtatious and dramatically effective but her vocal line struggled to come across. Gennadi Dubinsky as Monterone, Luke Gabbedy as Marullo and David Corcoran as Borsa were all incisive in their roles as were Samuel Dundas, as Ceprano, and Eleanor Greenwood as his wife. Ryan Sharp as a court usher and Lisa Cooper as a Page completed the cast.
The Opera Australia Chorus is an asset to this and other productions. In this case, we had only the men’s chorus to judge by. Their intonation was perfect, their sound was homogeneous, their quality full and smooth. They displayed a wide and refined range of well-judged vocal dynamics and characterization, supported by excellent diction. Their acting and reacting was natural and varied. They were never distracting nor distracted.
The orchestra was clean, precise, well-balanced, and quick on the uptake, although rather light and subdued, especially in the brass. Finely calibrated individual solo performances were given, and of particular note were the muted solo cello and double bass playing the sinister melody at the top of their range at Sparafucile’s appearance, and the cor anglais and solo cello reinforcing the desperate lament of Pietà signori. In general, Renato Palumbo’s conception seemed tight paced, allowing however the protagonists much greater freedom of tempi in their individua. Photo Branco Gaica