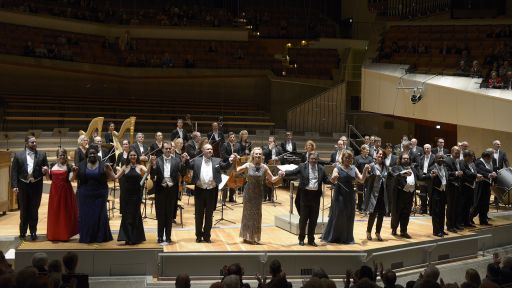 2014 marks the 150th birthday of Richard Strauss and the 65th anniversary of his death. That would have given enough reason for some new production of at least one of his operas at the three Berlin opera houses. There were only a few performances of Harry Kupfer’s nearly 30 year old production of Salome at the Berliner Staatsoper earlier this year and the theater is at least planning a new production of Ariadne auf Naxos in June 2015. The Deutsche Oper is undergoing some reconstruction and has now performed the same opera in a concert at the Philharmonie.
Ulf Schirmer, director and chief conductor of the Oper Leipzig, is a well-known specialist in operas by Wagner and Strauss having conducted the new productions of Tannhäuser and Die Frau ohne Schatten at the Deutsche Oper Berlin a couple of years ago. I am sorry to say that he is likely to have mistaken Ariadne for either of them. Even though the comparably small orchestra looked a little lost on the stage of the big hall at the Philharmonie and the prelude started in a sublime and unusually dynamic way, the music soon turned into a heavy and slow wall of sound that did not carry the singers through but left them alone with the complex score. It was a sort of making music next to each other rather than together. On top of it the orchestra was playing so slowly that Meagan Miller needed to interrupt the vocal line to breathe amidst the beginning of Ariadne’s first monologue “Ein Schönes war”. In fact star soprano Anja Harteros had been invited to sing the title role but called it off and Ms Miller stood in for her. She deserves respect to have done so but did not meet all expectations towards the title role. She is able to develop fine lyrical phrases all right and can partly make a point by convincingly long melodic passages but the voice tends to a strong tremolo that makes it not really charming. Stefan Vinke gave his Berlin debut as Bacchus. His light and rather lyrical tenor manages every note but does not always feel at ease in the upper pitch and lacks some heroic sound. The dedicated Daniela Sindram sang the enthusiastic part of the composer but her mezzo seems too mature for the aspiring young man who is the focal point of the prologue. Lots of his phrases had been heard before in a more lovely and poetic way by titans such as Seefried, Jurinac, Ludwig. The statement that sopranos are the better composers seems to be a killer argument but true. The composer’s music master was sung by Markus Brück whose nasal rasping baritone and partly inexact singing hardly go with the philosophical mellowness of the character. The Danish soprano Susanne Elmark is a highly attractive Zerbinetta with long blonde hair. Her voice is not big but pleasant-sounding and yet not brilliant enough to cope with the admittedly enormous vocal requirements. She was often drowned by the orchestra and whenever she was audible her diction left something to be desired. The male quartet of her Commedia dell’Arte companions sang homogeneously with Paul Kaufmann’s high tenor (Brighella) and Tobias Kehrer’s powerful bass standing out. As good the young baritone Carlton Ford was at Harlekin’s solo scenes such as “Lieben, Hassen, Hoffen, Zagen” as much he fell short in the quartet. The female trio of the nymphs Naiad, Dryad and Echo consisted of different voices which mixed very well. Siobhan Stagg fascinated by marvellous and fluent passages at the higher pitch while Ronnita Miller’s velvety contralto impressed generally but did not develop the beautiful phrase “Aus den Armen ihr entwunden” properly and Elena Tsallagova contributed crystal-clear echoes and sometimes Slavonic cool tones. Thomas Blondelle used his impeccable and strong lyrical tenor for a convincing but unfortunately short portrayal of the dancing master and did not show any lack of humour. The 90 year old Franz Mazura, once a much sought-after Alberich, Klingsor and Dr. Schön, reappeared successfully in the speaking role of the Majordomo.
Altogether it was an evening of mixed feelings and not really up to the standards of a big opera house like the Deutsche Oper Berlin. Personally, I had never been so little touched by an Ariadne finale than on that night. Photos by Bettina Stöß