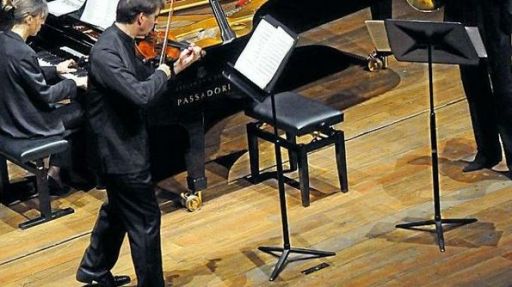 Philippe Graffin, violin, Claire Désert, piano and Marie Luise Neunecker, French horn offered an enticing and stimulating programme at Verona’s Teatro Ristori for the Amici della Musica Society Concert Series. A captivating idea to begin the concert with Brahms’ Trio and to end it with the trio Ligeti wrote for the same instruments, dedicated to Brahms. At the centre of the programme there was also a game of references and juxtapositions. Two works for violin and piano by contemporaries, Arnold Schoenberg and Fritz Kreisler, stylistically worlds apart, but both refugees in the USA during World War II, were played back to back. Then there was the intense lyricism and elan of the Adagio and Allegro for horn and piano by Schumann to whom Brahms was tied by reciprocal devotion. With the exception of this last piece, all the others have within them to a greater or lesser degree the direct influence of Viennese and Hungarian folk music. A programme carefully meditated and attentively constructed, which provided the performers with scope to demonstrate their artistic calibre and instrumental skills.
The Brahms’ Trio for piano,violin and horn in E flat major op.40, was characterized by an unmannered, direct approach, sustained by technical mastery, and a scrupulous attention to markings without sacrificing imaginative eloquence; characteristics which dominated the evening’s performance. Each individual voice was perfectly balanced in weight and dynamics with the others, the contrapuntal lines always crisp, clear and articulated. Especially in the dove-tailing, Marie Luise Neunecker managed to blend her sound to the extent that her phrases disappeared into those of the other instruments. The pianist, Claire Désert, deployed a wide range of dynamics and fullness of tone without ever rising above the others, but embracing a continuous dialogue with them. The group attained almost imperceptible pianissimi which would have been challenging to an all string ensemble. Philippe Grafin maintained his sweet tone and warm vibrato throughout, the elegance of his bowing drawing out a continuous flow of expression, passing instantly from incisive, to poetic, from assertive to wistful. He propelled the group with his innate elan judging the tempi beautifully.
In Arnold Schoenberg’s Fantasia for violin op.47 the solo violin part is of an extreme technical difficulty with daring double-stops, simple and double vertiginous intervals and all manner of instrumental effects. Notwithstanding its difficulty, which is aimed principally at enriching the internal canvas of the work, its structure resembling a Bach Partita, the nature of the work is not ostentatious The piano part is dissociated from that of the violin, evident in the practically total absence of thematic relations between the two. Grafin confronted the work with technical and structural rigour emanating a sense of breadth, technical ease and security. Désert was unerringly synchronized with the violin part when called for, but simultaneously maintained her own independence and character. Although the Fantasy is not one of Schoenberg’s most extremely expressionist works, the contrast with his contemporary Fritz Kreisler’s March Miniature Viennoise, and Liebesleid, was absolute.
Grafin, buoyed by Désert, conveyed the levity and wistfulness with his sweet tone and expressive phrasing, his gentleness and refinement; a portamento here and there, but little or no space for expansive tempi or rubati. He preferred an understated and more intimate version, eschewing playing to the gallery, as it is reputed Kreisler himself did. The bright zestful march which sounds straight out of an operetta could have stood a little less reverence.
After the interval, Marie Luise Neunecker accompanied by Desert brought us back to the lusciousness of Robert Schumann’s Adagio and Allegro in A flat major op. 70 for horn and piano. The work uses the entire range and versatility of the horn especially the mellow veiled timbre and the velvety, smooth, dark shades of the instrument. The poetical Adagio, intimate and passionate(Mit innigem Ausdruck), is linked, without interruption, to the Allegro which has a rondò structure introduced by a brilliant and vigorous ritornello. At the climax the theme of the Adagio is evoked, in canon, in a magical reminiscence. Neunecker alternated a smooth legato and burnished timbre of the lyrical Adagio with a well-defined articulation of this challenging Allegro supported by irreproachable intonation, and sustained musical lines. Particularly effective, was the close connection with the piano part rich in evocative cross-reference and echoes, which created an especially dense polyphonic fabric.
The last piece in the programme was Gyorgy Ligeti’s Trio for piano, violin and horn(1982). This homage to Brahms marks a turning point in Ligeti’s production. Neither modern nor post-modern, it has a four movement lay-out, motivic continuity, a scherzo in clear ternary form and a Passacaglia for the last movement, a form dear to Brahms. An especially prominent Brahmsian feature which Ligeti uses insistently is that of cross-rythms, especially in the exhilarating II° movement which recalls wild folk dances, and where he superimposes secondary metres, brilliantly executed by Claire Désert. The moving final Adagio lament cannot but suggest the bleak Adagio Mesto of the Brahms Trio. In this last work the trio gave their most profound performance, highlighting the dramatic textual contrasts, the rhythmic inventiveness and evoking Ligeti’s wide expressive and rarefied world with exquisite sensitivity. Foto Brenzoni