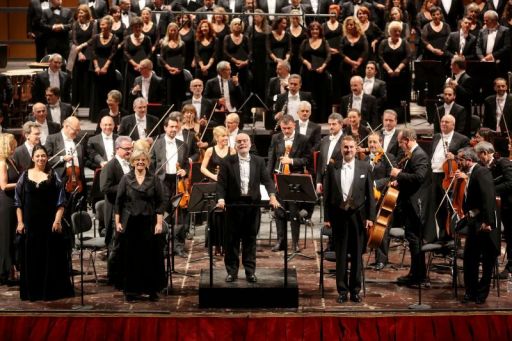 Verona: Beethoven’s 9th at the Filarmonico

The performance of Beethoven’s Ninth Symphony, as part of the Fondazione Arena’s winter season programme at the Teatro Filarmonico in Verona, was preceded by a brief encomium of the evening’s conductor, Ton Koopman, by the artistic director Paolo Gavazzeni, and the presentation of a medal of honour to him from the City of Verona. It seems that Koopman has resided in Verona over the last thirty years but despite his fame, this is the first time he has been engaged by the city’s most important musical institution.
The world renowned Dutch harpsichordist, organist, musicologist, is also founder(in 1979) and conductor of the Baroque Orchestra and Choir(1992) and Honorary Member of the Royal Academy of Music in London. His recordings, under various labels, as both soloist and conductor are innumerable as are his editions and critical appraisals, and he has performed extensively in the world’s most prestigious concert halls. Koopman, a leading exponent of “informed authentic performance”, concentrates on Baroque music, especially that of Bach and Buxtehude, and for the significance of his scholarship, in 2012 was awarded the Buxtehude Prize of the City of Lübeck and the Bach Prize of the City of Leipzig. It is reported that he has said to “draw the line at Mozart’s death”(1791).
Before the first performance of the concert on Friday 31st October, a feeling of expectancy was palpable amongst the audience, curious to hear a refreshing interpretation of a much loved masterpiece. The premises were, for an uncommon if not unconventional interpretive perspective of the symphony. Unfortunately, it was evident right from the beginning of the concert that Koopman and the orchestra spoke different languages. Koopman’s objectives were often lost on an orchestra who didn’t share his lexicon. In the contemporary musical scene, specialist “informed authentic groups” abound. The orchestra and chorus of this company has an identity strongly rooted in Italian opera at its lushest, and in the Arena, at its most monumental, and is clearly not accustomed to a specialist Baroque style. Even their concert repertoire rarely goes back before Haydn and in any case their instruments are strictly modern. The orchestra, which in bursts and starts tried to apply stylistic Baroque conventions, often seemed bewildered and unconvinced, with resulting inconsistencies, hesitancies, insecure entries and untidy articulation: notes with swells and faint-hearted endings. The overall effect was rather disjointed and the musical lines, especially in the lyrical third movement lacked smoothness and continuity. With the outer movements lacking dramatic tension and contrasting timbres, and the third lacking intensity and a lyrical legato, the most satisfying of all was the second movement. The pace throughout the symphony was brisk and Koopman’s conducting was particularly energetic and vigorous. While this gave a sense of breathlessness in the first, third and fourth movements, it suited the second movement perfectly. The scherzo was light and transparent. The articulation was clear and clean, and the dynamics refined and pure. The different voices emerged clearly and focused in the string fugato, as they had in the overlapping and alternating themes in the third movement and the contrapuntal sections in the last movement.
The chorus, not overly numerous, faced the challenge of straight-toned singing, a more contained style of vocal production than is their usual, with mixed results. Attention for clear enunciation and pure emission was evident and dynamics were carefully calibrated. But the high register, especially in the female chorus, were often forced and flat. Neither the chorus nor the orchestra managed to amalgamate within their individual sections nor within the ensemble. The vocal soloists gave a balanced and elegant performance. The soprano Yetzebel Arias Fernandez crowned the solo quartet of Bogna Bartosz, mezzo-soprano, Jörg Dürmüller, tenor, and Christian Senn, baritone, with a sweet and effortless line. Christian Senn’s delivery of the recitative, “ O Freunde, nicht diese Töne” was firm, authoritative and even, and his timbre round and rich. Jörg Dürmüller’s “Froh, wie seine Sonnen fliegen” was convincingly strong and heroic. The fact that the symphony came to a rather self-controlled close could account for the warm but not ecstatic applause at the end. Photo Ennevi