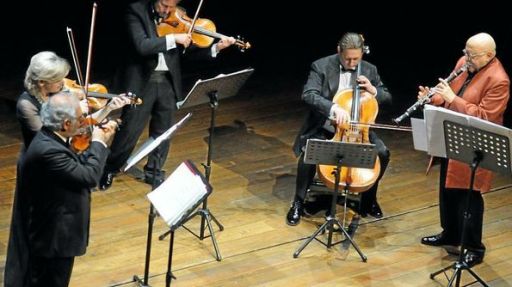 An all embracing evening which began with a lone clarinetist wending his way from the back of the stalls to the stage, proffering subdued and ostensibly spontaneous motives here and there to members of the audience as he passed. Joined on stage by the versatile and accomplished Gershwin Quartet, the programme was a gradual crescendo from a measured first half to an exhilharating and all-involving finale.
At the venerable age of 78, the multifaceted Feidman maintains the amazing rhythm of 200 concerts a year. The Veronese programme was a synthesis of his rich cultural and musical experience, which began in Argentina at the Teatro Colon, followed by 18 years with the Israeli Philharmonic Orchestra and which evolved into his life-long quest to acquaint audiences with Jewish music, which has legitimately earned him the title of King of Klezmer. Not until the evening warmed up, (in the second half) and the purely musical content was established, did the entertainer come to the fore when he started to converse with the audience in a charming Italian sprinkled with humour and a pot-pourri of English, German and Spanish.
The first half of the concert was characterized by a certain composure notwithstanding the repertoire rich in diversified elements : the plaintive Prayer by Feidman, the soul jazz of the standard Moanin’, the popular Israeli folk song, Hava Naghila, a negro spiritual Nobody knows the trouble I’ve seen, contemporary with a traditional flavour and liturgical influences In the Self, and the festive Freylach from the suite “In the Chassidic Mood” by the respected Israeli composer/arranger Gil Aldema. Feidman was definitely the soloist, soaring from the deep warm texture of his bass clarinet to the thrilling trumpeting of the penetrating high notes of his soprano. But there were already premonitory moments of the quartet excellence to come in the soulful cello solo and the sweet tone and elegant phrasing of the violin solo in In the Self. The audience was treated to the first of the unscheduled pieces of the evening with a graceful rendition of the Cilean folk song Gracias a la Vida.
The second part of the concert began with a change of atmosphere. Feidman announced another unscheduled work and left the stage to his two violinists. They gave a superb performance of the third movement of de Beriot’s 3rd Duo Concertante for two violins. Nathalia Raithel, technically secure and unselfcoscious, displayed a perfect balance between poise and drive, spinning the music forward with elegance and panache. Both she and her partner Michel Gershwin, armed with implacable rhythm and crystalline tone production, attended to every nuance and accompanying voice with discerning care. The audience was enraptured. It set the mood for an intensification of the rapport between the performers and their public for the rest of the concert. From here on, Feidman, with the aid of a microphone, conceded introductions and digressions seasoned with a discrete dose of Jewish humour. After the traditional Happy Nigun from the Klezmer Rhapsody, the String Quartet could finally demonstrate the finesse of their art, the quality of their tone, the warmth of their sound, the ease of their technique in the Georgian Folk Songs. Between the two compelling tangos, Lluvia de Estrellas and Libertango, a homage to Feidman’s original homeland, was a tribute to George Gershwin in the medley “By George…”   The fun really began with the encores. The clever, and brilliant medley woven with well-known motives including the Triumphal March from Aida, the Habanera and the Toreador song from Carmen, When the Saints come Marching In, Beethoven’s 5th Symphony, The queen of the Night, The Pink Panther, O Sole Mio, Ode to Joy, James bond and the Khachaturian’s Sabre Dance, amongst others, was presented with facetious emphasization, provoking hoots of amusement. The master stroke was drilling the audience (it should be noted of considerable talent)in a traditional Jewish song, leaving them to continue as the performers left the stage and the stage lights were turned off. “I don’t play the clarinet. I am a singer”, Giora Feidman has said. “I sing through my instrument”. And, we add, he got the audience to sing with him. Photo Brenzoni