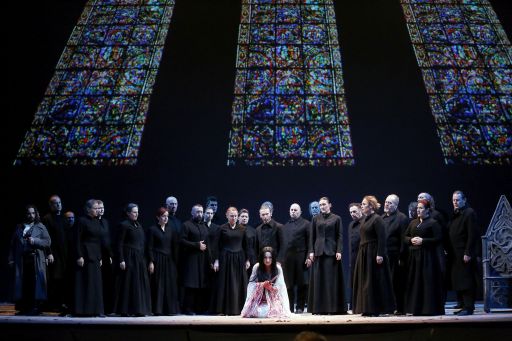 Donizetti’s Lucia di Lammermoor was an appropriate choice to inaugurate the Fondazione Arena di Verona’s winter season 2014-15 on 13th December,the feast day of Santa Lucia; the day that Veronese children receive gifts and the city is ablaze with lights and packed with street stalls. The production is that of Catania’s Teatro Massimo Bellini. The atmosphere of tragedy and desolation in this most emblematic of Romantic operas, is evoked with great simplicity. The chorus is dressed uniformly in long black; the female hair-styles, severe. The protagonists’ costumes are linear and uncluttered. The scenes are evocative, projected onto billowing drapes using strong perspective relief, severe and ominous; the moon crossed by chasing clouds in a windswept landscape, three tall Gothic stained glass windows, a fore-shortened tower observed from below. A lean setting which facilitated smooth and swift scene changes and created a sense of tempestuous romanticism in the Gothic style so dear to Romantic artists. While fundamentally traditional in inspiration, the austerity and lack of ornament in the staging, freed the production from a purely historical placement, with references which could ultimately be read as simply relics of a distant past.  The conductor, Fabrizio Maria Carminati, led the performance with flair and equilibrium. His dynamic and energetic gesture engaged chorus and orchestra propelling the performance in its more compelling moments and supporting both singers and instrumentalists in the more expressive ones.   Both orchestra and chorus were balanced, compact and homogeneous, with the dynamic level of the orchestra consistently a notch below the singers. The phrasing and accents were elegant and refined, the tone warm and expressive and the character defined. The orchestral accompaniments were delicate and transparent and displayed an attentive consideration of the vocal line.
Irina Lungu, in her debut as Lucia, gave a commendable performance. If the voice resulted a little laboured and out of focus, in the middle-lower register in the first act, in the formidable mad scene, she proved to be technically assured, revealing an exemplary clarity of articulation, command of nuance and precision in the coloratura. Her quality is warm, smooth and round, throughout the entire range. The static staging, confined to the proscenium, didn’t encourage any attempt to translate into physical movement the psychological portrait of the protagonist. Although well sung, the role was rather self-conscious and generic, lacking, at times, in very attainable contrasts. ‘Quando rapita in estasi’ and ‘Verranno a te sull’aure’ lacked the lightness that the soprano displayed later in the mad scene. Further familiarity with the role will most certainly give her the opportunity to release her greater musical and technical fluency and   develop a deeper interpretative dimension to the character in conveying a sense of her sad fortunes to the audience.
The three main male roles were a hat trick. Piero Pretti as Edgardo, Marco Di Felice as Enrico and Insung Sim as Raimondo gave convincing and commanding performances, each contributing a counterpoise to the other. Insung Sim’s burnished, rich tone, firm and articulated delivery, and polished and distinguished interpretation presented a riveting and weighty performance as Raimondo. The relaxed and natural nature of Marco Di Felice’s performance, and the gripping intensity of his interpretation made him a strong and credible Enrico. Pietro Pretti displayed an easy extension with a full and even emission over the entire range. His full and potent sound gave his characterization of Edgardo depth and strength. Alessandro Scotto Di Luzio was an admirable Arturo, Francesco Pittari was a reliable and persuasive Normanno and Elisa Balbo a fresh and dependable Alisa. Enthusiastic applause punctuated individual arias and ensembles from the beginning, with insistent and appreciative applause for all at the end of the evening. Photo Ennevi