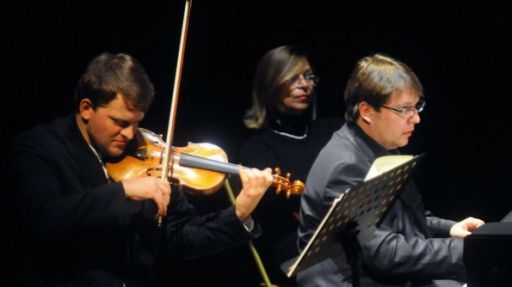 The exceptional duo, Valeriy Sokolov, violin and Evgeny Izotov, piano, gave a magistral recital at the Teatro Ristori for the Amici della Music Society’s current season in Verona on 21st January. Their profound eloquence, poise, equilibrium, sensitivity and capacity for creating expressive tension were established from the opening notes and sustained throughout the programme, engaging and enthralling the audience. Their display of technical skill, without a minimum lapse, was stunning and never ostentatious: clean and crisp, crystalline and precise. Perfect intonation and stylistically convincing. The bow work was mesmerizing, for fluidity and versatility, moving sinuously and coaxingly, rapidly or liesurely, extracting a variegated range of nuance and character. Notwithstanding the artists’ capacity to create and prolong emotional and dramatic tension, their presentation was extremely composed and devoid of mannerisms.
Inverting the first two pieces in the programme, they immediately launched into the Eroica Sonata by Beethoven, giving a compelling performance and demonstrating their total and undividible union, their technical mastery, and their musical maturity. They seemed different voices of the same instrument expoiting the alternation of the thematic material in a complete parity of dialogue between them, demonstrating their total interdependence. Solokov was incessantly taut with energy and dramatic vigour, and Izotov delivered the dark and threatening mood in the hammering staccatos, the turbulent scales. The violin line shone through, with a throaty fullness in the lower register and with haunting sweetness in the higher(especially in the second movement). The rich texture of the violin sonority, and the urgency expressed in the piano part, gave weight and intensity to the dramatic thrust. They exchanged with equanimity the long overlapping melodic lines, tempestuous configurations and unusual declamatory and percussive features and the shifted accents in the Scherzo were heavily underlined.
The two soloists were again perfectly in syntony in Schubert’s Duo Sonata with its overtones of popular Volklied. Their musical sensibility was displayed in the exquisite balance between the graceful lyricism and rippling accompaniments of the first movement, the alternative joyful and cantabile second movement Scherzo strongly tied in thematic unity with the Allegro Vivace of the last movement, and the two contrasting themes of the delicate Andantino.
The second half of the programme was mostly taken up with the remarkable Sonata n°1 by Béla Bártok. With absolute rigour, every possible technical and expressive detail was highlighted and elaborated, the rhythmic vitality unleashed, the virtuoso nonchalantly acquitted and the purity of the rarefied beauty of the Adagio shaped. Both players displayed the extraordinary agility required, leaping from one end of the range to the other, confronting the rhythmic intricacies, whirlwhind tempi and the improvisatory air. Each part is independent of the other leaving the two artists as soloists rhapsodizing with each other. The effect was powerful.
The last piece on the programme was Saint Saëns Introduction and Rondo Capriccioso, a virtuoso favourite of violinists. The piece was composed for the virtuoso Pablo de Saraste and it was no surprise to learn that at 13, Sokolov won the Study Grant Prize at the Pablo Saraste International Competition in Pamplona. A superlative rendition, exciting and sparkling, but controlled and focussed at the same time. The agility was perfect, played with an ease that belied its difficulty. Never a thrown bow or an untidy note, but spontaneous and elegant. The evening ended with the delightful Habanera by Ravel as an encore. Foto Brenzoni