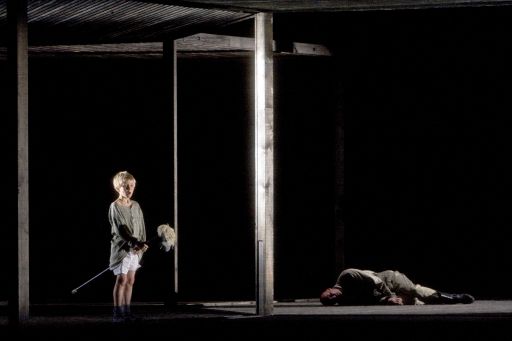 Staatsoper Berlin – Season 2014/2015
“WOZZECK”
Opera in three acts after Georg Büchner’s drama “Woyzeck”
Music by Alban Berg
Wozzeck MICHAEL VOLLE
Marie MARINA PRUDENSKAYA
Drum-major JOHN DASZAK
Andres FLORIAN HOFFMANN
Captain GRAHAM CLARK
Doctor PAVLO HUNKA
Margret KATHARINA KAMMERLOHER
1st apprentice JÜRGEN LINN
2nd apprentice JOHANN WERNER PREIN
Madman HEINZ ZEDNIK
Soldier JAROSLAV ROGACZEWSKI
Marie’s boy LOUISBRIAN DRAKE BENNETT
Staatsopernchor. Staatskapelle Berlin
Kinderchor der Staatsoper Unter den Linden
Conductor Daniel Barenboim
Chorus Frank Flade
Production Andrea Breth
Stage Martin Zehetgruber
Costumes Silke Willett, Marc Weeger
Light Olaf Freese
Berlin,  6th March 2015
After nearly 90 minutes without a break you will leave the Schillertheater with an uncomfortable feeling to have seen something unique, shared a moment that unites you with other folks in the audience yet thrilled to be a part of something truly extraordinary. All is depressing in this work, there is no optimism. Everything is gloomy and this doom leads to a disaster that seems to be as inevitable as logical. Andrea Breth has surpassed herself with this production of Alban Berg’s Wozzeck. The visionary strictness she gets the popular piece out of the production trap of poor people kitsch with congenially meets Daniel Barenboim’s compelling penetration of the score to make the Staatskapelle Berlin play in a transparent, flowing and poignant way particularly in the symphonic interludes. Berg’s Espressivo shows to advantage without glossing over the radical and drastic music that comments the brute force of the action up to the smallest details. The five scenes of the 1st act take place in cramped rooms or claustrophobic cells with wooden bars in the background so that they are not totally closed (stage by Martin Zehetgruber). In the second scene, Wozzeck and Andres are not cutting wood but skinning rabbits. In a corner of the small room you can see a pile of skins, Andres all smeared with blood. Like that Andrea Breth creates new images and associations that underline the depressing atmosphere of the plot. Only in the 2nd act the space opens up and the wooden hexagon construction on the revolting stage becomes visible for the encounter scene of Captain and Doctor. Less confinement does not mean a less confined world. The scene in the pub is already set in the barracks and the hunting chorus is sung outside with the singers of the Staatsopernchor just poking their arms through the bars. There is a rape on one side, a woman throwing up in the toilet, Marie showing up from time to time to dance insanely with Drum-major. Wozzeck is already faced with his tragic forebodings and the multiple scene takes his condition to another level of desperation. The stage is completely left empty but dark for the murder scene. At the end Marie’s son is alone – the Kinderchor der Staatsoper Unter den Linden singing from the orchestra pit – as the probably most tragic figure of the story, perhaps more than any other in this production: he is condemned to life with a bastard-orphan label and already emotionally damaged. The production dates back to 2011 and for this series of performances the cast is still the one of the première apart from the title role and Marie who is portrayed as a young beautiful woman dreaming of a better life and torn between love out of motherly instincts and hate for her son as the reason for her present life. Marina Prudenskaya lends her luxurious mezzo and highly attractive appearance to the role and sings it with breathtaking beauty making all vocal extremes forgotten. In that respect she greatly resembles her predecessor in the role at the Berliner Staatsoper in the 1970s: Gisela Schröter recorded along with Theo Adam in the title role under the baton of Herbert Kegel in Leipzig in 1973. Michael Volle has taken over from Roman Trekel as Wozzeck. He is the desperate tragic anti-hero from the beginning on. His powerful and expressive baritone masters all vocal requirements including Berg’s Sprechgesang. The versatile tenor John Daszak is an optically ideal Drum-major thanks to his foam material muscle costume, tenor veteran Graham Clark makes almost forget the tricky tessitura of the part of the Captain and Pavlo Hunka is an aspiring and megalomaniac Doctor. Florian Hoffmann as Andres, Katharina Kammerloher as Margret and above all the Viennese tenor legend Heinz Zednik as Madman complete the highly competent cast. Photo Bernd Uhlig