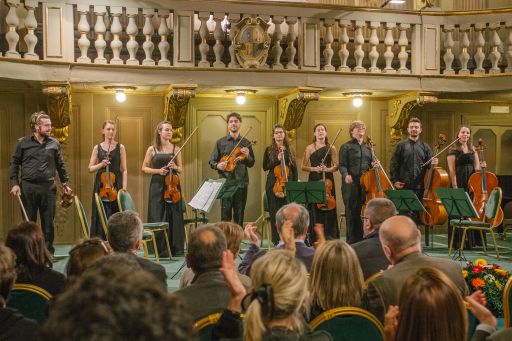 The prize winners’ concert of the 6th edition of the Geminiani Competition(Premio Francesco Geminiani) for string players took place, for the 6th time, in the prestigious and historic Sala Maffeiana in Verona’s Teatro Filarmonico, on 19th March, 2015. An auspicious venue, for the young prize winners. The fourteen year old Mozart played there during his Italian concert tour in 1770, and was nominated “honorary maestro” by the astounded academics. The competition is dedicated to the illustrious 18th century violinist and composer, from Lucca in Tuscany, Francesco Geminiani. Today he is revered above all as author of a famous treatise on the technique and didactics of the art of violin playing.
The competition, conceived and organized by Lucio Lombardi, Umberto Forni and Carla Lencioni, takes place every two years. Rather uniquely, as prizes, it offers precious Italian instruments of indisputible quality on loan for the intervening two years. This gives the budding young artists concrete help at the beginning of their careers, enabling them to display their talents to the best advantage. Another unique aspect of the competition is, that the prize winners’ concert is devoted to chamber music, taking the emphasis off individual bravura and promoting the enjoyment of ensemble music making. It was also a wonderful opportunity for the audience to appreciate and compare the particular qualities of each instrument.
The winners of the last two editions, from all parts of Italy, Moldavia and the Czech Republic, came together for 4 days, to rehearse under the guidance of the renowned cellist Pietro Bosna in preparation for the concert. The programme included Quintet for 2 violins, viola and 2 cellos in C major G 310 by Luigi Boccherini, the first four movements of Serenata for String Trio in D major op. 8 by Ludwig van Beethoven and Felix Mendelssohn’s Octet for Strings in E flat major op.20. The young performers gave polished performances displaying technical mastery and a fresh and effervescent manner. The Boccherini was captivating in its elegance and transparency, the tone quality was both firm and sweet, with expressive and expansive bowing, and a strong communicative flow between the parts: Lucia Zanoni, Anica-Dumitrita Vieru, violins, Sara Marzadori, viola and Fabio Fausone and Ludovica Rana, cello. A special prominence and agility given by Boccherini, himself the court cellist, to the first cello part was executed with panache and bravura by Fabio Fausone.
Beethoven’s Serenata for Strings with its technically engaging opening, its initial lively and brilliant tempo of a strong martial character, and the overall density of its writing, was an effective contrast to the preceding work and was persuasively presented by the young artists, Matous Peruska, Ester Carturan and Adriano Melucci. The fiendishly difficult Adagio with the sweeping phrases played in octaves by the violin and viola was a challenging, albeit, hazardous choice. The joyous buoyant Polacca, articulated and crisp as each instrument took the fore, was executed with spirit and taste and its charming and unexpected ending proved a felicitous closure.
The major work of the evening, which united all the winners minus one, the Mendelssohn String Octet in E-flat major, Op.20 was another apt choice for the occasion beyond its purely musical merits. Unbelievably, this appealing and fascinating work, a double string quartet, innovative in instrumentation and in its treatment of the instruments, was written when Mendelssohn, was only 16. The young artists played with great transport and with the youthful verve and brilliance Mendelssohn intended. Matous Peruska rose to the soaring principal violin theme and the considerable demands made of the first violin in the opening section, supported by a luxurious tapestry of sound from the others. Each of his companions took advantage of the chance to exploit changes in texture, dynamic variation and changes of mood provided by the central development section, the fluidity and delicate balance of parts in the gently thoughtful second movement, the levity and crispness of the mysterious and ghostly third, the gleefully spontaneous weavings of rapid fugue subject that ascends through all eight instruments and proceeds to cover a complete assortment of contrapuntal writing techniques and widespread modulation in the last mo vement.. Musically their performance was cohesive and taut, bursting with effortless vitality and exuberance. In response to the warm and insistent applause, all nine prize winners, strumming their instruments, offered the entertaining and popular 5th movement Passa Calle from Boccherini’s quintetto ‘Musica notturna delle strade di Madrid’ as an encore. Foto Gianluca Stradiotto