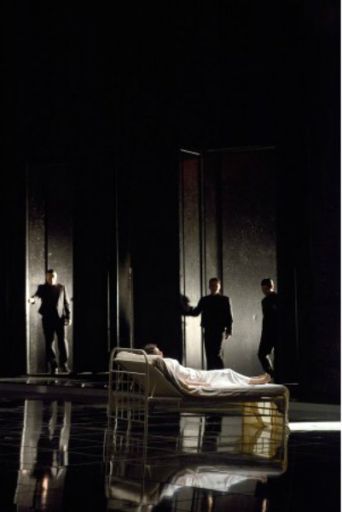 A 123rd repertory performance can be amazing, even thrilling. Giuseppe Verdi’s highly popular La Traviata may not be among my favourites and the opera night must be extraordinary to make me sit on the edge of my seat. I admit that the title role is as demanding as rewarding and used to be one of Maria Callas’ battle horses who said that a singer in fact needed four voices for the role, one for each scene, which may even turn out as an advantage for a singer whether she comes from the coloratura, lyrical or dramatic repertory. Most great primadonnas of the past succeeded in it and not all of them had the vocal and artistic range of Maria Callas. I recall how surprised I was by a CD with Mozart arias about 15 years ago sung by the Romanian soprano Elena Mosuc who I saw as a brilliant Zerbinetta a few years later. When I heard that she would stand in for Marina Rebeka I was even more looking forward to this Traviata. I was right: her interpretation of the demanding role was fabulous in every respect. She dominated the stage not only vocally throughout the performance supported by one of the last productions of the late director of Deutsche Oper Berlin, Götz Friedrich. His clear Personenregie is focused on Violetta. He gives her a lot of space and makes her stand out against the society dressed in black and white. At the end she is not the one who has gone astray, she has been the centre that the others have circled around all the time. Prejudice and social restrictions do not bother her. Frank Phillipp Schlößmann designed a uniform stage in dominating black that serves all scenes of the opera with changes to the backdrop. Thus Violetta’s death is symbolically anticipated by huge trees overturned behind the tall open doors. Like during the prelude at the beginning her bed is in the middle of the stage. Flora’s ball scene becomes lively by Friedrich’s detailed Musiktheater production á la Felsenstein and the excellent Chor der Deutschen Oper Berlin (Chorus master Thomas Richter, choreography by Klaus Beelitz). I know very well that times have long gone by when singers could show off their vocal possibilities. We find stories funny like the one Frida Leider mentioned in her memoires: she once saw a Traviata at a Berlin opera house with a famous Italian singer who added an endless trill to the Brindisi while walking all around the big round table and the conductor angrily threw the baton down. Maria Callas liked singing extra acuti in her early years especially to impress the Mexican audience. Elena Mosuc followed in her footsteps and crowned the end of the Brindisi and Flora’s ball scene with some extra acuti. Brava! Yosep Kang has developed an international career out of the company of Deutsche Oper Berlin. His Alfredo is impeccably sung with an amazing breathing technique and effortless emission combined with a slightly open singing. He crowns the stretta with a radiant top C. The voice does not have a particular timbre and he makes an effort to act convincingly but remains somehow self-conscious. His father Giorgio Germont was splendidly sung by the Franco-Canadian baritone Jean-Francois Lapointe who made the big duet a highlight along with La Mosuc. His voice is warm, plush and well-balanced. The young Croatian conductor Ivan Repusic is highly competent in the Italian repertory and he makes the Orchester der Deutschen Oper sound gleaming and passionate with the right dynamic pace never overpowering the singers. Amira Elmadfa replaced Christina Sidak as Flora by mainly impressing by her attractive appearance. Elbenita Kajtazi is a compassionate Annina while Gideon Poppe, Seth Carico and Carlton Ford complete the cast as Gastone, Barone Douphol and Marchese d’Obigny, respectively. A wonderful night at the opera reviving the era Götz Friedrich as the director of Deutsche Oper!