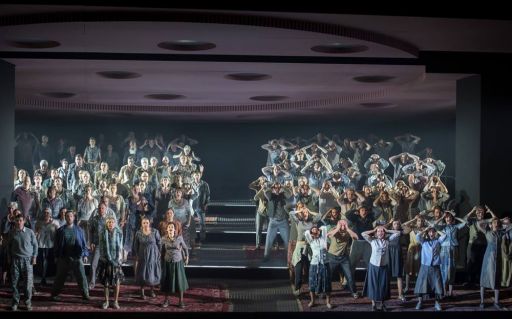 Komische Oper Berlin – Season 2014/2015
“MOSES UND ARON”
Opera in two acts
Text and music by Arnold Schönberg
Moses ROBERT HAYWARD
Aron ANDREAS CONRAD
Young girl JULIA GIEBEL
Sick woman KAROLINA GUMOS
Youth MICHAEL PFLUMM
Naked youth JOHANNES DUNZ
Man/Ephraimite TOM ERIK LIE
Priest JENS LARSEN
Four naked virgins JULIA GIEBEL, KAROLINA GUMOS, SHEIDA DAMGHANI,  ZOE KISSA
Voice from the burning bush JULIA GIEBEL, KAROLINA GUMOS, CAREN VAN OIJEN, MICHAEL PFLUMM, TOM ERIK LIE, JENS LARSEN
Three old men TIM DIETRICH, HENRIK PITT, MATTHIAS SPENKE
Dancers MERI AHMANIEMI, CSABA NAGY, SHANE DICKSON, ZOLTAN FEKETE
Soloists of the Chor der Komischen Oper Berlin
Kinderchor and supernumeraries of the Komische Oper Berlin
Vocalconsort Berlin
Orchester der Komischen Oper Berlin
Conductor Vladimir Jurowski
Chorus Master David Cavelius
Kinderchor Dagmar Fiebach
Production Barrie Kosky
Stage and light Klaus Grünberg
Costumes Klaus Bruns
Choreography „Golden calf“ Hakan T. Aslan
Berlin,  24th April 2015
Since Barrie Kosky became artistic director of the Komische Oper Berlin in 2012, he has succeeded in staging a wide range of works from baroque opera by Rameau to Bernstein’s “West Side Story”. Nearly 200 actors, more than 100 chorus rehearsals and an austere but beautiful score: it is not an easy job to produce Arnold Schönberg’s Opus magnum “Moses und Aron” called opera but it is rather an oratorio, narrative rather than action-packed. Kosky presents a production with a lot of variety and seeing it once will probably not do to discover all its mysteries and subtleties. Drawing on a treasure of thousands of years of a Jewish picture world, he tells of the exodus of the Israelites as a parable of the seeking man as such. That results in impressive chorus scenes precisely and elaborately staged in the tradition of Felsenstein’s Bewegungsregie. Moses and Aron are two down-at-heel jokers like Wladimir and Estragon in Beckett’s “En attendant Godot” whose dialogues are partly cited and displayed twice on a screen. Consequently they use their magic tricks to implement biblical wonders such as turning a rod into a snake to show the crowd how a rigid idea can be made flexible. The comparably small stage by Klaus Grünberg is left empty apart from some handrails and Persian carpets spread around, one of which Moses wraps himself out at the beginning to cover himself with one at the end of the opera night without an interval. The stage is dominated by the people anyway. They get in over stage-wide stairs in the backdrop. Twelve round lamps light the stage from the low-hanging ceiling. As superstitious and afraid of the number 13 as Schönberg was, he even omitted one “a” in Aaron so that the title of the opera had 12 letters only. Ironically enough, he died on Friday, 13th July 1951. He had finished two acts of his Opus magnum before he left Germany for good when the Nazis came to power in 1933. He never composed the 3rd act, only a few sketches. Moses’s last words “O Wort, du Wort, das mir fehlt!” with the underlying crescendo-decrescendo on the last note played by the violins is like a last echo, the perfect end of the opera. Some art pieces simply need to remain unfinished. The contradiction between Moses, the man of thoughts and his brother Aron, the man of words and pictures is indissoluble after all. Another dialectic aspect becomes obvious: people need leaders or heroes but will develop into individuals. The excellent Chor der Komischen Oper (chorus master David Cavelius) supported by the Kinderchor (chorus master Dagmar Fiebach), supernumeraries and the Vocalconsort Berlin is undoubtedly the centre of the production. They dance around the Golden calf when Kosky leaves the bible and conjures up the Jews’ tale of woe including Schönberg’s in an operetta-like style of the 1920s. Dolls with oversized masks of Theodor Herzl and Sigmund Freud are filming with an old-fashioned camera the dance of alluring show girls and boys (choreography by Hakan T. Aslan) in golden costumes by Klaus Bruns. It is in the same way Kosky’s brilliant idea to double the crowd by man-sized dolls that end up on a heap of corpses symbolizing the fate of Abraham’s successors. Kosky tells of pogroms and the Holocaust to return to Moses who climbs down from the heap, the tablets of the laws are written on his body with blood… A great opera night of mentally demanding Musiktheater also thanks to the Russian conductor Vladimir Jurowski whose career started at the Komische Oper twenty years ago and soon led him to the big concert halls and opera houses in the world. Now he has returned for the production commemorating the 70th anniversary of the liberation of the Auschwitz concentration camp. He musically connects Kosky’s associating pictures with the complex twelve-tone score in a masterful and mysterious way, light and gloomy, lively and passionate at the same time. He drives the Orchester der Komischen Oper to a maximum of performance. I admit that Robert Hayward as Moses cannot compete with the illustrious predecessors of the role such as Josef Greindl, Theo Adam, Franz Mazura, Werner Haseleu, Hans Hotter, John Tomlinson but he fits into Kosky’s approach pretty well. Andreas Conrad’s Aron is a charming magician, seducer of the crowd whose character tenor is well-focussed and slightly overtaxed at times. Despite the extravagant musical and scenic mass performance, the soloists Julia Giebel, Karolina Gumos, Tom Erik Lie and Jens Larsen stood out. Photo Monika Rittershaus