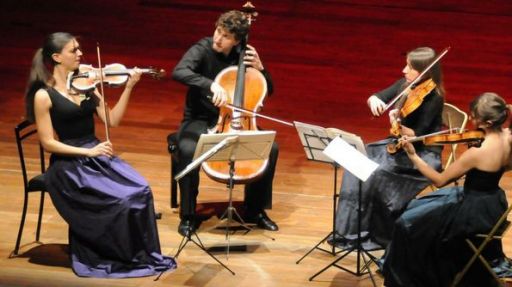 The Amici della Musica Society of Verona presented the young but already established string quartet, Lyskamm Quartet in the penultimate concert of their concert series, in a programme which began with early works by Haydn and Shoshtakovitch and endedwith the third and last of Beethoven’s imposing and ground-breaking Razumovsky quartets. Due to the prominence of their instruments in the opening bars, the violinist Cecilia Ziano and the cellist giorgio Casati asserted their instrumental and musical personalities immediately: the first violin Cecilia Ziano in a refined and rarefied research for a unique timbre and sonority and Giorgio Casati in a free and flowing command of his musical line often detached from the printed page. The inner parts, although in complete balance and empathy with them, took longer for their presence to stand out. The violist Francesca Piccioni surfaced with a warm, smooth expressiveness most discernibly in the Razumovsky as did Clara Francesca Schötensack.
Cecilia Ziano set the tone for the early Haydn with a rather reserved and detached air of elegant sobriety, eliciting a sound of a delicate and, at times, almost inaudible consistency. Assertive without being domineering, her musical self-assurance and composure exerted a sense of absolute control. All players were finely aware of their individual roles and were attentive to the subtleties and complexities of the writing. The innovative and discorsive Haydn of the first of his Russian Quartets, was well-crafted and meticulously rendered and was followed by Shostakovitch’s first attempt at the quartet form. It was delivered with a crispness and freshness of articulation and sound, with particular attention devoted to dynamic finesse and an exemplary equilibrium between the parts.
The elaborate and eloquent scoring and the structural density of the Razumovsky , gave the quartet the opportunity to fully express their dramatic skill and emotional range, in the suspended chords of the brief introduction, the intensity of the Allegro vivace, the rapt and doleful Andante, the elegant Minuet and the energetic fugue of the Finale. Engaging and exciting, the accumulation of tension rose in a gradual ascent to the riveting conclusion. An enthusiastic audience was rewarded with a moving performance of the second movement, andantino, from Giuseppe Verdi’s String Quartet. Photo Brenzoni