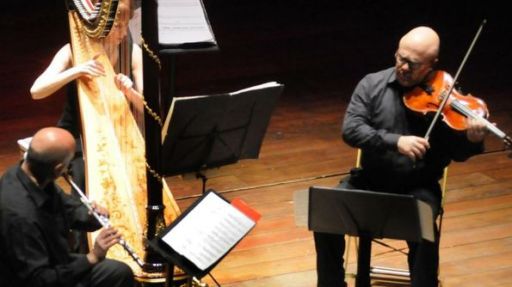 A beautifully tailored programme for the infrequently heard combination of flute, harp and viola was presented at the latest concert for the Amici della Musica in Verona at the Teatro Ristori. The members of the ensemble, Triolet, Lucia Bova, harp, Manuel Zurria, flute and Luca Sanzò viola, share a common background as members of Rome’s, Parco della Musica Contemporanea Ensemble, the resident group which specializes in 20th century and contemporary music. The choice of works in the programme reflected this influence. In the first half, the audience seemed disorientated by the choice of alternating short solo pieces with ensemble works. However, the coolness with which the already scant audience greeted each successive appearance on stage, distinctly contrasted with the warmth of applause received at the end of each individual performance. The presence of the flute and harp, instruments favoured by Impressionist composers and eminently suitable to the spirit and atmosphere they strove to create, ensured that much of the programme would be centred around them; Bax, Debussy, Fauré and Ravel. The evening opened serenely, with the gracious and enchanting Elegiac Trio by the English composer Arnold Bax. Blending elements of Bax’s unadulterated late romanticism and impressionism, it exhuded an unmistakable English pastoral spirit, the lyrical interplay and dove-tailing between flute and viola in their medium-low registers, over a rippling harp, the Celtic character of the melodic themes and the meandering intertwining of the musical lines, all of which the trio enhanced. The easy, cascading transparency of Bova, the gentle and caressing murmur of Zurria and the full-bodied warmth, luscioussness and presence of Sanzò’s sound heightened their musical effect and the sense of elegy.  This was followed by Debussy’s brief and beautiful flute solo, inspired by the myth of Syrinx, played touchingly and soulfully by Manuel Zuria and Fauré’s Impromptu Op. 86 for Harp. Lucia Bova displayed a flexible, precise dexterity together with her ability to create an atmospheric yet lucid sonority in the dazzling, and romantic Impromptu. The first half closed with the trio New Gates by the contemporary Finnish composer Kaija Saariaho. In this work, Saariaho continues to contemplate the dimensions and explore the extremes of musical territory. From the inaudible opening on the viola, the trio held full control of the expressive range and a versatile use of timbre and texture which expanded steadily, evolving gradually in an extended exploration of sound, rhythm and instrumental colour. The second part of the programme began with the delightful Sonatine en Trois by Ravel in Salzedo’s brilliant arrangement from the original for piano. The trio delineated the musical elegance and classical structure, with the quiet internal accompaniment, the legato of the double-melody of the first movement and the conciseness and radiance and flurries in the virtuoso writing of the last. The warm singing tone, intense musicality and the firm and commanding musical grasp of Luca Sanzò’s playing in the Bax and Ravel were confirmed in the challenging sonata for Viola op. 25 n.1 by Hindemith. The free succession of 5 movements recalls Bach’s Sonatas and Partitas for solo violin. Sanzò’s was a gripping performance, and his sound exhalted the noble and generous soul of the viola’s warm contralto register. He captured the cadenza-like freedom of the first movement, the taughtness and dynamism of the second, with its richness of polyphonic implications, the breadth of the meditative and lyrical third, reminiscent of the Baroque Sarabandes, the energy of the wild, violent, rhythmic propulsion of the fourth, and the deeply expressive and composed character of the finale. The concert closed with the refined and intimistic Sonata for flute, harp and viola by Debussy. The trio communicated the elegance, emotional riserve and textural clarity of the work, in the ethereal opening, the delicate and fluid melodies and murmurings of the flute, the wispy arabesques, the juxtaposing rhythms, the articulated dialogues between the parts,and the vivacious and caleidoscopic finale. Photo Brenzoni