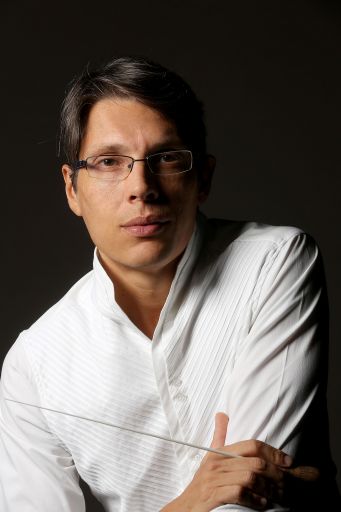 An irresistible programme for the latest concert for the Arena di Verona’s symphonic season in Verona, with the grandeur of the compelling concerto for Piano N°1, one of Brahms’ most famous and frequently performed works, and the imposing and stirring 5th symphony by Tchaikovsky. Francesco Omassini, leader of the second violins in the same orchestra, was on the podium, with Davide Cabassi, as soloist. Brahms’ Piano Concerto No.1, the first large-scale orchestral composition of Brahms, was perceived as revolutionary and totally orthodox for its time; a symphonic design broadened and integrated by the piano part. Sweeping and passionate, it has a tremendous structure, an abundance of themes and a monumental start. A large-scale symphony with piano obligato, where the piano and orchestral parts are on equal footing. It presents considerable technical challenges to the performer which Davide Cabassi confronted in a striding clear-cut manner. The consummate delicacy of the emotional core and the profusion of suspended and wandering passages were played simply and devoid of rhetoric, at the cost of moments of exquisite poignancy slipping away unnoticed. However, he captured the epic mood of the piece, where the notable technical difficult passages are never gratuitous nor mere virtuoso exhibitionism, but extend and develop the thematic material. After an initial vagueness in the substantial orchestral introduction of exceptional complexity, the orchestra proceeded to find their feet and perform with authority and compactness. Many individual performances shone out, especially in the woodwind; the bassoon’s opening, reverential chorale theme in the second movement and the enchanting phrase in thirds played with expressive and haunting beauty first by the two clarinets are just two of many notable episodes. The first horn gave a succession of splendid interventions, often accompanied by an impeccable third horn. The tympanist was perfectly balanced and refined in a commanding performance and the double-basses lent an air of gravitas throughout the evening with their authoritative and full, sustained pedal. Tchaikovsky’s 5th is the middle of a last great trilogy of symphonies whose musical ideas, the composer admitted, address great issues of Fate, Death and Providence. Grand and dignified, It undertakes a passionate journey from self-doubt to seeming triumph, embracing in a moment of inner repose the slow movement’s famous, wistful horn solo. Once again the first horn, Andrea Leasi, displayed his mastery and the the first clarinet and bassoon joined him to weave their eloquent strands, as the string section and brass gradually entered with intense participation, swept along on the wave of the lovely sighing themes and emotional swells, enriched by contrapuntal lines and instrumental sonorities, before being interrupted by the dramatic and ineluctable Fate motto. Delightful the flowing waltz movement, founded partly on a Florentine folk-song, and the scurrying balletic figure of the second theme in the strings, before ending in the relentless and triumphal last movement, with its bombastic and magnificent march. Omassini’s interpretation was not overwrought or self-absorbed. He displayed emotional directness. His gesture was flowing, his tempi brisk, fluid and purposeful. One could surmise that he knew his orchestra. The orchestra rose to the occasion and gave a stirring performance.